Based in Italy's Puglia region, the company produces handmade, top-quality sneakers and helps meet the ever-growing demand for the category. 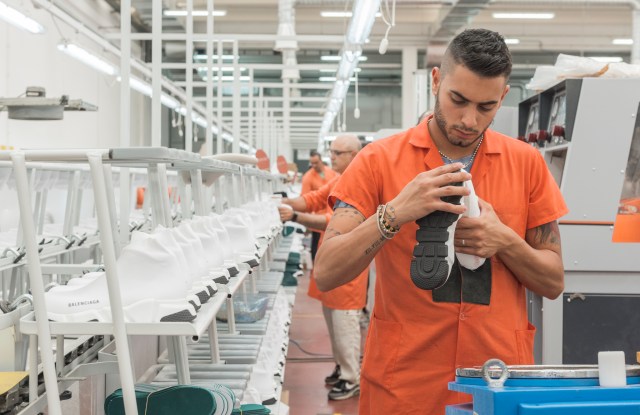 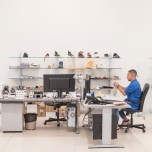 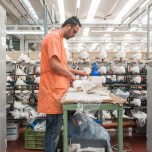 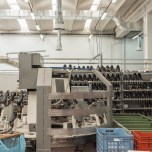 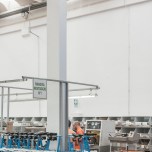 CASARANO, Italy — As word spreads that Virgin Galactic could be launching suborbital flights out of Italy’s Puglia region, a luxury footwear manufacturer in the same area is rolling out sneakers that are already out of this world — and to call them sneakers is almost inadequate.

Leo Shoes is the Made in Italy response to a sneakerhead’s wildest dream — and is helping to fuel the global sneaker fever that shows no sign of slowing.

The 2017 Worldwide Luxury Market Monitor by Bain & Company and Altagamma states that industry “players are shaping category performance through tailored strategies and investing in luxury streetwear to attract members of the Gen Y” customers, citing 10 percent growth in the luxury sneakers category, with a total business of 3.5 billion euros in 2017, compared with the previous year. Sneakers was the biggest category. By comparison, denim grew 6 percent to 3.2 billion euros, down jackets grew 15 percent to 2.3 billion euros, and T-shirts were up 25 percent to 2.5 billion euros.

The study “Mix and match the industry/the luxury and cosmetic financial factbook 2017 edition,” and its Ernst & Young analysis of Fondazione Altagamma data, states that globally, Millennials “are savvy consumers with common purchasing drivers and behaviors, regardless of geographic barriers, and casualwear is becoming the choice, even for traditionally more formal occasions.”

The study stated that 75 percent of Millennials “perceive a decrease in the appeal of formalwear in favor of casualwear,” and that premium and entry-to-luxury acceleration is boosted by five macro trends, ranging from a rising urban middle class; price increases in luxury products;  mix-and-matching brands in different price ranges; trading down as 41 percent of luxury and entry-to-luxury consumers also purchase premium luxury products, especially accessories and fast-fashion products, and casualization, with the the booming “sneakerization” as “the wave of casual sports footwear has impacted luxury brands and, in particular, the shoe category.”

As a result of the boom, the sneaker market increased its value to 3 billion euros, accounting for 19 percent of the total luxury shoe segment.

He should know. While he firmly protects the privacy of his clients, the company has garnered a reputation for producing sneakers for the world’s leading luxury brands, from Salvatore Ferragamo and Chanel to Valentino and it is a sub-supplier for Gucci, to name a few.

A walk through the plant, based near Lecce in the heel of the boot-shaped Italy — a region that is also a tourist draw for its Baroque architecture, dreamy beaches and natural beauty — is an experience. While a creative venue and extremely busy, the impression is one of order and absolute organization — no disturbing wafts or crazy loud noises here.

Artisans — men as much as women, generally young but flanked by more experienced ones, too — carefully apply intricate studded motifs or colorful Swarovski crystals to vamps and uppers. The decorations are countless, from embroideries to logos or symbols en relief. Soles are so innovative and daring they look like sculptures, evocative of a thick metal chain, a stylized wave or graphic fangs.

A worker shows how the outer sole is perfectly attached to the insole by thrusting the two elements in a vacuum drier. Another one meticulously checks for any stray leather thread — quality control is key. Each brand has its own conveyor belt to differentiate the models. There are computers, too, but it is clear they are an added asset, the workers are the main focus.

Leo Shoes taps into a market that is seemingly insatiable — which is making finding production capacity for luxury brands introducing sneakers increasingly difficult.

“Our customers, both men and women, continue to be obsessed with sneakers from all of the mega brands,” said Mario Grauso, Holt Renfrew president. “The exceptional quality coming from Italian factories obviously keeps them even more interested.”

“If Hermès, Chanel and Thom Browne manufacture sneakers in Italy, it means that the quality is undoubtedly high,” said a luxury goods consultant in Milan, who requested anonymity. “The much-hyped Balenciaga and Gucci sneakers are also produced in Italy by directly owned factories.”

The consultant said that, to respond to the request for sneakers, a cluster of entrepreneurs, with the support of “enlightened” regions such as Abruzzo, “have set up new companies, employing young people and investing in technology, focused on this category, which is less complex in terms of manufacturing compared with other luxury products such as leather goods and apparel.”

According to Italian footwear association Assocalzaturifici, the shoe sector last year reported sales of almost 14.2 billion euros, a 0.8 percent increase compared with 2016. Exports rose 3.5 percent to 9.2 billion euros, or 211.1 million pairs of shoes. The Puglia region counts 275 companies, up 5.8 percent compared with the Marche region that has 1,544 and Tuscany with 1,072. Puglia has a 3.1 percent share of Italian exports of shoes in the 2016-2017 period, stable compared with the previous year. Veneto and Tuscany have a 27.1 and 21.2 percent share, respectively.

According to Sita Ricerca, which in 2006 for the first time separated the sneaker category from the casual shoes, it accounted for 14.9 percent of total purchases of Italian families. In 2010, they had risen to 17 percent and in 2017 to 20.4 percent.

According to leading American market research company NPD Group, “sport leisure — inclusive of sport lifestyle sneakers, skate, and sport slides — was the only broad category to grow” in the second quarter, said Beth Goldstein, fashion footwear and accessories analyst. In the April to June period, total U.S. leisure footwear sales grew 7 percent to $2.9 billion compared with the same period in the previous year, while the total U.S. performance footwear category showed a 5 percent decrease to $1.7 billion.

“Athletic-inspired, non-performance footwear has driven most of the growth in the sport leisure category. Ath-leisure has taken over the athletic footwear market, and I do not expect the performance categories to improve anytime soon,” said Matt Powell, senior industry advisor, sports, at The NPD Group.

All of this puts Leo Shoes in an ideal spot.

“There is a need to be more comfortable and men care less about formalwear. How many years will it last? We are ready to change; we are not afraid of change and we changed thanks to the brands,” said Filograna Sergio.

Leo Shoes is a manifestation of the mythological phoenix, as it was founded in 2010, reborn from the ashes of a storied and hugely successful footwear manufacturer called Filanto, which was created by Filograna Sergio’s father first as a small factory in the late Forties, but skewed toward the mass market. Globalization and lower wages in countries such as China forced Filanto to gradually close in the 2011-2013 period. At its apex, Filanto, which in the U.S. worked with the likes of Nine West and Timberland, had 3,500 employees, four manufacturing complexes and produced 12 million pairs of shoes a year.

“We could not have realized how the industry would have evolved, but we understood there was a transformation, we had an intuition and saw an opening in the young shoe segment — sneaker is a superficial term. We had the right product at the right time, we were ready to respond to the market and offer a product that was just starting to develop,” Filograna Sergio explained.

“And we had a pinch of luck,” he added, downplaying the firm’s impressive growth.

Starting with a base of 30 workers, the firm now has 500 employees (plus an additional 500 who are not in-house) and expects to produce 1 million pairs in 2018. While not exactly in the scale of a Nike or Adidas, Leo Shoes has a different focus: It targets clients that “believe in Made in Italy and this is what we have invested in,” said Filograna Sergio. “It was a necessary change, daring yes, but projected in the long-term. There were hardships, but also opportunities. The world was changing quickly and we needed to look at the market in a different way. We were not certain we could create jobs, but with a precise target and a clear path to follow, we looked beyond the obstacles.”

Leo Shoes stands at number 584 out of 1,000 companies in The Financial Times’ list of Europe’s fastest-growing companies. The list ranks firms in 31 European countries that have achieved the highest compound annual growth rate in revenue between 2013 and 2016. Leo Shoes’ revenues in the 2013-2016 period rose 273 percent, with a compound annual growth rate of 55 percent. While many of the shoes can be considered unisex, the men’s category accounts for 65 to 70 percent of the total.

Smiling, Filograna Sergio admitted he relied on what he dubbed “Radio Shoe,” or word of mouth, to grow the company’s pool of clients, which currently total about 20. “The luxury world is a club,” he explained, and “there are not that many producers in the luxury range,” in the sneakers segment. The Tuscany and Veneto regions are known more for their formal shoe production, he added.

Filograna Sergio and Leo Shoes are firmly rooted in the territory, which is an advantage, he said, with a base of skilled artisans that the company also helps train. “I love Italy, I love Puglia and I care about the people here. A logistics base here, where there is so much experience, is fundamental, and we work to optimize lead time and service to the client. Our know-how is widely recognized and craftsmanship is a fundamental quality. There is nothing like a handmade shoe, neither robots nor technologies can achieve the same result,” he summed up. “We started in 2011 with one client, and we now have a waiting list [of brands].”

Filograna Sergio, however, treads carefully, as he realizes how important it is “to consolidate the relation with clients and earn their confidence in us day by day, improving service and communication.” It takes 24 to 48 hours to develop a shoe from a sketch.

“Puglia is like California, open, welcoming, with lots of sun and we want to leave a mark here,” he concluded.