In the past two months, the brand has opened its second and third stores, in Phipps Plaza in Atlanta and in East Hampton, N.Y. 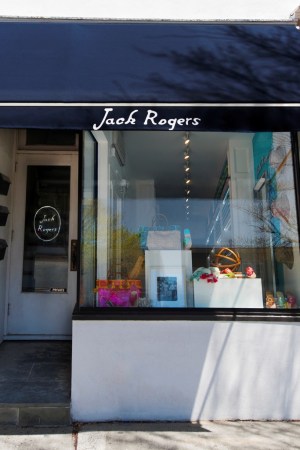 Those chic, Navajo-style sandals have a look that can go a long way.

That’s the view at Jack Rogers, which was founded in Palm Beach, Fla., in 1961 and is now sending signals that it’s ripe for developing products beyond the established footwear. “The mission is to turn Jack Rogers into a global lifestyle brand. We can triple the business in the near term,” said Clare Schultheis, the chief executive officer.

According to William M. Smith, managing partner of Global Reach Capital, which owns the brand along with Richard Mishaan and Northwood Ventures, “What we bought three years ago was the most popular selling sandal style for the last 50 years, but that’s all we bought — one sku [stockkeeping unit] in many, many colors. Since then, we’ve turned it into a nice shoe company, and we are building it into a multiproduct lifestyle brand before we sell it. We have a longer-term perspective than some private equity guys.”

Jack Rogers, said to be approaching $20 million in volume, opened its first store, on Madison Avenue between 87th and 88th Streets, in 2011. In the past two months, the second and third stores opened, in Phipps Plaza in Atlanta and in East Hampton, N.Y. Though not exactly racing to add more stores, Schultheis said retailing is “a strategic initiative” and there’s “a hit list of areas and locations” of interest, including Palm Beach, Fla.; Nantucket, Mass.; Bal Harbour, Fla., and Charlotte, N.C., with California and Florida being the brand’s best markets. “At the moment it’s opportunistic, but we are readying ourselves to be more aggressive. East Hampton is a perfect fit, given the resort, casual lifestyle aspect of our brand.” The cozy 300-square-foot shop is “super-curated and designed with a gallery feel,” Schultheis said. “It has the best of our best, the iconic sandals, as well as fashion footwear, some apparel, handbags and scarves.”

On the product side, “We are expanding beyond the sandal category to have a stronger assortment of ballerina flats, mocs and drivers, the collection will be in stores on Oct. 1,” she added. Products range from jellies to wedges and boots.

With handbags, Jack Rogers is expanding to cross bodies, and wristlets, as well as small leather goods. There’s also been some development of sportswear where the company appears to be testing the waters. The company is investing in e-commerce, seeking to make the Web site more user-friendly and intuitive. It recently relaunched and has a feature to see how a bag or a sandal would look monogrammed, and another feature to customize the color of stitching and the base of sandals.

There have been some fits and starts developing apparel, which Smith acknowledged. “I don’t think we nailed the product outside of shoes. We were doing too much.” Now there is a clearer vision for apparel, currently seen just for retailing as a complement to the footwear, which is wholesaled and retailed. “We are not reinventing the wonderful heritage and equity,” said Schultheis. “We are very much focusing on the Jack Rogers aesthetic and staying true to the classic, upscale, polished, casual chic lifestyle. The brand appeals to both mothers and daughters.”

About two months ago, Schultheis joined Jack Rogers, which for several quarters operated without a ceo, waiting for a suitable candidate. “Clare’s background is so deep in footwear, having worked at Joan & David, Cole Haan and Stuart Weitzman,” said Kristin Dennehy, managing director of Herbert Mines Associates, which recruited Schultheis to Jack Rogers. “She is a product-focused leader and can build Jack Rogers in a full lifestyle brand.”