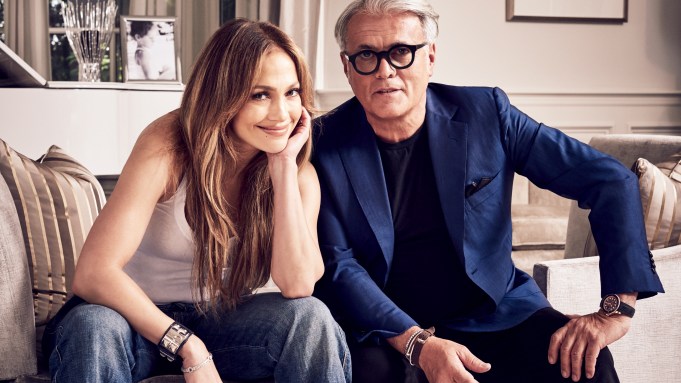 LOS ANGELES — Jennifer Lopez is a woman used to having hundreds of thousands, if not millions, of pairs of eyes fixed on her, whether it’s on a movie set, a concert stage or a red carpet. But on this day, in the sanctuary of her home here, she’s expecting a more private experience.

Lopez has just descended her curved staircase wearing a white tank top and a pair of J Brand jeans to find a small army of videographers, photographers, production assistants and executives in her family room. “Giuseppe!” she exclaims, making a beeline for Giuseppe Zanotti and enveloping him in a hug. “Why are all these people here? Maybe give us a little space so we can talk and create, right?”

The room quickly clears save for a videographer and director there to capture the occasion: The first in-person design meeting between Lopez and Zanotti, who will create a capsule shoe collection together called Giuseppe for Jennifer Lopez (#GiuseppexJennifer). The line will be shown at Footwear Fashion Association of New York from Aug. 2 to 4 and  launch at retail in January at Bergdorf Goodman, Saks Fifth Avenue, Neiman Marcus, Nordstrom and Giuseppe Zanotti stores, as well as select retailers worldwide. The range also includes two handbag styles and will retail from $795 to $1,995.

Zanotti has created his share of custom shoes for designers and celebrities including Selena Gomez, Janet Jackson and Kim Kardashian, but this marks the largest range and most involved partnership to date, and Lopez is his most multifaceted collaborator. The singer-actress-producer is currently on the Las Vegas stage with her “All I Have” show; the airwaves with her NBC drama “Shades of Blue,” and even at the multiplex as the voice of one of the “Ice Age: Collision Course” animated characters. Then there’s her retail empire, led by her 18-fragrance collection with Coty, which has generated estimated retail sales of $2 billion over its 14-year lifespan; fashion line for Kohl’s, and a jewelry collection for Endless.

“I’m very proud of the businesses I’ve built,” Lopez says. “They’ve allowed me to bring really great product at an accessible price point. But I hadn’t done a high-end project yet and this seemed like the right time, medium and designer. I’ve always been passionate about shoes. Sometimes I even choose an outfit around my shoes.”

Lopez and Zanotti met last May in Los Angeles to work on several custom styles, and soon decided to do a full-on collection. Zanotti visited her “museum wardrobe” and Lopez sent hundreds of inspiration photos in preparation for the meeting on this day, to which Zanotti brought several prototypes from Milan. Carefully arranged on Lopez’s coffee table are a pale blue suede platform sandal; a nude pointy-toe pump with a cutout upper and laces up the ankle; a beige cage bootie; a tall gladiator boot-sandal in pink snakeskin, and a pale pink studded high-top sneaker with a wedge heel. There are also stacks of leather, silk and suede swatches and heaps of Swarovski crystals, buckles and studs, but it’s clear that Zanotti already had the memo on Lopez’s favorite styles and colors.

“Oooh, I love this,” she says as she quickly kicks off her own shoe and fastens the ice blue sandal around her ankle. “I’d leave it simple like this…but it needs a little something, even if we just embellished this part right here,” she says, holding the buckle. “Some Swarovski’s maybe? Just something to spice it up a little bit.”

“The suede without crystal and the silk with crystal,” declares Zanotti.

Lopez moves onto the closed-toe lace-up heel, which she declares, “a little small, but it wouldn’t be the first time I squeezed my foot into a shoe.” Examining her foot, she says, “I feel like this part is too thick,” eyeing the vamp.

“Does anyone have any scissors?” asks Zanotti. And with that, he cuts part of it off.

Not holding back, Lopez hikes up her hem and extends her leg onto Zanotti’s chair so he could help her put on the strappy boots. These were too loose in the calf. “My legs are really skinny there…but some people have bigger legs,” she says. Zanotti adjusts the straps with adhesive tape and says, “We can put elastic. I adjust all the time. Everything in life is proportion.”

As the day wears on, Lopez is struck by more inspiration. She calls for several styles in rose gold, her favorite color, with tonal crystals, and an ice blue snakeskin colorway. “Because I feel like a bag in that blue, with that sandal, in that skin, would be amazing. In my mind I see myself walking down the street with this shoe and this great bag that matches. I feel like it’s a bag that moves and it’s not small.”

“I was not prepared to do bags, but it’s OK,” says Zanotti, quickly sketching some ideas. “I’d do a small bag, too, for evening.”

Later, he says, “She gives me suggestions and I give her advice and both of us, we are open to learn. Every time I work with a star I learn a lot. Also, I teach a lot because I’m a shoemaker, a designer. I’m born with a pencil in my hand. For old teenagers like me it’s good to learn.”

He adds that they share a newfound grown-up aesthetic, different from the overt glam that are trademarks of them both. “Now my vision in fashion is less spectacular than before. It’s like less fireworks and more cool, but in a good way forward. Less is more,” Zanotti says.

Lopez says, “Giuseppe is a designer I’m very loyal to because of his beautiful silhouettes and craftsmanship. It’s impossible not to feel like a more confident, sexier version of yourself when you’re wearing a pair of Zanottis. The shoes are so in line with my personal style, it felt easy and natural.”

Zanotti describes working with Lopez as such: “It’s the first time I’ve done a real collection for a celebrity. I used to do in the past one shoe, two shoes. In this case it’s not enough to describe her. She likes to dance, she likes to sing, to walk and go shopping, and she has kids. She’s a beautiful and normal woman. I need to create something not only for red carpet or couture but something for reality. We have probably 18 styles at the moment. It’s a small universe.”

While the shoes are set to debut in early 2017 — and for spring from the looks of the samples — Zanotti hedges at giving exact details and projections. “It’s passion, not rushed. It’s not a business. We don’t have targets. We have the idea to build a good relationship. She is a lovely friend.”

Lopez is also open-ended. “Given it’s the right timing, I’m absolutely interested in continuing this collaboration and working on similar ones. An opportunity to work with some of the most celebrated designers in the industry is something I likely wouldn’t want to pass up.”

When their session comes to a close, with Lopez excitedly snapping photos on her rose gold iPhone and Zanotti furiously sketching away, saying, “I don’t want to forget,” Lopez assures him, “I won’t forget. I remember everything. It’s a blessing and curse.”

Lopez then raises her voice a decibel and exclaims, “They’re not ready Giuseppe. They are not ready for all this!”