The new collection is tapping into a growing trend for comfortable and sporty — but still glamorous — footwear. 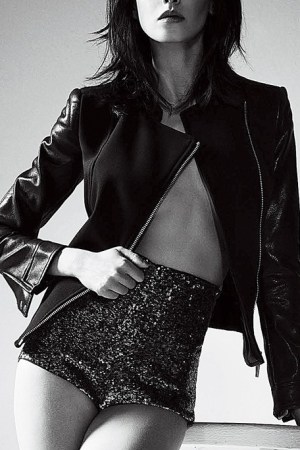 LONDON — The world just got flatter for Jimmy Choo.

The brand, which will show its fall collection in Milan on Saturday, is tapping into a growing trend for comfortable and sporty — but still glamorous — footwear with the launch of a collection called Choo.08°.

The collection, which takes its name from the longitudinal position of Choo’s design studio in London, features new styles as well as ones that are already part of the brand’s offer.

“This has been a hidden facet of Jimmy Choo that we wanted to bring out,” said creative director Sandra Choi. “The company is growing bigger and stronger, and the power of the brand is allowing us to do new things.”

Choi said the new collection has all of the Jimmy Choo DNA, aiming to meet the needs of busy, multitasking women. “Sometimes in fashion you don’t have to be teetering on heels. The word practical is so unsexy — but I’m allowed to use it now,” said Choi.

There are biker boots; slip-on skater shoes in matte black python or antique brushed gold leather; flat tuxedo pumps with a pointy toe; rocker boots with straps and snake details, and high-top trainers in a variety of finishes and materials, including sparkles and elasticated lacing.

Some of the styles — such as the tuxedo pump, high-top trainers and brogues — mirror those in Choo’s men’s wear offer.

Another part of Choo.08° features heels more substantial than the stiletto on which the brand built its business: They include an urban sandal with a closed toe and thick three-inch heel, and a lace-up shoe with a similar style and height of heel.

The company will launch a pop-up Choo.08 space inside Selfridges from April. The collection is priced similarly to Choo’s main line, and starts at 325 pounds, or $543 at current exchange, for the basic skater shoe.

Choi, a mother of two with a full-time job, said that her daily shoe lineup reflects the new and expanded Jimmy Choo offer.

Choi usually wears her python skater shoes or biker boots to take her eldest child to school — and may well stay in them for the rest of the day. “Our offices are 400 meters [1,315 feet] all the way around — and we’re over four floors,” she said. Depending on her appointments during the day, she’ll change into flats, or pumps or boots with a heel.

She said the new line is simply another facet of the overall Jimmy Choo offer, but it will not overtake the core collections in terms of sales. Choo’s largest business is Choo 24:7, which the company calls a “shoe wardrobe” that’s stocked with the brand’s classic styles. Choo also has a seasonal collection, as well as men’s and accessories.

The new collection isn’t the only project on Choo’s plate.

During the same interview, the firm’s chief executive officer Pierre Denis said the brand notched “high-double-digit growth” in 2013, despite currency headwinds, and he is expecting to see a similar rate of growth this year.

In December, Jimmy Choo relaunched its Web site as part of its vision to become an omnichannel operation, and later this year plans to unveil local-language transactional Web sites in Japan and China.

On the retail front, the brand opened a men’s store in Shanghai in December, and will open one on the luxury shopping street of Omotesando in Tokyo in March. In April, Choo will unveil its new shop concept, designed by David Collins Studio, in Beverly Hills, and it will reopen its Bond Street store in London in September.

In September, Choo will also launch its first men’s fragrance with Inter Parfums, and it is planning a major event during London Collections: Men in June.