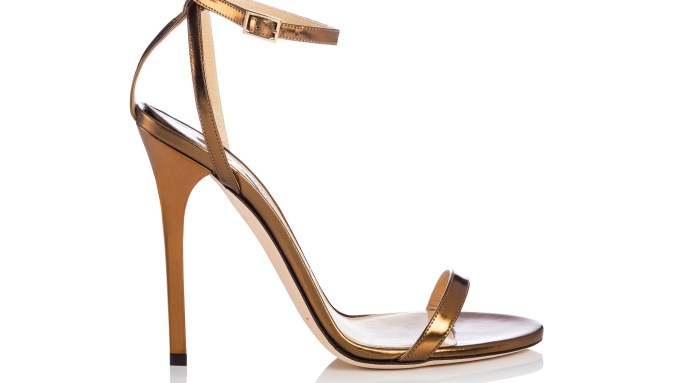 Of all the wizardry Sandra Choi has worked on the red carpet, one of her latest acts, a shoe she created for awards season last year, is perhaps the best — and most emblematic — of her career so far.

In the more than two decades she’s been at Jimmy Choo, Choi, whose title is creative director, has shod actresses including Cate Blanchett, Julianne Moore, Jennifer Aniston, Angelina Jolie, Halle Berry and Kate Winslet for their big awards nights.

She’s put them in pumps, peep-toes, platforms, strappy sandals, flat sandals — as worn by Uma Thurman at Cannes in 2011 — and even done made-to-order vegan-friendly shoes in satin, PVC and plastic for Natalie Portman.

She’s done red-carpet footwear for men — Leonardo DiCaprio and Mark Wahlberg among them — and for children. Abigail Breslin was 10 years old when she was nominated for best supporting actress at the 2007 Academy Awards for “Little Miss Sunshine.”

“She wanted to be pretty and dress like the other grown-up girls on the red carpet so we made her a strappy sandal with a kitten heel,” says Choi over a plate of grilled chicken and spinach at The Delaunay in London.

Yet it was only last year that Choi came up with a disappearing act, a sandal known as The Minny, so-called for its minimal architecture — a thin sole and a few strips of leather attached to a 115 mm (4 1/2-inch) heel.

“I wanted delicateness, and a shoe that could be played down to the point where it disappears,” says Choi.

“If you want to play it up, you can choose a different color to contrast your outfit — that was what I was thinking. If you wear it with a red gown, and then have it in nude satin or suede, it disappears.”

The design was a winner, with the likes of Dakota Johnson, Kate Mara, Charlize Theron, Diane Kruger, Gwyneth Paltrow, Selena Gomez, Bar Refaeli and others wearing them to the Golden Globes, various film premieres and after parties.

Choi is the niece of Choo, who is 67. She dropped out of fashion school to join his bespoke business in London’s East End, and has helped to build a red-carpet business on service, comfort and classic styles.

“The designs need to be graceful, elegant, timeless. The pictures stay with us for decades,” Choi notes, adding that she’s sensitive to celebrities’ needs on the red carpet: “They’re being themselves, they’re not playing a character or reading off a script. The red carpet is the one time they get to show off their own style.”

To mark 20 years in business, Jimmy Choo created a limited-edition capsule collection of 20 shoes and accessories inspired by the red carpet. It includes original designs as well as the most popular VIP styles including Lance, which has logged more distance on the red carpet than any other shoe, and Minny. Prices start at 495 pounds, or $710, and go into the thousands of pounds for special orders that are adorned with Swarovski crystals. The shows can be purchased individually, or by special order as a set packaged in a vanity shoe trunk.

Choi is also keenly aware of the intersection of heels and time, so she strives to make shoes that don’t reflect a particular year. This is especially true for the red carpet, which the brand has been ruling since 1999, when Jimmy Choo opened its first suite at L’Ermitage in Beverly Hills.

As hemlines and silhouettes shifted, so did Choo’s heel heights, which reached a crescendo in 2011, with a 145 mm (5.7 inches) slingback, peep-toe platform called Vita, one of the brand’s most popular red-carpet styles over the years.

Of late, heights have started to drop down to 115 mm, as in the strappy Lance — a longtime Aniston favorite — and the Minny.

Some 618 pairs of Jimmy Choo shoes have appeared on the red carpet during major awards ceremonies over the past 20 years, and that’s not counting the times that Michelle Obama, the Duchess of Cambridge and various other British royals have walked in them.

Choi, now a mother of two in her 40s, recalls the very early days of her career when Princess Diana would pull up outside the brand’s Motcomb Street store in London to place her order.

“She came to Jimmy Choo via her couture designers and asked Jimmy to make shoes to match,” recalls Choi. “She was always on the lookout for traffic wardens…little wonder when she would drive straight up to the door of our first shop…and park on the double-yellow lines outside.”

It didn’t take long for the brand — formerly owned and run by Tamara Mellon and her partners — to build on the star power that Diana imparted, and start working the Hollywood machine. It was a strategy that would lead to repeated sales of the company at ever-higher valuations, and eventually a public listing in 2014 on the London Stock Exchange.

Today, Choo has a market capitalization of 460 million pounds, or $666 million, and remains majority owned by the luxury group JAB.

Indeed, Choo was among the first luxury brands to realize the red carpet was the most potent catwalk in the world. Choi recalls the quick decision to take a suite dedicated to red-carpet dressing at L’Ermitage shortly after the brand’s Los Angeles boutique opened in 1999.

“The stylists were calling in the shoes, and even buying them and it caused chaos in a retail environment,” Choi recalls. “We thought, ‘We need to separate the whole thing. We already had the relationship with the stylists, and we wanted to be a part of it.”

At the time, Mellon — a marketeer to her core — made sure she accommodated the stars’ and stylists’ every need, hauling piles of white satin styles from London and dyeing or embellishing them to order.

The stylist Elizabeth Saltzman recalls those early days. “Jimmy Choo made the shoes accessible, and dyed them to match the dresses. At the time it was unique, and it was a luxury.”

Even today, says Saltzman, Jimmy Choo “understands comfort, the shoes have built-in platforms, you can walk in them, and every style has three heel heights. They are good for the customer.”

Choi is always thinking about the details: “All those little things need to be thought through. The buckles. Where you put a buckle? If you’re wearing a long gown, you might not want a buckle because it might catch the dress. You don’t want accidents.”

Choi’s approach to the red carpet and to the seasonal collections will never change. “If you can just make something beautiful that touches your eyes and your mind, that’s job done. I’m an artist — but one who makes things that you can actually wear.”