The fashion stylist and magazine editor will unveil her first collection for the Italian footwear and accessories brand in Milan later this month. 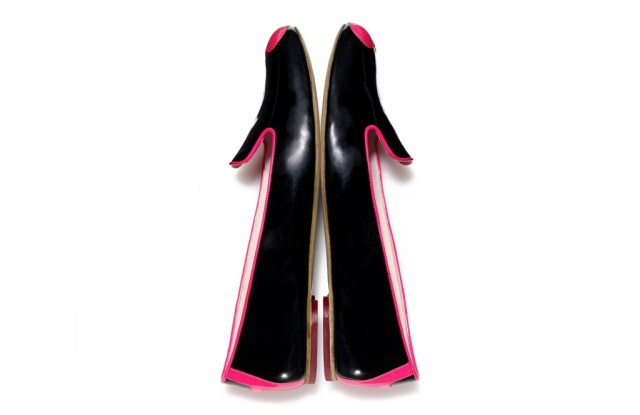 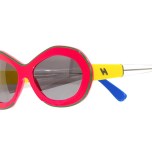 LONDON — The fashion stylist and magazine editor Katie Grand is stepping out of the backstage area and into the limelight with her first collection for the Italian footwear and accessories brand Hogan, which will be unveiled in Milan later this month.

The editor of Love magazine has designed a capsule collection that includes three footwear styles, two bags and a pair of sunglasses.

“The collection has the Hogan identity, but it’s more fashion, and I’ve added a bit of femininity,” said Grand. “Everyone loves Hogans, but quite often they can feel like boys’ shoes.”

Grand worked with two existing Hogan styles, and created one new one. There’s a high heel, a ballet pump and a sneaker. The exteriors are patent leather with suede and mesh details and napa interiors, while the color palette includes fluorescent pink, Lego blue, bright yellow, jade green, black and white.

She described the smaller of the two bags as big enough to carry essentials — including a BlackBerry, an iPhone, a credit card and a key — but small enough to sling around the wrist. The other bag is slightly bigger, can be worn across the body and goes from day to night.

The sunglasses have mirror lenses with fluorescent pink, yellow and blue frames.

“We are very excited about this new collaboration,” said Andrea Della Valle, president of Hogan and vice president of the Tod’s Group. “Katie’s talent and great energy are perfect for Hogan. We believe this new project to be in line with the international spirit of the brand and its easy-chic lifestyle.”

The collection, which will be presented on Sept. 19 during Milan Fashion Week, will hit Hogan stores and selected retailers in January. Grand photographed the ad campaign on 12 models, and the details of the campaign will be revealed at the Milan event.

This isn’t the first time Hogan has worked with outside talent: Karl Lagerfeld designs a capsule collection of footwear and outerwear for the brand.

Grand described her move into the world of product design as being “completely terrifying. I have to hold these designs up, and everything has to be right. And I’m not used to having the final sign-off. I am super nervous.”