The sneaker brand had originally printed handbooks in the Twenties.

The cover of the new "Keds Hand-Book for Women."

Keds has a long history of being a champion for women. And today, the brand will channel that history by launching an updated version of its “Hand-book for Girls,” which first made its appearance in the Twenties.

Now called the “Keds Hand-Book for Women,” the first edition of the book, which will be printed as well as distributed digitally, is centered around the theme of power in its many iterations.

Keds, which is now owned by Wolverine Worldwide, worked with more than 70 women on the handbook — from illustrators and photographers to videographers — which tells the stories of 28 women. They include Meena Harris, founder of the Phenomenal Woman Action Campaign, mental health expert Nina Westbrook, and Alana Mayo, who heads production and development at Michael B. Jordan’s production company, Outlier Society.

The publication of the handbook coincides with a relaunch of the brand under the direction of Keds president Gillian Meek.

Keds was founded in 1916 as a canvas-topped, rubber-soled, high-top lace-up shoe called the Champion. It was called a sneaker because the rubber sole allowed the wearer to sneak around soundlessly. Through the course of its history, Meek said, the brand has encouraged young women to get out and exert their independence, a revolutionary idea in the Twenties. 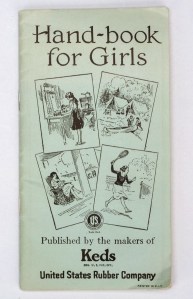 A vintage handbook for girls.

“For the last 12 months, we’ve engaged in a consumer research study,” Meek said, “checking in with [our customer] on what shoes she wears and the things that matter to her.” Although Keds has been making shoes for women for over a century, Meek said the company realized that it “needed to be more diverse and inclusive” to appeal to the women of today, who are multifaceted.

“So we landed on a platform: Made for Women — Whatever That Means. That’s our north star,” Meek said. “It gives us the opportunity to define and redefine what it means to be a woman.”

That led to the reinvention of the handbook.

“We modernized the handbook as a way to embrace our heritage in a new and fresh way — to make an emotional connection with our consumer that’s authentic to us and that speaks to her passions and beliefs in a way that empowers her to do her thing, and not to live by anyone else’s rules,” said Lisa Lewis, Keds’ vice president of marketing.

Meeks said the handbook was a “labor of love for the team,” which is “geeky about our history.” The current edition will live on through early June and Meek said it can be repeated seasonally.

Beyond the handbook, Keds has been working to make the brand more relevant through collaborations — partnerships with Taylor Swift, Opening Ceremony, Colette, Kate Spade New York, Major League Baseball and others are examples — as well as by enhancing its digital footprint. The company is also growing its presence outside the U.S.

“We’re known for a certain style but we’re building silhouettes and styles to enhance that,” she said, pointing to colorful sneaker-boots that were introduced last fall.

And the results are showing on the bottom line. Although Wolverine doesn’t break out sales for Keds or its other brands, in the fourth quarter of last year, the corporation did report that Keds delivered low-single-digit sales growth. The brand — while not as large as Merrell, Sperry and Saucony, the three key drivers to Wolverine’s business — is nonetheless considered to be in the top tier of the company because of its strong digital presence.

Meek said Keds appeals to a wide range of ages, but its target is a 24- to 32-year-old female. “We’ve chosen to be in that space,” she said. “Our message resonates best there.”

The handbook will hopefully also resonate with that customer.

An abbreviated version featuring 18 women will be mailed to Keds customers, distributed to press and influencers, given out at events in Los Angeles, London, and Mexico, and will be available at women-owned businesses and cultural institutions in key markets. All 28 women will be featured on the Keds.com web site and other social channels.