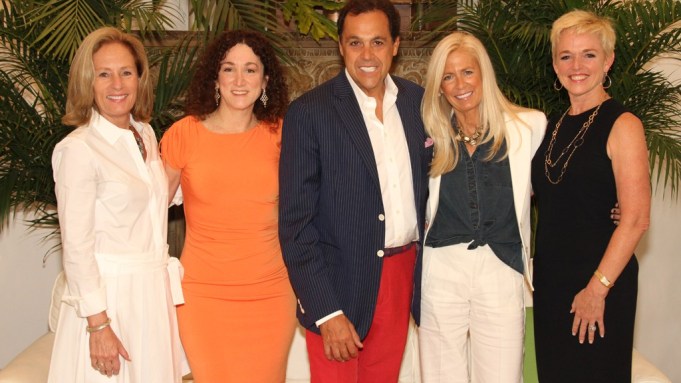 Brown Shoe has signed a licensing agreement with Kellwood Co. to manufacture and market women’s, juniors and girls’ apparel under the Sam Edelman label. The first contemporary women’s collection will be introduced to stores in February for fall 2014 selling. It will be available at department and specialty stores where Edelman’s footwear is sold, as well as Sam Edelman retail stores and samedelman.com.

“Apparel is the cornerstone of our expanding lifestyle presentation. The goal has always been to dress the ‘Sam Girl’ head-to-toe in my designs, and now it’s a reality,” said Sam Edelman, founder and division president of Sam Edelman Shoes. The footwear brand was founded in 2004. After taking a minority interest in 2007, Brown Shoe bought the remaining 50 percent interest in Edelman Shoe in 2010 for $39.6 million. The brand, which has been on a fast track, is known for its trendy, stylish footwear at accessible price points.

The contemporary collection will consist of fashion-forward tops, sweaters, bottoms, dresses and jackets, with a similar aesthetic to Edelman’s footwear. Edelman and his wife, Libby, have a 30-year history in footwear, becoming well known in the late Eighties and early Nineties for their Sam & Libby footwear line, particularly the bow-toed ballet flat. However, by the mid-Nineties, their footwear sales fizzled and they took a break. After spending time as a horse breeder, trainer and equestrian, and then following a horseback-riding accident, Sam Edelman decided to return to the fashion industry with his own brand. (Sam & Libby footwear was launched as an exclusive at Target this past spring).

According to Libby Edelman, his wife and muse, the Sam Edelman fashion customer is a woman between 19 and 29 (“who can be older or younger”). “She’s a girl who’s very aspirational, living on Instagram, Facebook and tweeting and likes to share what she’s finding. She knows what’s out there. We’re going to give her great fashion looks and items that speak to those aspirational ideas,” she said.

Footwear mavens such as Vince Camuto, Tory Burch and Kenneth Cole have gotten into the apparel game with varying degrees of success. Sam Edelman had a sportswear collection for two seasons under the Sam & Libby label in 1988 and 1989 that got off to a strong start, but quickly faded “because we took our eye off the ball,” said Sam Edelman. “We’re great at ideas, but we needed the partners with the expertise and the professionalism. What we have in footwear, they [Kellwood] have in apparel,” he said.

Diane Sullivan, president and ceo of Brown Shoe, which had sales of $2.59 billion in 2012, noted that the company already has a strong partnership with Kellwood with its Vince footwear collection. Brown and Kellwood are also both St. Louis-based firms.

In addition to its growing wholesale footwear business — Sam Edelman footwear is available at 2,000 points of distribution — Edelman looks to expand through licensed categories and freestanding stores. The brand has licensing agreements for outerwear and jewelry, and is close to signing a new handbag deal. Edelman’s wish list includes beauty and fragrance, lingerie and home categories. The company opened a flagship on Spring Street here in October (right before Hurricane Sandy), which has been exceeding expectations, said Sam Edelman. It also has a store in East Hampton and has secured space on Greenwich Avenue in Greenwich, Conn., as well as North Beverly Boulevard in Los Angeles, where it will open a shop next spring. Eventually the stores will be redesigned to showcase apparel. “Brown Shoe is capable of opening as many Sam Edelman stores as needed,” said Edelman.

Granoff said what attracted Kellwood to the Edelman brand is that “Sam and Libby have a pulse on fashion and an in-depth knowledge of that Millennial customer. We saw it as an opportunity to evolve into a lifestyle brand,” she said. She noted that the sportswear collection will be positioned for the young contemporary zone, near such resources as Free People, Ella Moss and Splendid. Like the footwear, the collection will be distinguished by its fashion-forward styles, mix of fabrics, ornamentation and silhouette-enhancing looks. The sweet spot for the collection will be between $100 and $200 at retail. Granoff declined to give first-year sales projections.

A separate showroom will be dedicated to the Edelman apparel business. Caren Belair, group president, will be hiring a brand president reporting to her to run the Sam Edelman business day to day. Edelman added that they will launch e-commerce for footwear in October, and the apparel will be aggressively marketed via social media. The company launched an ad campaign this spring to raise its profile, featuring model Kate Upton.

The contemporary sportswear will initially launch in the U.S., but global distribution will soon follow.

“We see an incredible opportunity to build the Sam Edelman apparel business for the woman who knows and loves Sam Edelman shoes. We will utilize Kellwood’s core strengths and expertise to produce and distribute Sam Edelman apparel worldwide,” said Shanahan, who noted the line will be produced overseas. Juniors and girls’ wear will eventually follow, but no firm date is set.

Besides Vince and Edelman, Brown Shoe — which has more than 1,000 specialty stores and does 60 percent of its business in retail — manufactures such brands as Via Spiga, Franco Sarto, Carlos Santana and Fergie Footwear. Kellwood’s brands include Vince, Rebecca Taylor, David Meister, XOXO, My Michelle and Sag Harbor.