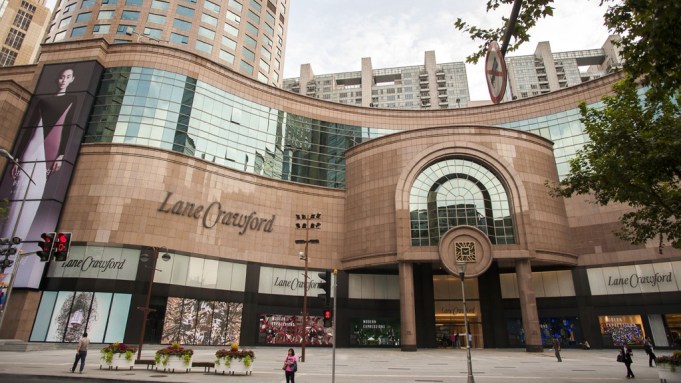 SHANGHAI — Lane Crawford on Thursday will open its largest store to date, in Shanghai.

The Hong Kong-based retailer’s Shanghai flagship weighs in at 150,000 square feet and is a major step in Lane Crawford’s plans for omnichannel success in China.

Speaking with WWD ahead of the opening, Andrew Keith, president of Lane Crawford and Joyce Boutique, was positive about the brand’s reentry into Shanghai. A franchised Lane Crawford store previously operated in the city, before closing in 2006.

“I think the fundamental lesson that we learnt [from the experience] was more about our brand and the management of our brand than it was about China. That is, to be successful as Lane Crawford in China, we needed to have control,” Keith said.

“China takes a lot of time, patience and flexibility, you’ve got to have a very close understanding of the market and close connection with your customer, you’ve got to be able to understand the nuances of how business works here and to do that you have to be on the ground, you have to invest directly and build the capability,” he added.

Lane Crawford isn’t the only luxury multibrand retailer that has decided 2013 is the right time to make some significant moves in the Mainland China market. Last month, 10 Corso Como opened its doors in Shanghai and Galeries Lafayette is returning to Beijing after a 15-year hiatus.

Although careful not to speculate about the motives of other retailers, Keith said that, for Lane Crawford, it’s obvious that Chinese consumers are more evolved than they were even a few years ago, a plus for luxury multibrand retailers.

“I think you’ve got an increasing sophistication in the market and that’s a consequence of people traveling more, being able to access more brands online and generally discovering fashion. So I think the appetite for multibrand has grown,” he said.

According to Keith, “connected commerce” is the name of Lane Crawford’s game in the Chinese market, with strategically-placed flagships giving consumers a taste of the luxury retailer’s product offerings and service, and then giving them the confidence to purchase those products online as well.

In a country where fake luxury goods are ubiquitous, consumer perception of an online retailer’s legitimacy is particularly important.

“We were the first multibrand, full-price omnichannel retailer in this market, our positioning has always being about our product and our service, we are not using price as part of our online strategy and the trust element is very important,” Keith told WWD.

He estimates that almost 100 percent of the retailer’s product offering will be available online within the next three months, and identifies online and the Mainland China market more generally as two key drivers in Lane Crawford’s “double-digit” growth this year. He declined to give sales projection for the new store, saying Lane Crawford is in it for the long haul and isn’t going to set any goals or have specific targets. The company’s revenues topped $700 million last year.

The next move in terms of physical expansion for Lane Crawford is a 100,000-square-foot store in the heart of Chengdu, a city of 14 million people in China’s west.

“We’re excited by the possibility of Chengdu because it’s the fastest-growing economy in China, has a relatively young demographic, they have a relatively high disposable income and it’s a city that’s seeing a lot of investment, both from retail and business, but also from government because it’s strategically very important,” Keith said.

“We also see it as strategically a very important part of our network in China because we are building our strategy based on a connected commerce strategy, connecting our online business with our physical store business, and obviously in a country as physically huge as China, we’re not in a position to open stores in every major city, but what we can do is position ourselves with great, anchor, flagship positions, then from there build our e-commerce business from that.”

In terms of marketing to Chinese consumers, brand heritage is often touted as a plus, and with 160 years in Greater China, Lane Crawford is well-known to Chinese shoppers flocking to Hong Kong to spend their new-found yuan. It’s this long-term relationship the retailer is hoping to leverage as it expands its reach into the Mainland.

“We are really building a connected commerce, luxury lifestyle retailer that is about taking retail in China to the next level. We feel as though we are in a great position to do that, our knowledge of the market and our loyal customer base means we’re in a prime position to do that,” Keith said.