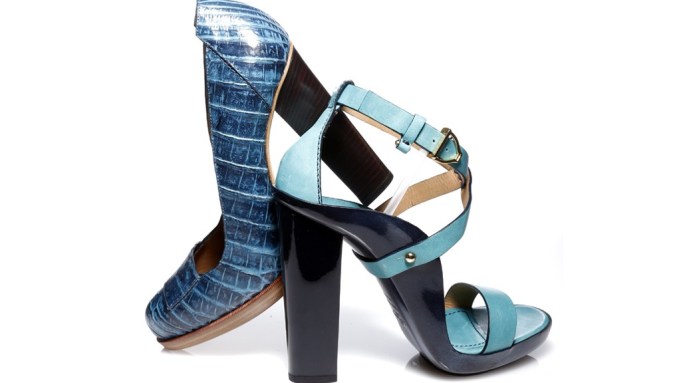 Lucchese, the maker of high-end cowboy boots, is looking beyond the Wild West.

For spring, the El Paso, Tex.-based company is launching fashion footwear for women and men, the first of several moves that capitalize on Lucchese’s luxury appeal to create a lifestyle brand.

“Lucchese has a 130-year history,” noted William Zeitz, executive vice president of marketing and creative director, and a former senior executive at Cole Haan and Nike. “Sam Lucchese immigrated from Italy to Texas, back when it was still truly the Wild West. He started making boots for cowboys and word spread throughout the territory that he was making the best riding boots.”

The artisanal details the brand is known for provide the foundation for the new collection of shoes, including stacked heel pumps, flat sandals and riding boots, often in ultraluxe exotic skins. The new additions range in suggested retail price from $495 for a suede driving shoe to $4,800 for a loafer made from fine center cut Nile crocodile belly skin. Among the highlights is a $725 pump style with a Western-motif leather overlay.

“Because of the mantle of American luxury, we see our designs as being somewhat more casual and related to the American lifestyle and how people are dressing today,” Zeitz added.

“Lucchese has these avid fans, loyal people who collect and have 20 pairs of cowboy boots in their closet,” Zeitz noted. “They have been asking us to offer them Lucchese even when they’re not wearing a boot. In that sense, we are growing our share in the closet by offering new silhouettes. The big opportunity is to increase brand awareness and attract more people to the brand that haven’t really known Lucchese before.”

The push to expand Lucchese’s offering was fueled by majority owner John Muse, a Dallas venture capitalist. The brand’s current sales volume is at $70 million, including wholesale, as well as freestanding stores in Santa Fe, N.M., San Antonio and Nashville. Zeitz declined to disclose sales projections.

The new styles will launch at the FFANY New York Shoe Expo, which kicks off today and runs through Wednesday. “We think that by increasing the fashion side of the brand, it will also help the Western side of the brand,” Zeitz said. Such synergy will also play a central role in future projects. “We started working on handbags and other accessories and will be launching those within a year.”