Pīferi is set to make its debut at Harrods in London, where it will be sold exclusively for the next month.

Luxury label Pīferi will make its big debut on Friday at Harrods in London, where it will be sold exclusively for the next month. A pop-up will get prime placement with a rotunda at the center of Harrods’ Shoe Heaven.

“For me, Pīferi was the launch that stood out this year,” said Alberto Oliveros, Kurt Geiger’s general merchandise manager, who oversees the Harrods business. “I love that it’s a vegan collection. Sustainability is becoming more important and relevant for every single customer. But I also love that the shoes are super feminine, dreamy and unique.”

The rising talent behind the made-in-Italy brand is Alfredo Pīferi, who was most recently head of design at Jimmy Choo, and also built his résumé with gigs at Burberry and Kanye West.

“He’s a shoemaker — he has knowledge of the last and how the product is made. The shoes are fabulous, but at the same time comfortable,” Oliveros noted.

While the designer planned to launch the Harrods project in May, it was shelved when the pandemic took hold.

While the brick-and-mortar retail climate still isn’t back to normal — new coronavirus restrictions will take effect this weekend in London — the designer is excited to make a statement with the pop-up. It will be decked out with the light pink accents that define the collection.

“In a moment of crisis, people are required to have more courage. I appreciate the courage of retailers,” Pīferi said. “It doesn’t get better than Harrods.” 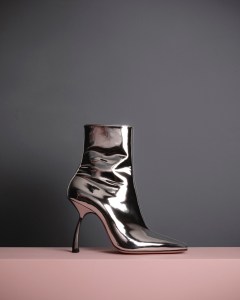 Oliveros cited distinct details, like the silhouette of the curved heel, that help get consumers’ attention. Pīferi’s socquette, a detachable anklet made of durable recycled nylon and upcycled Lurex, is another highlight that Oliveros likened to an “Alaïa dress for your feet.”

The executive noted that newness and innovation are key to navigating tough times.

Harrods plans to support the launch on multiple fronts. Pīferi will participate in a training with store staff and shoppers can see the styles through private in-store appointments and virtual viewings. The collection will also be promoted online as digital sales continue to accelerate — and social media will play a key role, too.

For Pīferi, the Harrods project is the beginning of a retail rollout. In mid-November, the label will launch in Browns in London, Level in Dubai and with Pedder Group in five China locations. Pīferi also will also unveil his own web site next month.

The emerging brand’s sharp price points could be another distinct advantage as it competes with more established luxury players.

The collection retails from $465 for a flat to $1,095 over-the-knee boot. In addition, Pīferi added a mule and flat ballerina with mesh detailing.

As the designer charts his future, he understands that the challenge will be making all the parts of the business work together, starting with the sustainable elements.

“I arrived at a factory [in Parabiago, Italy] that used to produce leather shoes forever,” he said. “And when it comes to glue, you realize there is animal everywhere. So we had to find alternatives.”

Another challenge? Making his designs as inclusive as possible. Pīferi plans to extend sizes up to 45.