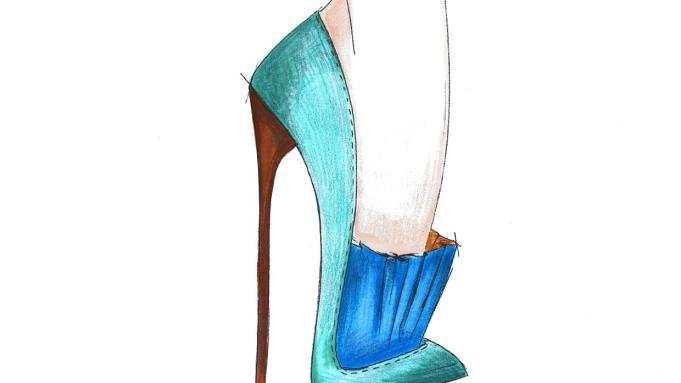 LONDON — Bound by a similar aesthetic — and an unapologetically practical streak — the founders of the British brand Malone Souliers have forged a footwear partnership with Adam Lippes.

Their first effort, a collection of five styles in 14 painterly color combinations — like something from the palette of Pablo Picasso or Andy Warhol — will debut on Saturday at Lippes’ fall show in New York.

The partners told WWD the collection is not a one-off collaboration, but rather a long-term proposition. Malone Souliers x Adam Lippes will have its own label, which marries the branding of the two companies, and it will be sold by both brands.

“Adam designs for real women — which takes a lot of guts, and my feeling is the same about shoes. I want people to be able to live their lives in these shoes,” said Mary Alice Malone, the creative director and cofounder of Malone Souliers.

She stressed that the collaboration was 50-50, and that the aim was to create a collection that could complement Lippes’ dresses rather than round off the runway silhouettes.

“These are not ‘show shoes.’ The project is about developing a line of shoes for Adam Lippes and we see it as a long-term opportunity. This is a business relationship that will help Adam Lippes diversify. It’s not just a shoe line for a ready-to-wear brand,” said Roy Luwolt, cofounder and managing director of Malone Souliers.

Lippes said this marks the first time that he’ll be able to show shoes and sell them. He said the idea behind the collection was to put a twist on the craftsmanship common to both brands and inject color into the mix. “Malone Souliers are brilliant colorists,” he said.

Everything is made in Italy, and Lippes said the size of the collection will grow each season.

Lippes and Malone, a former 3-D artist and furniture designer, worked closely on the footwear, which is meant to elongate and flatter the foot, with materials such as metallic leather, fine stretch napa and suede. “He was game to play with color and I’ll be happy if the designs look like ours — and his — as well,” Malone said.

Styles include a high court shoe with a pleat detail at the front, in turquoise, cobalt, and brown heel, or red suede with a sparkly blue heel.

There is also an over-the-knee shoe boot with a low heel and a big buckle across the front. That comes in gray, sparkly blue and brown or black and magenta. Another version comes with a high court shoe, adorned with an antique brass buckle and a contrasting heel.

There are lacquered wedges with ankle straps, one in an electrifying combination of aqua, pink and brown.

The collection will be sold as a capsule within Malone Souliers’ core collection and Lippes will sell it alongside his rtw in his New York showroom.

Luwolt said the brands had much common ground, with about 90 percent of their wholesale stockists overlapping. The average retail price for the collection is 550 pounds, or $800.

Malone and Luwolt launched Malone Souliers in February 2014 and today the brand sells at stores including Bergdorf Goodman, Saks Fifth Avenue, Nordstrom, Le Bon Marché, Galeries Lafayette and Matchesfashion.com.  They have collaborated with other brands in the past, including David Koma and Novis.

Lippes launched his own collection in 2004 after having served as creative director of Oscar de la Renta. His label is sold at retailers including Net-a-porter, Browns, Matchesfashion.com, Bergdorf Goodman, Saks Fifth Avenue, Harvey Nichols, Joseph, and Selfridges.