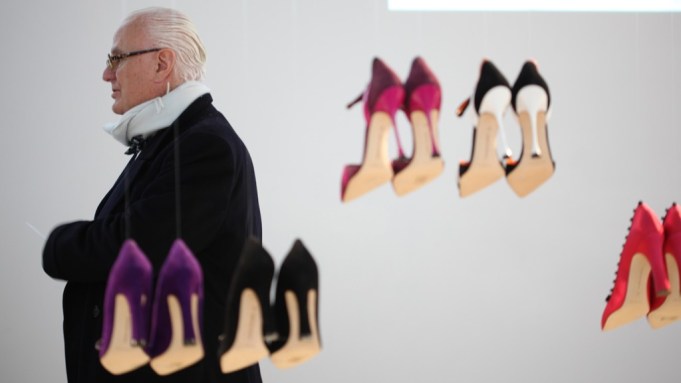 “Get up and put on your Timberlands or L.L. Beans.”

That was the advice dispensed from none other than stiletto king Manolo Blahnik, when queried about what women should wear to navigate the treacherous winter streets of New York. “Don’t wear satin,” he quipped.

Blahnik’s first New York Fashion Week presentation at the Paul Kasmin Gallery Sunday featured not only his fall collection but a quartet of short films directed by Michael Roberts, marking the second time the duo has worked together.

The collection and the films each displayed Blahnik’s various influences and favorite themes.

“The Boy Who Made Shoes for Lizards” was an homage to the cobbler’s early days growing up on the Canary Islands, and identifies the designer’s love of nature.

“Walk With Me: A Victorian Ghost Story,” which featured Amanda Harlech and Lucy Birley as sisters who become spinsters after losing love — or never having it at all — explores another favorite theme.

Literally mimicking the film theme, a group of colorful suede and leather booties with buttons up the side and spat-covered boots were modern versions of period’s footwear.

The film “Inspirations” recalled some of the most historic places in Spain, as well as the paintings of European artists Goya, Boldini and Tissot, which are popular references for the designer.

Shoes with gold braiding and trims harkened back to the luscious displays of clothes and shoes — worn on Sundays or special occasions — laid out in Spanish villages like Salamanca and Toledo.

The fourth film depicted Blahnik at work in his atelier. Ottoman silk, like that found in “the bedroom of Phillip II,” according to Blahnik, became what the designer dubbed his “favorite shoe,” which was a green and burgundy pump with a tasseled curtain across the top of the foot.

Paying further homage to Spanish culture was a pump with black pom-pom trim, and an embellished pump with red, hot pink and pale pink tassels.

Hopefully, Manolo’s New York ladies will have a chance to shed their snow boots and slip into a pair come September.