The designer's first official appearance at Saks Fifth Avenue brought in a crowd of eager shoppers. 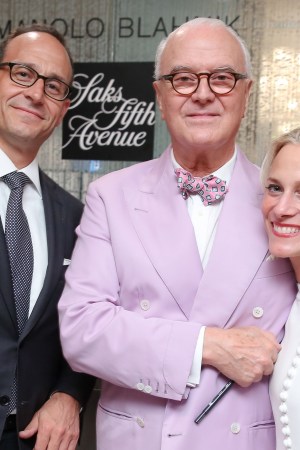 Dressed in a pastel lilac double-breasted suit, with poppy-red suede shoes and white cloth gloves to protect his hands from stray Sharpie strokes — Blahnik’s  appearance was not lost on the predominantly female crowd who eagerly stood in line to meet a man that they described as a “true icon.”

Blahnik was there to mark his new shops-in-shop at Saks’ 10022 shoe floor — his first partnership with the retailer’s flagship.

“Before I didn’t have enough production to be doing the shops, but now I’m starting to get a little bit more organized,” Blahnik said of his expanded New York presence.

His crowd of fans, who queued a line that traced the entire circumference of the 10022 shoe floor’s back room, were required to make a Manolo purchase in order to meet the maker.

A majority of their shoe purchases were of Blahnik’s cobalt silk “Hangisi” style, with which Christopher Noth’s Mr. Big character famously proposed to Sarah Jessica Parker’s Carrie Bradshaw in the 2008 “Sex and the City” film.

Rose, a student at Fordham University was already wearing her Hangisis and said of the style: “I have been dreaming of these shoes actually for like, 10 years, ever since “Sex and the City.” I just was like, it’s a once-in-a-lifetime opportunity to have him sign it.”

Maria, a New York-based finance professional said that she decided to finally pull the trigger on the shoes that she’s wanted “ever since the movie,” because, “they are going to be signed by him and I think that adds extra emotional value.”

Nearby, Viktoria Novak, a fashion designer, was also waiting for Blahnik’s pen to grace the sole of her Hangisis. She had run over to Saks after presenting her newest ready-to-wear collection. “It’s always been a dream to meet him…I had to be here, I literally just ran away from my show and ran over here.” Novak said she had not planned what she would say to Blahnik upon meeting him, because “I don’t want it to be too rehearsed.”

She felt that purchasing the $965 Hangisis was a no-brainer. “This shoe is a classic, I just think that every single woman in the whole world needs this shoe in their life. It’s an icon, you can’t live without this shoe. It’s just like a Chanel bag.”

A Saks 10022 salesperson told WWD that the Hangisi style has been so popular among Saks shoppers that more than 50 percent of its stock has sold out. Manolo Blahnik chief executive officer George Malkemus said that a backup order of the shoe is about to be shipped to the flagship.

“That is our number-one selling shoe every week throughout probably the world, whether it’s Asia, Europe, the U.K. or America,” Malkemus said.

He added: “’Sex and the City’ was about four women who came to New York to conquer the world, to find their hearts, to find their fashion, and they found Manolo Blahnik — and so thank God for that.”