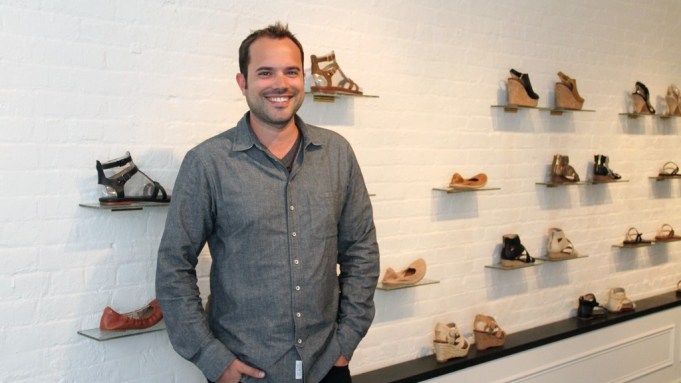 The accessories designer, best known for handmade women’s gladiator sandals, is opening his first store in New York’s TriBeCa neighborhood on Monday. The news follows a flurry of expansion efforts, including a larger fall handbag offering, a new leather-based jewelry collection and a men’s line of smoking-style shoes for fall.

Founded in 2005, Bernson’s label is also rolling out a five-piece collection of caged boots, mary janes and suede fringe booties that it created with Dannijo for fall. While the collaboration will retail for between $238 and $370, Bernson’s core offering of sandals, boots and flats ranges from $125 to $325.

“The idea was to make the highest-quality product possible but to keep the prices accessible,” Bernson told WWD from his new store on 20 Harrison St. “The focus is on doing things well. It’s never to do things bigger, bigger, bigger. It’s a focus on how well we can do it.”

That approach has paid dividends, according to the designer, who said that revenues were up more than 90 percent in 2010, and in 2011, they grew 110 percent year over year. Since the recession, the brand has only grown, and has been profitable for the past three-and-a-half years. He declined to reveal total revenues.

With the bulk of his business coming from online, specialty stores and select department stores like Bergdorf Goodman, Bernson is now embarking on a new frontier with his 2,200-square-foot boutique. From the light fixtures to the furniture, all elements of the store, which overlooks the brand’s showroom, were selected or designed by Bernson to reflect the brand’s aesthetic of urban elegance and rustic ease.

“The goal is to open multiple stores in the next three to five years,” he said, pinpointing markets in Los Angeles, Chicago, Florida and Texas. “But first we want to test this store and see what works.”