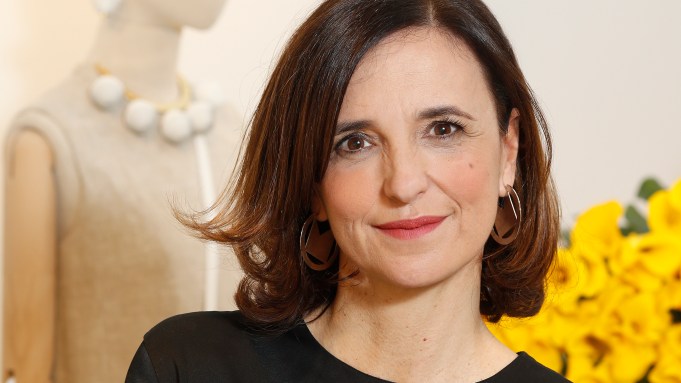 NEW YORK — Mercedes Castillo is ready to step into the limelight.

“It’s very tight, very special and very elevated. It’s sculptural, polished, clean and very feminine. That’s what we stand for,” said the Madrid-born Castillo, in an interview Monday morning at Camuto’s offices at 1370 Avenue of the Americas, before presenting to Nordstrom that afternoon.

“The brand is very much inspired by architecture and midcentury design,” said the designer.

Architecture plays a prominent role in her designs, which are characterized by modern sculptural shapes and proportions, bold colors and ornamentation. Born and educated in Spain, Castillo holds a degree in fashion design from Institución Artística de Enseñanza in Madrid. She earned her master’s degree in fashion design from the Domus Academy in Milan. Prior to studying fashion design, she studied law and earned her bachelor’s degree from CEU San Pablo University in Madrid.

Starting out at Gianfranco Ferré in Milan as the designer of women’s and men’s shoes, small leather goods and men’s leatherwear, Castillo then moved to Donna Karan Collection and DKNY for 10 years, where she designed footwear. Ten years ago, she joined Tory Burch, where she launched the designer’s footwear collection in a development partnership with Camuto Group, and designed her accessories. Her work on the brand’s shoes and accessories collections earned Tory Burch the ACE Award for Accessories Brand Launch of the Year in 2007 and the Accessory Designer of the Year Award in 2008. She has also served as creative director of contemporary brands at Camuto Group. Castillo, who had offices at both Camuto and Burch, left Burch last August.

“Mercedes and I worked together for many years, she is an incredibly talented designer; I am happy about her new venture and know that it will be a great success,” said Burch.

In developing her own collection, Castillo said she wanted to design something “current and relevant” and just didn’t want to come up with another brand in the market. Her goal was to create one that reflected how people really dress today.

“Art has very much become everyday life for everybody. Art and architecture are everybody’s passion today,” she said.

The collection is designed to appeal to all age groups and across a variety of styles. The footwear collection, for instance, runs the gamut from casual sneakers to sexy, high-heeled dressy sandals.

“We like the idea of having a collection that has depth and is very relevant. There is a thread between everything we’re working on, and there’s a point of view,” she said.

Ready-to-wear will launch as a capsule and will be available on an e-commerce site that launches in February. The offering includes wide pants; tops with exaggerated sleeves; dresses, and a sleeveless top with a peplum, in such fabrics as washed linen with leather detail, double-faced cotton, silk and silk faille.

The jewelry, which is bold and architectural, follows the same geometric forms that are evident in the footwear and handbags. The jewelry selection includes statement cocktail rings, big cuffs, simple bangles and leather pom-pom earrings.

“We didn’t want to compromise on quality,” said Castillo. Footwear is manufactured in Brazil and Spain, the handbags are manufactured in Italy, the rtw is produced in New York and the jewelry in Brazil. Castillo said she is sourcing the collection in some of Camuto’s factories and because of the elevated quality, is adding new ones.

“We’re going to create some [rtw] looks that set a tone for the overall brand, hoping to develop it more as times goes on,” she said. The rtw will eventually hang near such resources as Isabel Marant, Alexander Wang and Suno. Footwear, jewelry, handbags and rtw will each be targeted to different departments in department stores. The brand is not logo driven at all, and has a subtle Mercedes Castillo name on the handbags and on the inside sole of the footwear.

Castillo said she had been thinking about designing her own line for a number of years, and that the late Vince Camuto, founder of the company, had a vision for her to do that.

While Castillo described Burch’s aesthetic as “easy for me to understand and beautiful,” she said, “this definitely is closer to my heart. I feel more represented personally.”

The addition of the Mercedes Castillo brand allows Camuto to expand its portfolio into a whole new territory, creating a new halo for the company.

“We think it’s different than everything out there and we’re hoping retailers will agree with us,” said Alex Del Cielo, chief executive officer of Camuto Group, who declined to give a first-year projection. “We’ll see how it goes.”