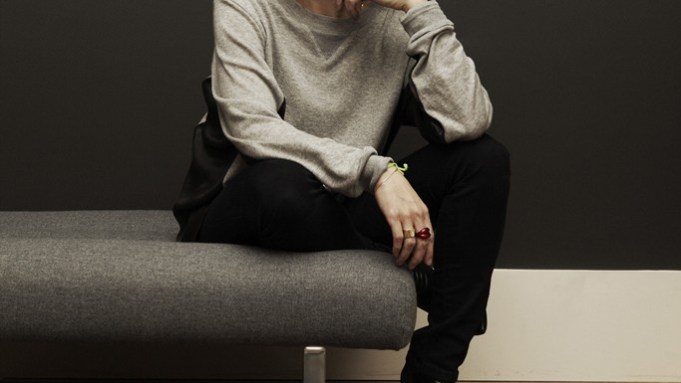 LONDON — Sandra Choi and Pierre Denis are poised to write a new chapter in the story of Jimmy Choo.

In their first joint interview, creative director Choi and Denis, the brand’s newly appointed chief executive officer, outlined some of their plans for the brand, including collections with a broader appeal, a new shop fit and steady penetration into the Chinese market, where Jimmy Choo has only begun to plant its flag.

Choi will show her first full collection as sole creative director in Milan on Saturday. She began her career interning for her uncle, Jimmy Choo, in his bespoke shoe business and was named creative director when the current company was established in 1996. After that firm’s cofounder Tamara Mellon quit in 2011, Choi was named co-creative director with Simon Holloway, who left earlier this month.

Choi said her goal is to make the brand, a division of the privately held Labelux Group, “more relevant, more current, more today. Put it back into the limelight. I want this brand to have power and strength.”

One of her aims, she said, is to show the different sides of the Choo woman: “Jimmy Choo is not just about a high-heeled, slinky party number; there is another side. We do biker boots and smoking slippers — for men and women — really well. There’s room for [Choo] 24:7, the fashion collections and the edgier, tougher styles.”

The Choo 24:7 collection is the company’s line of day and night wardrobe staples.

For fall, Choi said she was inspired by Helmut Newton’s photography, and especially his powerful images of women. The collection is filled with boots and military references. There is also a nod to Newton’s leg-loving lens with straps, cuffs and corsages around the ankles of shoes.

Denis, who joined the company seven months ago having most recently served as managing director for John Galliano SA, said putting Choi in the spotlight was a key decision.

“Sandra has been breathing Jimmy Choo since the beginning, and she fully understands the DNA of the company. She has been the creative force driving Jimmy Choo for a very long time,” he said.

He explained that the two are working together on a new shop fit — partly to accommodate the new, larger stores that will stock men’s and women’s styles — and are “rethinking” the look of the ad campaign and overall brand imagery.

In terms of retail, Denis said he is looking to open four to five shops a year in first- and second-tier Chinese cities, with a goal of having about 25 in the region. Choo already has shops in Shanghai, Beijing, Tianjin and Nanjing. The Chinese shops, which will stock the men’s and women’s collections, will be 1,620 to 2,160 square feet.

The brand will also be opening a men’s flagship on Dover Street in London in April. The 1,200-square-foot store will span two floors and house a complete assortment of Jimmy Choo men’s shoes and accessories, including bags, belts, scarves and small leather goods.

Denis said that while women’s shoes is the largest product category in terms of sales, men’s offered the biggest opportunity and was growing fast.

Growth — overall sales were up 17 percent year-on-year in 2012 — is coming from a variety of regions, including Europe, he said. France, Germany and the U.K. have been particularly strong, with Eastern Europe the next new frontier. A store is set to open in Prague in March. Jimmy Choo’s online shop remains its biggest retail outlet.

The U.S. is Choo’s number-one market, with about 30 stores and a network of wholesale accounts including Saks Fifth Avenue, Neiman Marcus and Nordstrom. The company recently opened a unit in Nashville.

Choi said, looking forward, a new handbag line will launch in 2014, and more collaborations —such as the one with Rob Pruitt for the 2013 cruise collection —are in the works.