The footwear designer worked with longtime collaborator Robert Storey on the new design. 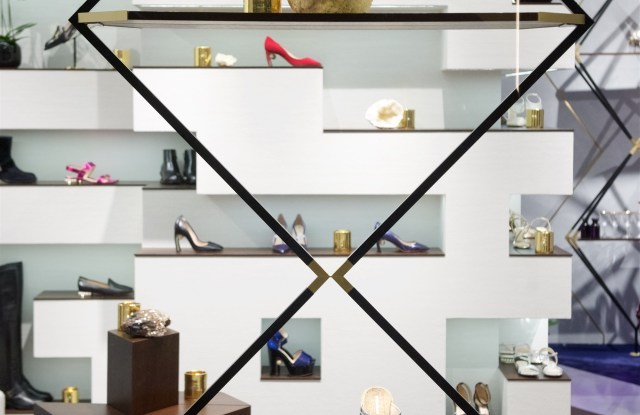 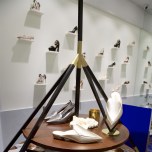 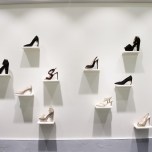 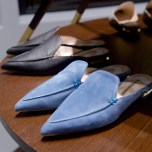 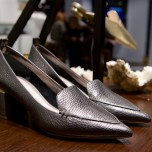 LONDON — Five years after the opening of his London flagship on Mount Street, British footwear designer Nicholas Kirkwood knew the time had come to give the space a facelift.

Kirkwood teamed with his longtime collaborator Robert Storey to redesign the store using brand signatures, such as geometric patterns.

Among the standout features in the revamped space is the floor, which is done in navy carpeting, white Italian marble and wenge wood. It is laid out in a Hungarian stitch pattern to form chevrons.

“We incorporated a lot of elements that we use in the shoes. We translated the gold elements in the brass trims and we brought in the chevron, in the pattern of the wenge wood floor. Wenge wood was a key element in my second collection. I used it to create all the heels and have loved it ever since. It has a textured element and a darkness to it, so I wanted to bring it back,” Kirkwood said. “The space still has a cinematic quality to it, that’s very much an element of the brand, but it feels warmer and more inviting now.”

Signature styles, such as loafers and boots with pearl-encrusted heels, are displayed on the windows in three-dimensional installations hanging from the wall.

Kirkwood has often collaborated with Storey to create the store’s windows, as well as his showrooms during sales periods. Storey has worked with brands such as Phoebe English, Christopher Kane, Nike, Hermès, Vionnet and Uniqlo.

The redesign of the space further establishes the brand’s presence on Mount Street. Kirkwood was one of the first British designers to open a store on the Mayfair street and believes it remains the best location for his business.

Since the opening of his store, other London-based designers of his generation, including Roksanda Ilincic, Christopher Kane and most recently, his former employee Sophia Webster, followed suit.

“It’s such a gem of central London; it’s removed from the hustle and bustle of Bond Street and has a more specialized feel. Plus, it’s evolved in a way that now my friends are also my neighbors and that gives a really different edge to the street. You have a lot of French luxury brands, and you have the younger British presence as well,” the designer said.

Coinciding with the refurbishment, Kirkwood has plans to introduce “Beya Bespoke,” a customization service he developed alongside the London-based technology company Ripe. The service allows customers to create personalized versions of the brand’s signature pointed-toe “Beya” loafers by choosing from a range of different colorways and leather types.

Kirkwood sees the future of fashion leading toward personalization and wanted to get an early start to experiment with the technology, with plans to further develop the service and add more styles in the future.

He is also open to the idea of giving away some of the creative control to the customer. “We’ve set some rules, for instance you can’t use alligator together with croc leather, but ultimately the service offers a huge number of color combinations. I’m sure someone can make a really horrible combination if they wanted to, but we think our customers have good taste to make the right decisions. We might also start seeing some interesting combinations we wouldn’t have thought about for ourselves,” Kirkwood said. “It’s somewhat of an experiment, but that’s also the fun of it, leaving it to the customer to really create what they want and make the shoes their own. I think that’s a great experience to have.”

The designer said he chose the “Beya” loafer because it’s a brand signature and best suited for customization, “There are many different levels, you can choose — everything from the colors of the different panels to the stitches, the edges and back straps. So it’s a perfect starter for the project.”

The service will be first introduced at the Mount Street store and will then be launched on the brand’s web site, which is also in the process of a revamp.

“It’s launching in December and we are planning to give it a refreshed look. It will have a shopping element but it will feel like more of a journey, with additional fun elements like the different playlists I put together,” the designer added.

As for his plans for the New Year, the designer said he is keeping an open mind about any changes the recent U.S. election result and Brexit are likely to impose on business.

“I was one to think Brexit was never going to happen, and as soon as that happened, it opened the door to us thinking ‘Why wouldn’t Trump be president?’ It’s the fact that people are in general fed up so they go for the unpredictable,” the designer said. “Certain things like pricing might change but things change anyway, the way the world is now is different from the way the world was five years ago, it’s a game of chess.”

He plans to focus on working closely with his retail partners and, in the long term, revisit the idea of opening his own stores in the U.S., following the closures of his stores in New York’s Meatpacking District and Las Vegas’ Wynn Hotel earlier this year.