The London-based footwear designer Nicholas Kirkwood is going greener by the month, and dreams of creating fully plant-based, biodegradable designs in the not-too-distant future.

LONDON — There is no underestimating how the “Back to the Future” films and other sci-fi stories have shaped Nicholas Kirkwood’s approach to design, and thoughts about the future of footwear. After seeing Marty McFly’s self-lacing Nikes in “Back to the Future Part II,” Kirkwood dreamed up his first pair of shoes, accordion-like creations that could stretch to fit every foot size.

Now it looks as if Kirkwood has shifted his gaze to Dr. Emmett “Doc” Brown’s inventions, in particular the time-traveling DeLorean that’s powered by whatever the wild-eyed scientist happens to pluck from the garbage heap and feed into the car’s Mr. Fusion energy reactor. For Kirkwood, though, luxury footwear of the future won’t be made from old beer cans and banana skins, but rather from plant-based, food industry waste.

“It’s a pipe dream, but there’s a very strong chance the technology will go there. A lot of it is there already,” said Kirkwood in an interview from his base in London’s Soho, where he’s been quarantining, developing his key spring 2021 collection and working toward creating sustainable, and biodegradable, designs.

Kirkwood, a pioneer in the use of environmentally friendly materials and processes for luxury footwear, said there are already new technologies that can create organic polyurethane plastic to give shoes their stretch. Looking ahead, he is hoping to ply cactus, bamboo, or apple core waste into leathers that can match the quality and aesthetics of calfskin.

To mark Earth Day in 2019, he reimagined his Beya mule as a slingback for Net-a-porter, working with recycled denim and leather uppers that underwent a toxin-free, chrome tanning process. Insoles were created with 100 percent recycled carton cardboard, while the leather-covered block heels were made of ontano wood, which can be dried naturally rather than with chemicals.

Kirkwood plans to showcase much of the research and development that he’s been pursuing over the past few years in his spring 2021 collection, which will be 60 percent biodegradable, 20 percent chrome-free, and 20 percent using stock from his archive. 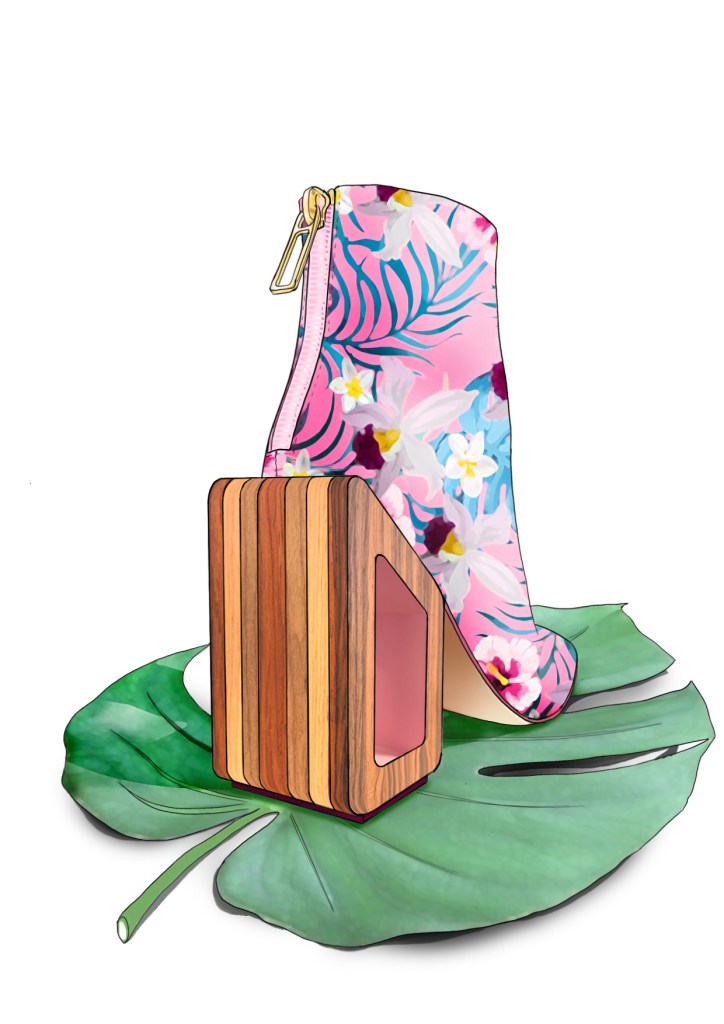 Spring 2021 will also be the first time the shoes’ uppers are made from fully biodegradable materials, such as organic silk, wool, hemp, suede and nappa leather. The shoes will have recycled soles and biodegradable linings, which he has used in past designs.

He’s using a mix of contrasting wood for the heels: The theme is mid-20th-century Brazil, and particularly the furniture and architecture of the period. Kirkwood said his use of wood fits the theme, and his ambitions in the green space.

Kirkwood believes he’s made big leaps in the last two to three years, testing everything from glues and backings to production techniques, all with one thought in mind.

“Every element should be less impactful on the environment as possible. Of course, there are options such as carbon offsetting, but for me, that should only be used for things that you absolutely cannot do in a better way,” the designer said.

Luxury footwear is a famously toxin-filled, wasteful industry where new shoes are simply discarded, rather than recycled, if they don’t pass quality control. It is also a challenging industry for the eco-minded: Unlike clothing, footwear’s various components need to be held together by glue, while the tanning process regularly dumps metal- and chrome-based chemicals into the environment.

High heels, which are usually made from petrochemical-based plastics, are a particular challenge.

“They’re a baby step toward something better, and I’m currently trying to look at more organic solutions, avoid the use of plastic — or highly minimize it,” he said.

Heels aside, Kirkwood believes there are lessons to be learned from sports brands, which have been making fully recycled, and recyclable, shoes, or ones that are almost 100 percent organic.

A sport shoe’s structure is far simpler and it has far fewer components, “but I think there are a lot of lessons that high fashion and luxury brands can take from sports brands, because they are pioneering many of the technologies that will ultimately be used in other ways,” he said.

“And in many cases, it takes a huge amount of money and time to develop these materials or techniques to make these things happen. They’re in a better position to start that ball rolling.”

Kirkwood said for a luxury brand like his, there is no guidebook, and the biggest hurdles are in the sheer time it takes for research and testing components such as recycled leather soles or biodegradable linings, both of which he’s been using for the last two to three years. Then there are the challenges around cost, quality, supplier reliability, and minimums, which can often be higher with innovative or sustainable components.

The designer said he’s still struggling to develop a biodegradable calfskin that fits his quality and price requirements. “I still want to use calf, it’s a wonderful material, but the quality just hasn’t been there, or the quality is there, but it’s unrealistically expensive. It’s about finding a middle ground. I think it’s at least a few more months of development — but we’re close,” said Kirkwood.

Another challenge has been to make all of these changes invisible to the luxury consumer.

“If sustainability within this field is going to have a future, the aesthetic cannot be defined by the fact that these products are organic. Tesla didn’t decide to make an ‘electric-looking’ car. They wanted to make a superfast sports car that also happens to be electric. That’s very much the approach I’m taking — and I think it’ll become the norm. For this to be something that works for everybody, it has to be a natural choice that doesn’t come with a higher cost.”

Kirkwood is also concerned about the afterlife of his shoes: The brand already offers repairs at its Mount Street flagship in London, and the designer now wants to educate customers about the best way to dispose of them. “We’re looking at options where people can bring them back to us, and we safely and correctly put them in an environment where they will decompose.

“It’s not going to be an easy journey, and we’re far from perfect, but I am honestly committed to creating a new best practice,” he said.

He’s also been working closely with suppliers, urging them to switch to renewable energy, and eventually wants to track the entire supply chain and production process.

Kirkwood, whose business is backed by LVMH Moët Hennessy Louis Vuitton, was pursuing his sustainability agenda long before Stella McCartney arrived as a special environmental adviser to LVMH chairman and chief executive officer Bernard Arnault. McCartney took up the role after selling a minority stake in her business to LVMH last year.

He also argues that LVMH has long been an environmentally aware company.

“They have a strong set of values in creativity, innovation, excellence and entrepreneurial spirit. Sustainability solutions, social responsibility and supporting creative young talent very much fit into that. We’ve had a department working, advising and giving guidelines within the group for more than 25 years, and as technology is getting better and more prevalent, they’ve very much committed to sustainable solutions for the future.”

As for McCartney, Kirkwood said she is going to play a big role, helping to advise the group, and the individual brands, based on her own research and findings.

Kirkwood believes it’s an exciting time to be dreaming up shoe designs and sustainability solutions.

“So many suppliers are looking at their structures, supply chain, methods of working and how they can better their product. They see it as a challenge. That’s where the innovation in this industry is right now: It’s on the materials themselves and the new technologies that are able to make everything happen.”

Although he’s stuck in Soho — unable to travel and visit those suppliers and factories — Kirkwood said the coronavirus will undoubtedly bring positive change to the industry.

“Devastating as this whole situation has been on lives and business, it’s also a chance for a giant reset. It gives us the time to reflect on our values, and ask ‘What are the things we want to take forward? What are the things we want to do more of? How can we do better?’ I hope this world becomes more caring, creative, and focused, and I do feel like there will be a collective responsibility toward the environment. People are realizing that nature has time to breathe, and they don’t want to ruin that.”