Nike today is debuting Cosmic Unity, a new sustainable footwear and apparel collection that brings its Move to Zero initiative to the hardwood.

Cosmic Unity is Nike’s first performance shoe made of at least 25 percent recycled content by weight in the collar lining, sock liner and top cloth, tongue, laces, cable detail in the forefoot and the Swoosh. The shoe, launching on Feb. 26, also features a Crater Foam insole used in its lifestyle footwear, but adjusted for basketball performance, a rubber outsole and midsole cushioning made from recycled foam scraps from the factory floors.

“We’re learning every day,” said Ross Klein, Nike senior creative director for performance footwear . “We are creating materials and new methods on our journey to the future.”

Klein said the Space Hippie sneaker from 2020 set the foundation for the Cosmic Unity performance shoe, which is named after Nike’s mission to move the world forward in sport, sustainability and unity, and took two to three years of development.

“It was two to three years of failing and doing it again, but we were okay with it because we have an awesome team that says it’s OK to fail as long as it’s progress forward,” he explained. “We said when it’s right, it’ll be ready.” 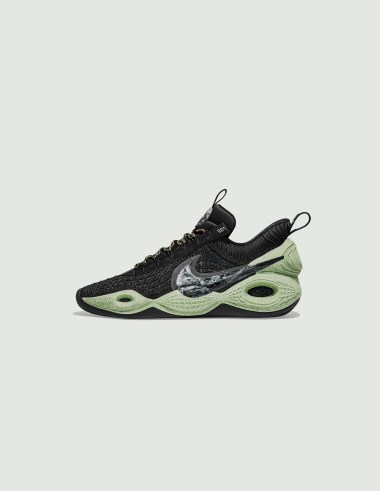 Nike began its wear testing program in North America with athletes Anthony Davis of the Los Angeles Lakers and A’Ja Wilson, the power forward of the Las Vegas Aces and reigning WNBA MVP. “It was different, never thought I’d be playing in a shoe with recycled material,” she said. “It was super light and I love the look of it. Once I got them and got on the court I thought it’s good on both ends for the athlete and for the environment. I’m excited to continue to play in it.”

The Hopkins, S.C.-native wrapped a stellar season with the Las Vegas Aces, securing her first WNBA MVP award. The 24-year-old was recently celebrated by her alma mater, University of South Carolina, with a statue in her honor that was unveiled on Dr. Martin Luther King Jr. Day. She led the South Carolina Gamecocks to their first NCAA Women’s Basketball Championship in 2017 and was drafted first overall by the Aces in 2018. The team competed in the bubble in 2020 and went to the finals, where they fell to the Seattle Storm.

The WNBA dedicated its 2020 season to the Say Her Name campaign and Breonna Taylor, who was fatally shot in her apartment by Louisville, Ky., police.

“When you think about the WNBA, they’ve always been at the forefront of talks that people don’t want to have,” Wilson said. “I was hesitant going into the bubble, but then I said I want to be part of something bigger than me and bigger than basketball. We’re women that use our platform for the voiceless and amplify the voices of women that aren’t heard and we know what it’s like.”

She believes the women of the WNBA did a great job of messaging in the 2020 season and fans can expect more this year.

“As a member of the WNBA Social Justice council, we’ve had Zoom calls, and that will carry on,” she said, adding that former First Lady Michelle Obama and politician and voting rights activist Stacey Abrams have participated in the past. “We have some things in the works that’ll shake the table.”