The Go FlyEase has a variety of design features allowing the wearer to step in and go.

Called Nike Go FlyEase, the shoe features a bi-staple hinge to keep it open — or in the ready position — when waiting to be used. Once the foot is inserted and the wearer steps down, the hinge releases and the shoe snaps shut to fit securely. It also features a flexible tensioner around the outside made from material used on the bottom of shoes for durability.

Nike has also reimagined the process used by many to take off their shoes. Instead of just stepping on the heel, the Go FlyEase has a special “kickstand heel” that will snap the shoe open when stepped on. The design itself was inspired by a diving board to both look and feel good. The underfoot is cushioned.

The FlyEase technology has been employed by Nike in the past in its basketball, running and sportswear footwear, but the other versions all required the use of at least one hand to secure the shoes before they could be worn.

Sarah Reinertsen, a Paralympic triathlete who had one leg amputated above the knee as a child as a result of a bone growth disorder, was the lead designer on the Go FlyEase. “It’s unlike any silhouette seen from Nike before,” she said. 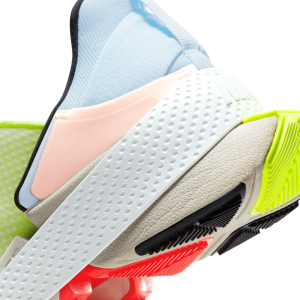 The shoe’s tensioner strap and kickstand heel allows people to step in and go.

Bebe Vio, a champion wheelchair fencer, is also a fan of the shoe. “Usually I spend so much time to get in my shoes,” she said. “With the Nike Go FlyEase, I just need to put my feet in and jump on it. The shoes are a new kind of technology, not only for adaptive athletes but for everyone’s real life.”

But the shoe is not targeted exclusively to the disabled, it’s intended to appeal to anyone seeking a hands-free alternative. Reinertsen said that can include parents holding toddlers, dogwalkers rushing to get out of the house, or yogis who are running late for a class.

There are hands-free shoes from other brands, but they’re designed mainly for those with dexterity issues while the Nike offering is intended for a wider audience.

What it’s not intended for, however, is long-distance running. “I wouldn’t do an Ironaman in it,” Reinertsen said. Instead, she categorized it “an everyday performance” or sportswear shoe.

She said that while the shoe looks simple, there was an enormous amount of design and engineering that went into its creation. “It’s mechanically complicated,” she said. And while easy to use, the shoes will come with directions on the inside top of the box on how they are activated.

The shoe also fits into Nike’s push for sustainability since the materials used for the Go FlyEase can be recycled into Nike Grind, a post-consumer material that can be used in a variety of products.

Reinertsen said the Go FlyEase is the latest example of Nike’s mission to keep innovating. “We have a long history of listening to athletes,” she said, adding “better is temporary.”