Onitsuka Tiger is celebrating its 70th anniversary this year by collaborating with seven designers, beginning on July 4 with Takayuki Chino, Cinoh designer and winner of the 2019 Tokyo Fashion Award.

Cinoh, which held its debut runway show in March, designed an all-white version of the Onitsuka Tiger Basketball Lo sneaker as well as a navy suit jacket and matching trousers that both sport Tiger’s signature tri-color pattern in red, navy and white.

Tiger is launching its next collaboration later in the month with the Kim Kiroic-led contemporary footwear and apparel brand KKtp, which is an abbreviation for “King’s knight’s pawn”; followed by Christian Dada designer Masanori Morikawa in August; Staffonly’s Shimo Zhou and Une Yea in September; Kathleen Hanhee Kye in October, and Sulvam designer Teppei Fujita in November. The final collaboration with an unnamed designer will release in December.

“Our founder, Kihachiro Onitsuka, started his company to support youth development back in the days. With a similar mentality in mind, we wanted to support young Millennial designers achieve their goals,” said Ryoji Shoda, director executive officer and head of Onitsuka Tiger. 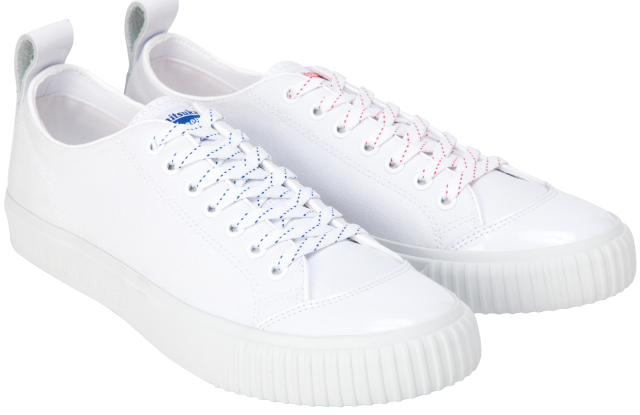 The Onitsuka Tiger x Cinoh collaboration is intended to complement the July 27 launch of the Street Fighter V x Onitsuka Tiger Mexico 66SD sneakers, inspired by fighting game character Chun-Li. The limited-release sneakers will also come with a special code for gamers to unlock the pair in the game. Tiger also unveiled all-white and black versions of the Mexico 66SD sneakers with Givenchy at the French fashion house’s runway presentation at Pitti Uomo in June.

“We don’t intend to do a lot of collaborations. For us, collaborations are very special,” Shoda said. “We think that it should be something innovative, challenging, and something different from others. We also wanted to touch upon different audiences and be able to offer something for everyone.”

According to Shoda, the collaborations are not part of an expansion strategy, though Onitsuka Tiger has plans to open a dozen stores in the U.S. in the next few years. The brand recently opened a 1,100-square-foot store on Lafayette Street in New York City and will add a second unit this fall at 127 Greene Street.