A roundup of the presentations from Paris Fashion Week Men's.

By Stephanie Hirschmiller on January 31, 2020

Pierre Hardy introduced a new skate shoe for fall and emblazoned sneakers and city boots with bandana prints — done the Pierre Hardy way, naturally. He reimagined the print by introducing geometric cubes and little cubic flowers. He was evoking a state of mind, “a feeling of youth and simplicity,” he explained.

“There is also the idea of liberty with a skateboard where you don’t have to depend on a car or the traffic. You can go wherever you want. It’s a great feeling,” he said, in words certain to resonate with Parisians coping with an almost two-month-long transport strike.

There was a gender-fluid element to the collection. “I’m a kid from the Seventies so gender fluidity is something we experimented with a lot of times and in many ways,” the designer said. For him, it’s not so much about labeling, “it’s more I don’t care, I like it, I wear it, I take it. It’s an easiness.”

In keeping with the heels for men trend, he introduced a new 6-cm. heel on some of his boots. “This guy is sexier,” he said, noting that while it was only a couple of inches higher than usual, “the margin to play for boys is much narrower compared with that for a woman.” 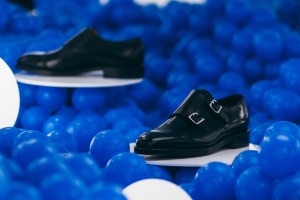 In a departure from the brand’s usual presentation format, John Lobb chief executive officer Philippe Gonzales and creative director Paula Gerbase toasted fall with a dinner at a grand hôtel particulier in Paris, once owned by the mistress of the Emperor Napoleon.

The collection celebrated the 75th anniversary of its famous William double monk strap, and both historic and contemporary versions were displayed via some ingenious keyhole installations where the shoes appeared in a giant ball pit like a children’s play park.

Talk turned to sustainability. Lobb is sustainable by dint of its timeless quality, Gerbase said. “It lasts a lifetime,” she said, adding that there is a shoe shine service in the store and the brand also uses offcuts for the linings and interworkings. Moreover, customers can have their shoes resoled at its factory.

“It will feel like a new shoe but with your journey embedded in the leather,” she said. “We don’t want you to buy the product over and over, we want you to love and care for it.”

The evening ended outside on the terrace where blanket-wrapped guests were serenaded by traditional Cornish choir Fisherman’s Friend, with rousing renditions of ditties such as “Drunken Sailor.” The Hermès-owned brand may hail from Northampton, England, but the countryside of Cornwall is its spiritual home as the first shoe was inspired by coastal walks around the cliffs. 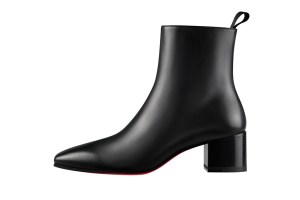 While Christian Louboutin’s 60-mm studded square-toe boots are the label’s highest yet, they were totally in step with the current vogue. While sneakers are still a brand benchmark, even the HappyRui skate shoes featured thick, elevated soles.

Elsewhere, function combined with form in retro VS kicks with Velcro fastenings and laceless sneakers with grosgrain ribbon tongues. Evening-centric styles featured luxe Made in France fabrics like velvets and jacquards shot through with Lurex, while city sandals came with studs.

Finally, there was a new après-ski snow boot collection dubbed After Snow, which came with the designer’s signature red soles — complete with grips for icy climes. 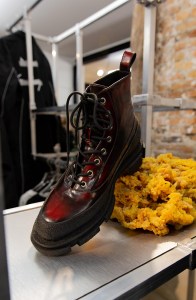 In a buzzy presentation at the brand’s Marais showroom, the footwear label launched a capsule collection with Los Angeles-based men’s wear brand Second Layer, which featured both shoes and clothing.

Footwear styles were new variations on its signature Gao style, a Gao Combat and Gao Creeper, while there were also coats, jackets, sweatshirts, T-shirts and caps that played on the two brands’ workwear roots.

Elsewhere, Both introduced a series of women’s heels inspired by its Gao Runner kicks, plus thigh-high rubber biker boots for men and platform versions of signature sneaker styles. It also debuted a glow-in-the-dark rubber material. 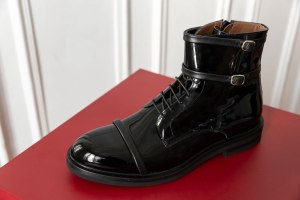 The monks officially come in women’s sizing, but the designer said she’s been getting a lot of female requests regarding the other styles, too. The collection will make its debut in London. “Harrods is relaunching its men’s shoe department for February-March, so we’re doing them an exclusive early drop,” Malone revealed. 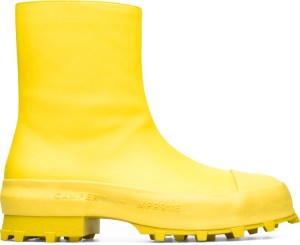 CamperLab celebrated the debut collection of new creative director Achilles Gabriel. The former Marni footwear designer also has his own shoe and ready-to-wear label, Ion. “The whole idea was to bring things back to the brand’s Mallorcan heritage, but in a surreal version. I wanted to imply more handicrafts but to make it more human and warm,” he said. Hero shoes were work boots in sunshine yellow and sky blue and puffy Tabi sandals that came with socks in the same color. 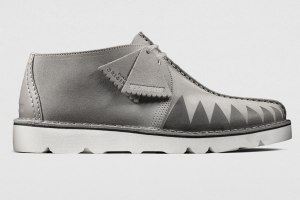 British shoemaker Clarks Originals has teamed with Japanese streetwear brand Neighborhood on two of its most iconic styles, the Wallabee and the Desert Trek. The former comes in black ballistic nylon combined with a suede vamp and Gore-Tex lining while the latter is reimagined with the Neighborhood print on gray suede. Both styles have been updated with Vibram soles for superior grip. 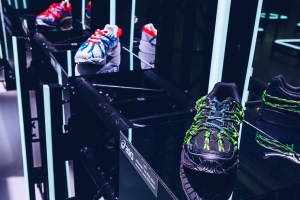 LVMH Prize-winning designer Rok Hwang of Rokh teamed with Asics on a limited-edition sneaker capsule, which showcased at the Gaîté Lyrique theater in Paris with an evening of live music performances and interactive installations. “We started this collaboration and communication very organically and genuinely for the love of technology and innovation,” Hwang said. “Asics is a company with strong vision and technology; Rokh’s artisan craft and innovation has come together to build this story and collaboration,” he added. The unisex collection of 100 pairs will be sold exclusively at Dover Street Market London.