Malone Souliers
Mary Alice Malone has launched her first men’s collection and it’s all about the loafer. They come in patent, pony, embossed velvets and woven leathers, each bearing the hallmark double strap that is the label’s DNA. “Just as the Malone woman is a very feminine woman, I wanted our man to be a very masculine man. We were very careful that it was a man’s last and that the lines were very manly. I never wanted it to be a women’s shoe for men,” the creative director said. So who is the Malone man? “Idris Elba,” she laughed, “I’d love to see him wearing them with a tux on the red carpet.”

Both Paris
Vulcanized rubber originals Both Paris has debuted bags, wallets and luggage accessories for spring 2020 with totes, messenger and bucket shapes that are functional. The Gao sneaker — a favorite amongst Gigi and Bella Hadid — now comes in a new Chelsea boot and a Derby silhouette and the season’s palette features sandy shades injected with flashes of acid yellow. New experimental cracked earth textures and rubber integrated with cork chips and natural jute complete the offering. 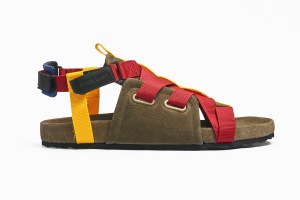 Pierre Hardy
The designer imagined three gangs for spring: the sporty guys, adventure guys and the dandies. Each had his own style and his own shoe-drobe. The sporty contingent wore sneakers, like the new Vision with its off-key geometric heel, while the adventurers stepped out in desert boots and sandals tied with nylon ribbon. Hardy said they’d been inspired by Au Vieux Campeur, a sports shop near his studio in Saint Germain. “Except we’re the young campers,” he joked. As for the dandies, they drew sophisticated slip-ons, super simple, devoid of laces or extraneous stitching. 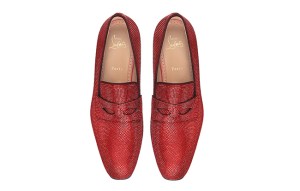 Christian Louboutin
Christian Louboutin staged his spring 2020 presentation in the Musée des Arts Forains, and the collection had all the fun of a fair. There were loafers in a whimsical tattoo print, red velvet and patent Derby “clown shoes” with exaggerated toe caps, and crystal-festooned loafers in scarlet — perfect for an aspiring ringmaster. The designer was fascinated by the circus as a child and used to visit the museum, which is dedicated to 19th-century fairground arts. 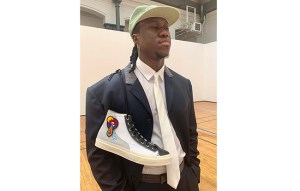 Byredo
Byredo creative director Ben Gorham has launched his debut sneaker. Dubbed Byproduct, the high-top styles were unveiled at a presentation modeled by a squad of current and former basketball players. “I’ve been wanting to make a sneaker since I laced up my first Air Jordans over 30 years ago,” Gorham said. Each pair is pieced together from leather left over from the production of Byredo handbags, making the upper of each entirely unique.