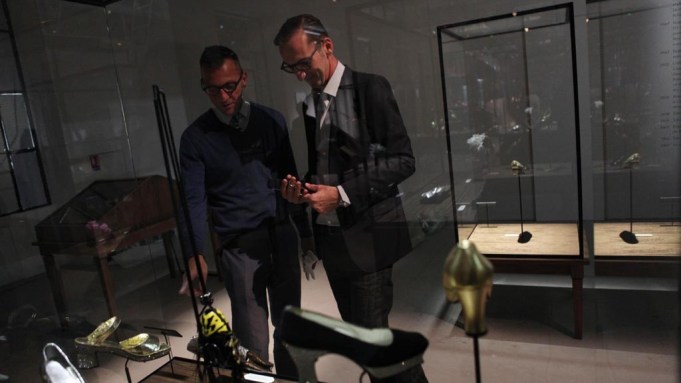 PARIS — When is a shoe not a shoe? When it is a work of art.

For his “Virgule, etc…in the Footsteps of Roger Vivier” exhibition, which opens Wednesday, fashion curator Olivier Saillard has given every single shoe — there are about 170 in the show — an alternative name, like artworks in a museum.

With titles like “The Mona Lisa of Shoemakers” or “Floorboard Skater,” little more proof of Saillard’s humor is needed.

“I nearly said no to the exhibition, because I was opening [the retrospective of Azzedine Alaïa at the reopened Palais Galliera], but I said to myself, either I find an idea and have fun with it, or I’m stupid and I need to give up this job,” Saillard told WWD during a preview of the show, on which he was putting finishing touches Sunday before an opening party Monday night.

The exhibition, in the Saut du Loup section of the Palais de Tokyo, evokes 19th-century museums like the Louvre or Prado, with dimmed lighting and glass cases in which the shoes are, in Saillard’s words, “like caged birds.”

The collection spans some of Roger Vivier’s earliest designs, including models made for Christian Dior in the Fifties, through the decades when he created his iconic stiletto and comma heels, and includes recent models by current creative director Bruno Frisoni — even one that is currently in stores.

“The light Olivier sheds on my work is what interests me,” said Frisoni, who joined Roger Vivier in 2002 and is largely credited with rebuilding the brand. “The result is what Roger Vivier represents today for both him and the public.”

Rather than being grouped by era, the works are gathered into art movements — “French Paintings” and “Egypt Department,” for example.

Alongside the shoes, the exhibition, which runs through Nov. 18, includes drawings and collages by Vivier and sketches by Frisoni.

Certain items are on loan from museums including the Galliera, Toronto’s Bata Shoe Museum, The Metropolitan Museum of Art in New York and the Musée de la Chaussure in Romans, France.

But the majority is part of a collection of 100 shoes sold by Vivier’s adoptive son, Benoît, at auction and bought by the brand in December 2011.

On his choices — which include designs worn by Brigitte Bardot and Marlene Dietrich, as well as African models made for Saint Laurent — Saillard said: “You should always imagine if there were a fire, which ones would you take with you to save them? There were a lot.”

The retrospective follows the April publication of a book about the house’s history, while some of Frisoni’s recent designs have delved into the archives for inspiration.

“It was the right time,” said Frisoni. “Today, Roger Vivier means something to people. Ten years ago, when we relaunched the brand, you really needed to be involved in fashion; it wasn’t part of popular culture.”