The designer will present his premier footwear line under his own label in New York today and in Paris later this month. 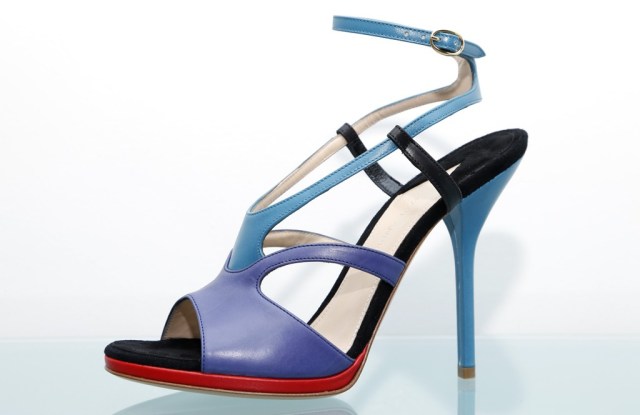 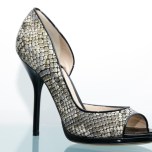 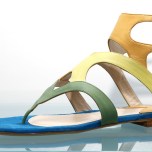 NEW YORK — Paul Andrew is going out on his own for the upcoming spring season.

After spending a decade at Donna Karan as vice president of Collection accessories design, 33-year-old Andrew will present his premier footwear line under his own label here today and in Paris later this month — an independent venture entirely self-funded thus far.

The 16-style collection includes the high-heeled Sparta, a gladiator style adorned with tarnished gold elements and embroidery work done by hand in India. Andrew is also seeking to set his collection apart by creating lighter, more refined single-sole shoes, save for a few sleek wedges.

“I feel like everything out there is so heavy and ostentatious, it seems so over the top. It was time for the return of a more fine, sexy shoe that was comfortable also,” Andrew told WWD, explaining that he’s implemented a “slither of a platform” into the construction of the shoe, underneath the insole — remaining invisible to wearers and onlookers. “In my experience talking to women who’ve been wearing thin-soled shoes again after having worn platforms for years, the comfort is just not there.”

He takes it a step further by carving out the platform and filling it with industrial padding to ensure optimal comfort (as far as a stiletto goes).

“My ambition is for these shoes to be beautiful and desirable but also technically accomplished and resolved. Often in shoemaking, comfort is forgotten, the anatomy of the foot is not fully considered,” Andrew said.

The range of pumps, sandals, wedges and flats will retail between $645 for a peep-toe pump and $1,695 for a wedge entirely covered in python, with Swarovski-encrusted styles creeping up to almost $3,000. The main color palette is a Capri blue the designer combined with aloe and a vibrant red — heavily inspired by a John Chamberlain exhibit Andrew saw at the Solomon R. Guggenheim Museum here. He said the cubist movement was a key reference in his work, too, as were Richard Serra’s sculptures and Pol Chambost’s ceramics.

Andrew’s key silhouette is the Persia — his reinterpretation of the classic d’orsay construction. It’s cut out on the outside and open on the inside. The style comes in color-blocked grass, citrine and aloe calfskin, as well as sleek black, bright yellow, flame red, nude and hand-painted python options. Then there’s the Artemis — a trans-seasonal, slightly edgier day-to-evening sandal that evolved from the Persia — and the Sphinx, an even lighter, sleeker version of the Artemis.

Andrew spent 15 years in the industry, honing his craft at Calvin Klein, Alexander McQueen and Narciso Rodriguez prior to landing at Donna Karan, where he will remain as a freelance consultant on all accessory design.