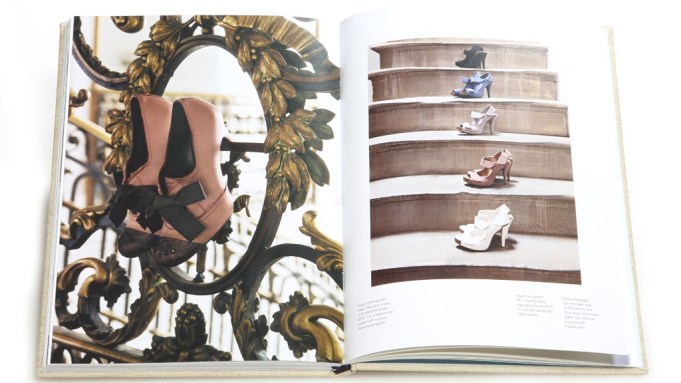 Tonight, at the CD Network showroom space here, Pedro García Vidal will unveil “Pedro García, Three Generations of Shoemakers,” the story of the 87-year-old-company and his father and its founder, the first Pedro García.

“The book started off as an biography of my father,” the elder Pedro García (referred to as the “second Pedro”) told WWD of his more than 50 years in the business, seated in a space in West Chelsea alongside son Pedro García (the “third Pedro”) and daughter Mila García, creative director and chief executive officer of the brand, respectively. “But it turned into a story about a third generation family business — and at the end [of the book] I talk about my personal life, hobbies and how I brought the brand to America.”

In addition to toasting the book, the family is in town to launch its latest resort collection. Offerings include updated, neon versions of the best-selling Swarovski Element-encrusted sandals (which come in silver and gold this spring) and a range of pastel suede styles with like colored, printed palm tree motifs.

“They are so linear. It’s just about the straps with the Velcro [closure] and a basic leather sole. You can dress up or dress down,” the third Pedro said of the vibrant pink, yellow, blue and orange shoes, also available in more delicate, streamlined silhouettes for the first time that retail from $500 to $650. “The approach is not commercial, it’s clean and calm. The intention is not to make noise, it’s to make a good product. Designers are searching for architectural or complicated — and those words are empty to me.”

Currently, the brand is carried in about 1,000 doors worldwide, and the largest region for sales is the U.S., followed by Italy — which was the top market until last year. There is one freestanding door — a flagship in Madrid — but the family is pursuing opening additional locations in the near future.

“We were almost ready to open five to six more stores in 2008 but the economic situation started getting so difficult. We had to take some time for our company to become healthy and strong. The last two years we’ve maintained business,” Mila García said, adding the company owns its own factory in Elda, Spain, where 95 percent of the brand’s shoes are produced (the remaining 5 percent contains specific items that need to be outsourced).

In 2011, the company had wholesale sales of 13 million euros — which translates to over $40 million at the retail level — and Mila García anticipates business to grow by about 10 percent by year’s end.

Before opening another physical flagship, the brand wants to concentrate on its digital one at pedrogarcia.com. In September, the Web site will launch e-commerce — first in Europe, followed by the U.S. six months later.

“We want to grow, but we don’t want to go crazy,” the third Pedro said.