The collection will serve everyone from elite racers to weekend warriors.

Puma is getting more serious about the everyday runner.

Although the brand has a long history serving elite racers such as Usain Bolt and former U.S. Olympic marathoner Bill Rodgers, it is now turning its attention to the general running community.

In a virtual briefing on Thursday, Puma Running unveiled a collection of shoes that feature new and proprietary technology that will serve everyone from weekend joggers to serious marathoners.

“A few years ago, we set the mission to be a well-known running brand,” said Erin Longin, global director of the running and training business unit at Puma. “We’re the number-three sports brand globally and we have credibility in basketball, soccer and golf,” and a long commitment to track and field. “So we felt the time was right to include distance and road running. We knew we wanted to create a new line of top-tier product.” 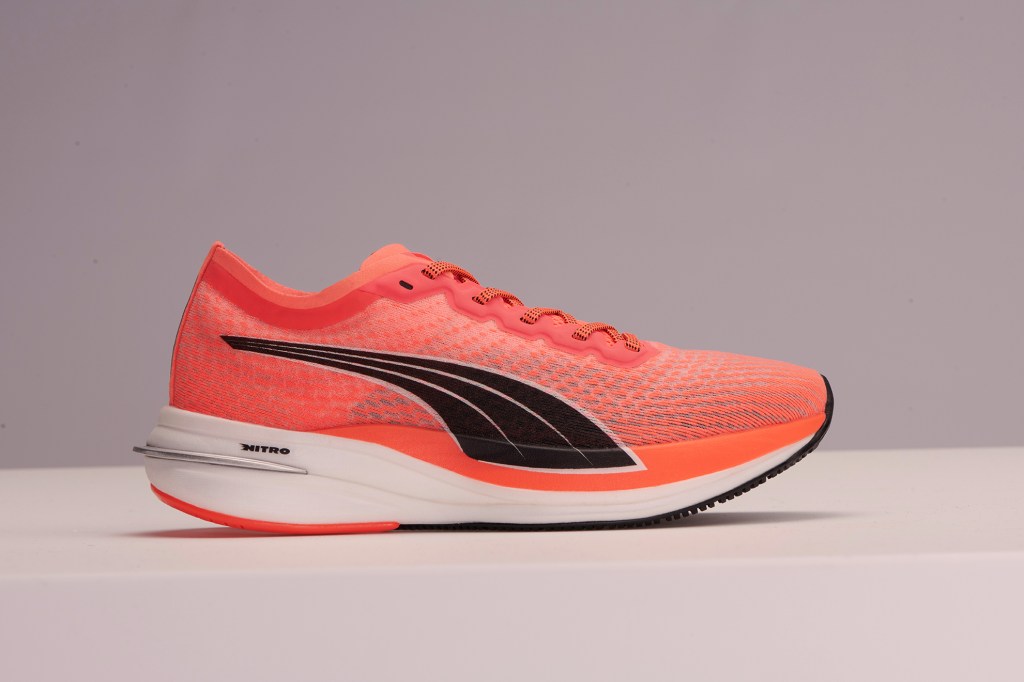 The company turned to internal and external experts in biomechanics to develop five key styles: Deviate, Deviate Elite, Velocity, Liberate and Eternity. All of the shoes feature a new foam technology called Nitro, a nitrogen-infused product that is 50 percent lighter than traditional EVA foam, according to Todd Falker, product line manager for running at Puma. The shoes are seamless, lightweight, feature a proprietary carbon plate called Innoplate and a durable rubber sole, Pumagrip, that is 31 percent more resistant to slips than other products. Certain models also offer RunGuide, a firm density rim that keeps the foot centered on the platform for stability.

“With Puma Running, we set out to create an effortless run for runners,” said Longin. “Our new running shoes feature our most innovative technologies, like Nitro foam, making the shoes extremely lightweight and responsive, to help you use less energy and run comfortably so you can reach your goals.”

The Puma Running collection will include models specially designed for female runners that include a new women’s last. The company is also showing its commitment to women by partnering with Women Win, a global fund to advance women’s rights through sport, to establish greater gender equity in running. Puma has also recently signed some of the top distance athletes in the sport — Molly Seidel, Gesa Krause, Aisha Praught-Leer, Fiona O’Keefe and Taylor Werner — to help in those efforts.

The Puma Running collection will launch globally on March 4 and in the U.S. on March 9. Retail prices will range from $110 for the Liberate to $200 for the Deviate Elite. They will be sold on the Puma website, at its flagship in New York City, at Jack Rabbit and other select retailers.

The collection will be marketed through a campaign, Spark Change, which speaks to the company’s discovery that running can result in changes in physical and mental health.

“The more we researched our consumer we learned that the idea of change resonates with runners,” Longin said. “Runners always strive for change, to better themselves and the greater good so we landed on the concept of Spark Change to bring meaning and energy to everything we do in running.”

Puma is not alone in continuing to push the envelope with its running shoes. Nike last month introduced Go FlyEase, its first hands-free sneaker, and Under Armour earlier this month unveiled the UA Flow Velociti Wind, a lightweight, performance running shoe that eliminates the heavy rubber outsole.

Running has surged in popularity during the pandemic as people have looked for ways to be active while they’re working from home.