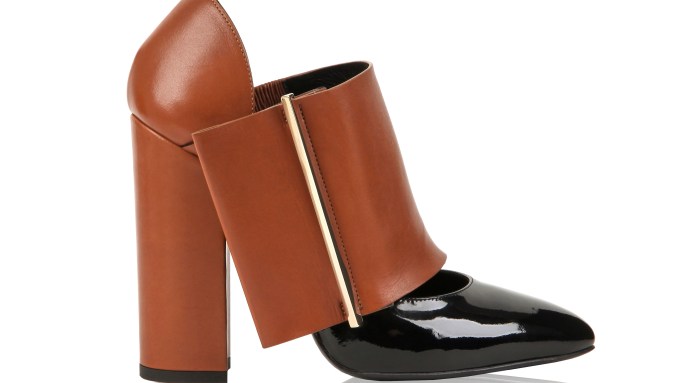 LONDON — London-based, Parsons-educated shoe designer Richard Braqo is showing his collection in New York this week, and will stage a presentation in Paris during Paris Fashion Week.

His fall called “Bifurcation,” was inspired by Alain De Botton’s “Essays In Love.” The designer was drawn to the tension in the author’s philosophical analysis of romantic love, and the unfolding journey and imbalance between the male and the female perspectives.

“‘Essays in Love’ had me harkening back to the original biblical myth of the genesis of love and relationships through the well-documented experience of Adam and Eve,” Braqo told WWD. “With that in mind, I sought to create a collection that explored the intersecting points at which both male and female ideas about love collide using familiar silhouettes such as the strapped sandal and the sexiness of a patent leather pump, and conjoining that with the classic mundanity of a men’s monk strap, redesigning the buckle of a monk strap with a signature triangulated gold bar with oversize proportions.”

Seventeen styles will be on show at The Ace Hotel until Feb. 24, then from March 3 to 8, the collection will be at AD Showrooms in Paris.

Nodding to the tumultuous presence of guilt in love, Braqo referenced the serpent that beguiled Eve in the Garden of Eden with a bronze and emerald colored python skin with a sinister and aged finish on boots and also in Braqo’s Core court shoes with signature gold torques. Key styles include the Yasmin Sandal, a fusion of a modernized monk strap with Richard Braqo signature triangulated buckle, conjoined with a dual strap patent leather sandal.