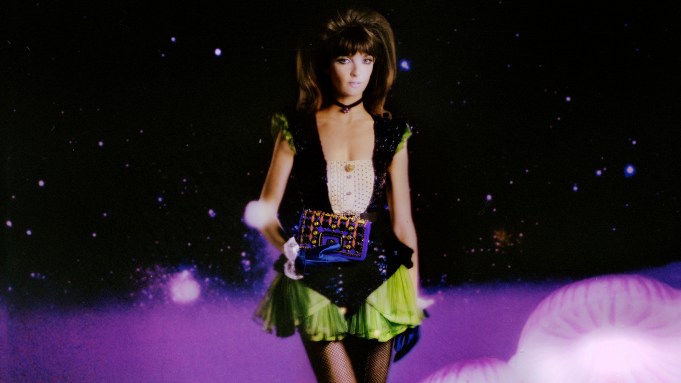 PARIS — Gherardo Felloni is ready to bring the Roger Vivier fantasy back alive — but he’s returning with a refreshed perspective.

The accessories designer is back in Paris for fashion week, yet he chose to stick to the digital realm for his spring 2022 presentation, creating “Flooded” with the director Andrea Danese, a short film that features an original song composed and sung by Felloni himself.

“Digital was here before the pandemic, and it’s still here. In any case, the world is open but not completely, there’s still a big part of our audience in Asia that can’t be here. It’s a little grotesque and dangerous, this idea of going back and doing exactly what you were doing before: something bad happened but we have to think about it and become better, not come back and make the same mistakes,” Felloni said in an interview.

With that in mind, Felloni got creative and released his own version of a ’90s music video, telling the story of a lonely boy who discovers a Roger Vivier box filled with old pictures that encourage him to start dreaming of a new world. In it, these supernatural creatures — played by the likes of Valeria Bruni-Tedeschi, Anna Cleveland and Annabelle Belmondo — come alive, the protagonist is no longer alone and he finds himself singing with none other than Isabella Rossellini.

“It’s a metaphor and it is, of course, linked to the pandemic, but we face those situations of feeling alone or trapped all the time. So the message is that we need to keep dreaming,” said Felloni, who makes a flash appearance in the film, disguised as one of the singing and dancing supernatural creatures. “I’m a singer, but I studied opera. This was a completely different genre for me, but working with a composer and going into the studio to record the song ended up being one of the most beautiful parts of the experience.”

In the film, one can see flashes of his new spring 2022 collection, including a pair of gold embroidered gladiator sandals worn by Rossellini, but the focus is on the story and Felloni’s message about daring to dream.

“When you launch a project online, it’s important to respect the audience, which might not be 100 percent linked to fashion, so you have to invite them to follow you and tell a story beyond product. Of course, in the next few days you’ll see us posting the product, too, but first you’ll see a story, get curious and then be more ready to discover product,” he added.

Those products include some of the highest heels he’s ever designed in his career, including a pair of extra-high platform mules in glossy neon shades that he describes as “lap dancer, Barbie shoes.”

“It’s a lot of party shoes, everything is joyful because we have to go out and be happy again. In my whole career, at Miu Miu and now Vivier, I’ve been a big fan of flats and kitten heels, but I now realize that women want to have that choice of higher heels and most shops now mostly sell sneakers and low heels only,” he said. “But even the highest heels have platforms and aren’t impossible to walk in. I don’t like it when shoes are too uncomfortable; it’s grotesque in a way.”

Elsewhere in the collection, Felloni also kept developing the brand’s handbags and jewelry ranges which are both fast-growing categories he wants Vivier to become better known for.

For all his renewed focus on the online world, Felloni is not ready to completely give up real-life interactions either. On the day of “Flooded’s” online launch, he also hosted an intimate dinner at Parisian brasserie Le Boeuf sur le Toit, where performers dressed up as the fantastical creatures of the film and Felloni performed the song he composed in front of friends of the brand like Coco Rocha, Catherine Deneuve and  Ines de la Fressange.