Rothy’s Aims for Full Circularity by 2023

Rothy’s is launching a pilot circularity program for its shoes this year.

To create a pair of Rothy’s shoes, discarded plastic bottles are sourced. They are then hot-washed, chipped into flakes and made into small beads. The material is then fused into filament fiber to make an environmentally-friendly yarn.

Rothy’s is doubling down on sustainability. The brand, which managed to remain profitable throughout the pandemic, revealed that it has committed to reach circular production by 2023.

It’s a concept that the entire fashion industry is striving for as the waste crisis continues to build. More than 100 million tons of nonrenewable resources are used each year to produce clothing, and by 2050, the textile industry alone could account for a quarter of the global carbon budget, according to data from the Ellen MacArthur Foundation.

At its core, the brand is a direct-to-consumer sustainable company focused on reducing waste in every step of the shoemaking process. The brand launched in 2015 with washable shoes made out of discarded plastic bottles and created through a 3D knitting process that uses the exact amount of material needed.

“Sustainability is an inherent benefit baked into our model, not an add-on or an afterthought. Rothy’s has been building a circular model since Day One, with a closed loop future in mind,” cofounder and chief executive officer Stephen Hawthornthwaite said.

Rothy’s also owns and operates a factory in China — allowing for a streamlined supply chain and production line that allows the company to control costs.

“What Rothy’s is aiming to do is to fill every gap in the journey of a product life cycle from how it’s sourced, how it’s designed and manufactured, and then eventually how it is broken down and remade,” explained Saskia van Gendt, Rothy’s head of sustainability, who was tapped for the position last year. “Circularity, in general, symbolizes a product life cycle — and to achieve it, not only is it about how the materials are used, how you’re producing the longevity of the product, but also about closing the loop by offering recycling and end-of-wear solutions.”

To do that, the firm is rolling out a pilot recycling program this year. The goal is to create options that will allow for the deconstruction of the shoe into its main components, so it can then be reprocessed. Twice-recycled materials will then be incorporated into new products.

But the development process isn’t simple.

“This is uncharted territory, it’s not turnkey,” said van Gendt. “There’s no place where we can just send and recycle shoes. We have to develop this. The pilot will help us explore what partners and what systems we need in place in order to recycle shoes.”

In the first year, Rothy’s will be in a testing phase, starting with damaged inventory, and then over the next three years, it will take what it has learned to create a scalable and more sophisticated program, adding partners and eventually taking the program to customers to send in their shoes to recycle.

Though Rothy’s product construction is quite simple, van Gendt said the lack of infrastructure for recycling, and the complexity of footwear design in general, perpetuates the industry’s waste problem. 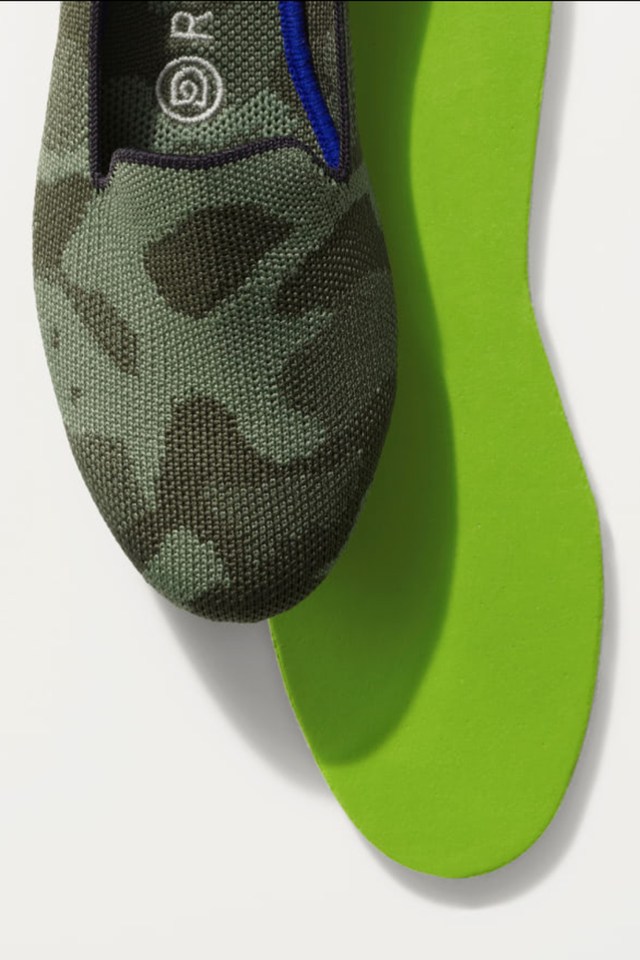 Rothy’s is aiming to reach circular production through a new recycling program and its own sustainability council.  Courtesy Photo

What is key to a circular economy in fashion is collaboration, according to insiders.

In May, Adidas and Allbirds revealed a partnership to innovate manufacturing and supply chain processes and to explore renewable material resources together to create the lowest carbon footprint ever recorded for a sport performance shoe, for instance.

For its new initiatives, Rothy’s is turning to outside sustainability experts, which will include a council of scientists and academics. The group will be comprised of Samata Pattinson, the CEO of Red Carpet Green Dress; Lewis Perkins, the president of the Apparel Impact Institute; sustainability expert Michael Sadowski; Brittany Sierra, founder and CEO of the Sustainable Fashion Forum, and Jing Wang, the director of North Asia for Green Building Certification Inc.

“The opportunity with the council is to make sure that we are getting outside thinking into our sustainability plans, but also making real progress against the goals that we have in place,” said van Gendt. “The aspiration is to create something that works for Rothy’s, but to open-source that to the industry because we know it’s an industrywide problem.”

In addition to its recycling plans, Rothy’s aims for a zero-waste certification by 2022, a process that looks holistically at the factory and how it minimizes waste in the entire operation. Outside of that, the brand is working on purchasing renewable wind energy for its factory, offices and retail stores, plus shifting from air to ocean transportation. And next year, Rothy’s plans to install solar panels to support renewable energy for its China factory.

“When we’re thinking about carbon neutrality, it’s important not just to go automatically to an offset program. So the first step is really reducing our footprint as much as we can directly — shifting our transportation is a big part of it,” said van Gendt, noting that airfreight is about 50 times more carbon-intensive than ocean. “But the material sourcing is probably the biggest component because recycled materials can have up to 70 percent lower carbon footprints than virgin materials.” (Rothy’s also uses ocean-bound marine plastic for its handbags.)

The executive said extending the life of a product is also just as important: an added nine months of wear can reduce its waste, water and carbon footprint by 30 percent.

The brand’s sustainability ethos touches the entire company, including Rothy’s employees. Since COVID-19 hit, Hawthornthwaite said they introduced new benefits, including increased mental health care, expanded parental leave, and unlimited paid time off that will extend through 2021 and beyond in order to foster a long-term, sustainable work environment.

“Last March caught everyone by surprise, but luckily we were in a position of financial strength going into the pandemic,” he said. “Our sales suffered much like everyone in the consumer discretionary category, but we’re proud of the growth we achieved last year.”

Boosted by the comfort and casual work-from-home era, Rothy’s added 450,000 new customers year-over-year, despite reducing its marketing spend by more than 60 percent.

Last year, the brand introduced more than 30 new silhouettes, 250 colorways and entered the handbag category, which contributed just under 10 percent of total sales in 2020.

“We also took 2020 as an opportunity to focus on initiatives that can typically be the most challenging to address during high-growth periods, such as improving internal workflows and processes, investing in our backend, and increasing overall operational excellence. Now that we’re in a place where we’ve optimized our infrastructure, we’re looking to 2021 as a year to take advantage of this and push ahead,” said Hawthornthwaite.

While the brand is focused on its e-commerce model, it remains bullish on brick-and-mortar expansion in 2021. The brand counts five retail stores in San Francisco; New York; Washington, D.C.; Boston, and Los Angeles.