SHOE BUSINESS: “This is the first project where it’s me in the spotlight,” said Rubens Bressanin at a cocktail presentation of his first full collection as artistic director of rebooted French footwear brand Stephane Kélian on Tuesday night in a Paris gallery space. The Italian creative has worked as a freelance designer for 25 years and is based in a sprawling studio near Venice employing 47 designers and working with some 30 brands, including a number of major houses.

For Bressanin the gig comes at the time when the industry could do with some creative fizz. “It’s a tough time for the footwear industry, but for me this is an exciting opportunity. I travel a lot and what I see is a globalization of collections…so many of the brands are managed by two people: [Bernard] Arnault and [François-Henri] Pinault. They are doing a great job but they have the monopoly of fashion which leaves less and less space for independent designers,” said the designer.

“I’m friends with a lot of small independent designers and they are finding it more and more difficult to get into stores; for retailers to have all those big brands takes up a lot of the budget and they have to sacrifice the small designers. In the end, even in fashion, it creates a situation where everything looks the same.”

Kélian had its heyday in the Eighties and Nineties, and Bressanin’s twists on house classics — as a brand known for its woven leathers and modern shapes — include kitten heels and booties with curved heels, and chunky woven leather mules. “Kélian was known for comfortable shoes, he was never one to do stilettos,” said the designer, who was brought in six months ago to revive the brand. He has also done his own square-toe spin on the house’s signature flatform wedge — “It was Kélian who invented it” — moccasin-style shoe on a sneaker bottom with a square toe and woven upper. 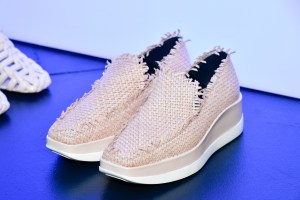 “We went to an old artisan based near Genoa and he used to make the wovens for Kélian in the Eighties. We’ve met a lot of people who were Kélian fans and were excited to participate in the launch,” added the designer.

The line’s palette is red, white and blue. “First of all, those colors are on-trend, but obviously for the relaunch we wanted to be a little bit nationalistic and give a nod to the tricolor [French flag].” As a lover of art and architecture, his references include artists like Alexander Calder, Lucio Fontana and Piet Mondrian.

For distribution, retailers are still being confirmed but Paris concept store L’Exception will host a launch party on Nov. 9, with a dedicated window, with a corner to open in Printemps in late January.

In terms of history, the Stephane Kélian brand grew out of a men’s wear shoe line launched by brothers Georges and Gérard Kéloglanian in 1960 in Romans-sur-Isère, the cradle of France’s footwear industry. Their younger brother Stéphane joined the company in 1974, and in 1978 they launched the Stephane Kélian women’s line partially named after him. The talented creative went on to collaborate with brands including Issey Miyake, Claude Montana and Jean-Paul Gaultier, but the brand entered a slow decline from the late 90s, eventually going out of business.

The liquidated footwear brand in 2007 was acquired by Groupe Royer, France’s largest footwear importer and distributor, which also owns the recently revived Charles Jourdan brand, and holds footwear licenses for the likes of Converse, Von Dutch, Lee Cooper, Morgan and Paul & Joe Sister. Olivia Cognet was the brand’s artistic director from 2014 to 2016.