The retailer checks off another box on its Grand Renovation list of spaces. 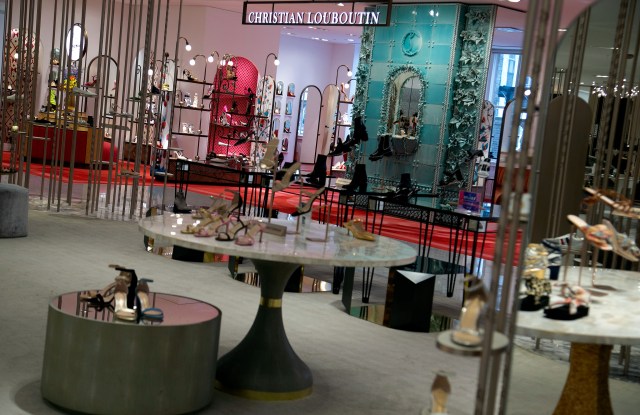 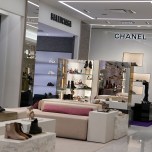 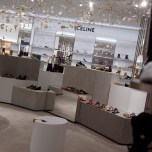 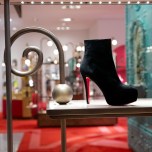 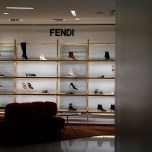 After introducing 10022-Shoe, a department so large, it required its own zip code in 2007, Saks Fifth Avenue is firmly replanting its stiletto heel in the luxury footwear business with the eighth floor’s first renovation in 13 years. Now 22,600 square feet, the women’s shoe area at the New York flagship boasts 10 percent more selling space.

While it might not be immediately apparent, the new shoe area is meant to evoke Central Park, with tree trunk tables — both abstract and representational — display fixtures that echo rock formations, and a series of poles that could be interpreted as trees with a little imagination, their leaf-shaped shelves holding shoes.

Along the perimeter of the shoe floor, 15 of Saks’ key partners — those with large established businesses — have been rewarded with shops-in-shop that break from the Central Park theme and feature each brand’s aesthetic and house codes.

“Shoes have always been a critical part of Saks’ business. We’re taking the floor into the future,” said Will Cooper, senior vice president and general merchandise manager of women’s shoes, noting that 2,500 styles are offered. “The shoe floor was part of Saks Fifth Avenue’s Grand Renovation.”

“The renovation of 10022-Shoe is a testament to Saks’ commitment to provide the ultimate luxury shopping experience for our customers,” said Saks chief merchant Tracy Margolies. “We’re proud to offer an unparalleled assortment of luxury brands and emerging designers, as well as exceptional services to create a more personalized and seamless shopping experience. We’re confident that the renovated women’s shoe floor will continue to reflect our dominance in the category.”

The multiyear redevelopment project at the 645,000-square-foot flagship is about 70 percent completed with the cost running above the original $250 million budget, although not by a huge amount, Saks executives have said.

The average price for the shoe floor is $500 to $700, and rises to several thousands of dollars for runway styles and highly embellished pairs decorated with Swarovski crystals, for example.

Cooper expects sport sandals and loafers to be strong sellers this spring. “Sneakers are very important, but as ready-to-wear gets more dressed up, loafers feel fresh,” he said, adding that both flats and heels will appeal to customers. “We haven’t seen loafers for a while. Designers across the broad have focused on comfort. We weren’t talking about comfort in 2007.”

A restaurant at the front of the eighth floor was removed, and covered-up windows overlooking Fifth Avenue were opened, allowing sunlight to stream through. Hanging porcelain sculptures in floral shapes with gold metallic lusters glint in daylight. “Opening up the windows opened up the whole space,” Cooper said.

“In thinking about the redesign, we’ve built tremendous businesses with [key brands],” Cooper said. “The shops-in-shop were an opportunity to expand our assortment and work more closely with our partners. In addition to the shops-in-shop, we can develop new emerging talent.”

Cooper said the shops-in-shop are considered the buildings that surround Central Park, each with its own unique architecture. Chanel‘s was designed by Peter Marino, the architect responsible for the look of the Parisian luxury brand’s stores worldwide.

The center of the floor is devoted to a mix of designers that Saks hopes will provide a sense of discovery for consumers. “It gives us the opportunity to display new collections, whether they’re small or large.”

Ten new collections, including Amina Muaddi, Alexandre Vauthier, By Far, Midnight 00, Staud and Cult Gaia have been added, and are interspersed with more established designers.

Christian Louboutin‘s shop features four wall panels made from the designer’s signature red soles layered like the scales of a fish. Inspired by traditional French gardens, there’s nothing classic about the shop. A teal custom ceramic fountain inspired by the Tethys cave buried in the Palace or Versailles, was created with the Atelier Jean Roger and assembled by an artisan from the atelier.

Other shops-in-shop include Bottega Veneta‘s first in the U.S. devoted to shoes; Balenciaga, Celine, Dior; Fendi; Gianvito Rossi; Givenchy; Gucci; Louis Vuitton; Saint Laurent, Roger Vivier and Valentino. A dedicated area for Jimmy Choo will bow in May. “We allowed brands to come in and personalize their shops,” Cooper said.

“Ease of shopping was important,” added Cooper, citing the express elevator that goes straight from the main floor to eight. “We’ve armed 100 associates with digital selling technology. The new luxury is about ease. When you have 2,500 pairs, they can filter what’s new.”

Leather Spa, which offers repairs such as resoling and shoe fittings, as well as handbag repairs, opened an outpost on the floor.

Saks is celebrating 10022-Shoe’s renovation with a charitable campaign starting on March 16, and benefiting New York-Presbyterian Komansky Children’s Hospital, Bring Change to Mind., and the Society of Memorial Sloan Kettering. The campaign will honor uncommon heroes at each institution, who work to make the city a better place.

The retailer will donate 1,000 pairs of shoes, distributed between the three organizations, and will hold a charitable shopping weekend when 10 percent of women’s shoe sales will be donated to the groups.

Saks also unveiled a new 6,000-square-foot kids department on the flagship’s 10th floor, with more than 100 brands represented, including Burberry, Gucci, Ralph Lauren, Balenciaga, Balmain and Moncler. Mommy and me moments abound, from colorful Lilly Pulitzer dresses to Bari Lynn acrylic clutches to Mini Melissa shoes. Walls painted with clouds give the space a whimsical touch, and papered walls invited children to unleash their inner artist. Gifts include selections from Taschen and Books to Bed, and Jellycat’s soft and quirky stuffed animals.