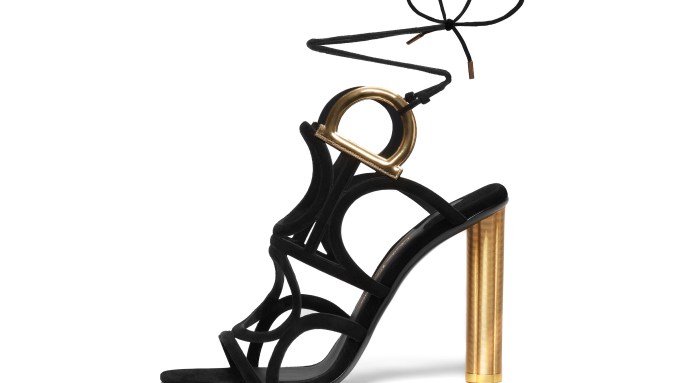 Flipping the idiom around, Eraldo Poletto, chief executive officer of Salvatore Ferragamo, zeroes in on the company’s mission. “We are a lifestyle brand, we continue to maintain the idea of a total look, but at the same time we are restarting from our fundamentals, where we have the most expertise.”

Enter Paul Andrew, who was appointed design director of the women’s footwear category in September last year, shortly after Poletto’s arrival in August.  This was the first time the Florence-based luxury firm tapped an international designer for such a role, marking the company’s commitment to strengthen its core footwear business, which last year accounted for more than 40 percent of total revenues. Andrew’s pre-fall looks hit stores in May and Poletto said “the first feedback both at retail and wholesale is very encouraging.”

“The mission is huge, yet natural and it has energized me creatively,” said the soft-spoken and cordial Andrew, in the first joint interview with the company’s ceo. Outlining his strategy for the brand, the designer said: “I think it’s less relevant to do a collection of products [and rather] more of key items that speak in a novel way, that feel relevant today amidst the noise, that stand out and are perfectly executed. I hope in a steady transformation and I’m not planning a dramatic overhaul.”

Throughout the conversation, Andrew’s admiration for the late Salvatore Ferragamo, who founded his namesake company in 1927, was palpable. The brand in his view stands for “quality, Italian tradition and prestige, it’s inspiring and my job is not to revolutionize it, but to evolve its aesthetics, engaging today’s customer, a new generation of women, the daughter and granddaughter of the Ferragamo customers, a family of customers that share the same codes, buying into the same luxury that is synonymous with the brand across generations.”

Andrew channels Ferragamo, who was dubbed “cobbler to the stars” for his work with Hollywood celebrities of the time and who studied anatomy to perfect his designs. Similarly, Andrew has been “spending time working on the fit and comfort, which was Salvatore Ferragamo’s overarching idea.”

“I reflect on the way people wear shoes. Even now, just looking out the window, I see so many wearing sneakers and they are no longer just specific for sports. Feet have adjusted to different types of fits. The natural collagen on our feet is less than 30 years ago because of the shoes we wear, so I introduced a memory foam padding that allows incredible support and comfort, which has been a dirty word for so long,” he said with a laugh. “But there is nothing less attractive than a woman looking uncomfortable in her shoes.”

Both Andrew and Poletto spoke of  “high-tech and high-craft,” harking back to the company’s storied craftsmanship and state-of-the art production facilities, enhanced by technology. For example, the designer reworked Ferragamo’s “flower heel” created in the Thirties. “When you turn it, it looks like a petal, I brought it to a car factory and had it galvanized. It’s become a key silhouette, not only in shoes but in hardware for bags, belts and eyewear.” Andrew spoke of dyeing suede three times for a special “saturation effect and durability.”

“The Vara [model] is an icon, so how to bring it forward?” he wondered. To meet the challenge, he introduced a technical nylon webbing in the bow with frayed edges, oversizing the detail. “We added a young touch by changing the proportions of the last and vamp and we’ve had a great reaction,” said the designer.

“I feel so lucky and fortunate. It’s all there, it just needed to be tweaked and reconsidered. We inherited an incredible archive, it’s so much fun to work with it.”

To wit, Andrew revisited the brand’s storied F-wedge in feminine ankle-boots or ankle-strapped pumps in suede. “It is so fresh again and we will continue to work with this silhouette. It’s mind-boggling how ahead of his time Salvatore Ferragamo was.”

Andrew is also reworking another recognizable brand logo, the Gancio, in strap sandals. “All the ingredients are there, we are just rethinking them,” he said simply.

Similarly, Andrew said he was reinterpreting Ferragamo’s invention, the sock sandal, created in the Fifties after a trip to Japan, when he saw a geisha in Kyoto wearing socks with her traditional Geta thong footwear. Adapting it for use today, Andrew revisited the style with ankle or knee-high socks in stretch Neoprene used for wetsuits.

Limited by  World War II constrictions, Ferragamo ingeniously worked with raffia, cork or lace, and Andrew is channeling this innovative streak by looking for alternative and exclusive materials, such a unique fabric with a floral motif “with more textures, woven by hand in Naples. However, it wasn’t working, so we opened the loom and pulled out the Lurex threads, which gives it a frayed effect.”

Andrew is also returning color to the brand, which was a staple for Ferragamo, who “loved and appreciated a rainbow [of hues], seen in his 15,000 pairs of archival shoes. Colors influence other categories, too.”

Color is also a priority for Andrew’s own footwear line, which he launched in 2012 and continues to design. In 2014, he was named winner of the CFDA/Vogue Fashion Fund, becoming the first footwear designer to receive the top honor. He worked at Donna Karan for nearly a decade — rising to the role of vice president, design, shoes and accessories. Prior to that, he worked at Calvin Klein, Narciso Rodriguez and Alexander McQueen.

Andrew, who referenced Richard Serra in one of his designs for Ferragamo, shares a passion for the arts with the late designer, who was a pioneer in his association with artists and their works. The Ferragamo family follows in his tracks, supporting the restoration of a number of rooms at the Uffizi museum in Florence, Andrew pointed out.

Speaking shortly after a presentation event in Seoul at Isetan in April, Poletto emphasized the “excitement” surrounding Andrew’s arrival and how he is “extraordinarily in tune” with the brand, blessed with a “great ability to interpret the values of Salvatore Ferragamo, making them more contemporary. Paul admires Salvatore, they share ideas and we immediately shared his vision and strategies. It all came naturally.”

Andrew joined the company at a moment of change, following the exit of creative director Massimiliano Giornetti in March last year, and that of ceo Michele Norsa in August. His successor Poletto opted for a trifecta of designers, tapping Fulvio Rigoni and Guillaume Meilland as women’s ready-to-wear design director and men’s rtw design director, respectively.

Asked about this decision, Poletto said “We must start from our main asset, women’s footwear. Having a dedicated designer was a spontaneous decision, but we are also a lifestyle brand and not only about shoes. We are restarting from our core expertise.” A designer who understands how “shoes are such as sensual and intimate object that is so close to a woman’s body” is key, he pointed out.

He underscored that the company’s “top priority is shoes,” followed by leather goods, where “there is a lot to do for men and women,” but he was adamant in maintaining the concept of the brand’s total look. “We are also going back to something that characterizes us a lot — textiles, but in a more modern way.” Product, innovation and creativity are at the center of the strategy, he remarked.

As reported, last year revenues at the publicly listed company were up 1 percent to 1.44 billion euros, or $1.58 billion. Sales in the last quarter accelerated, gaining 4 percent. The acceleration continued in 2017, with like-for-like sales in the first 11 weeks of the year showing positive signs. “We expect low, single-digit growth in like-for-like in 2017,” said Poletto in March. Sales of footwear grew 1.7 percent to 611.1 million euros, or $672.2 million.

Christopher Kane, Prabal Gurung on How They Get Ready for the Met Gala