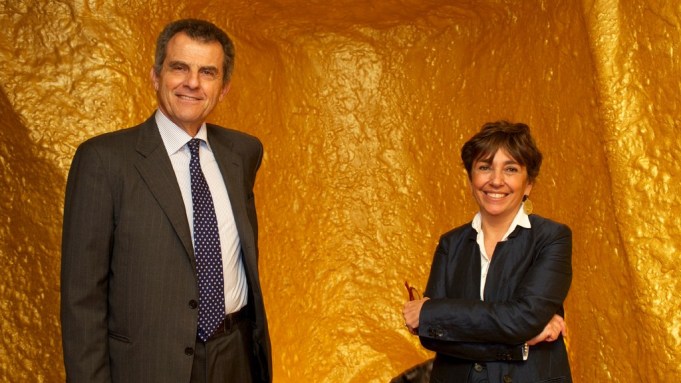 FLORENCE — The Salvatore Ferragamo Museum here has just unveiled its latest exhibition, “The Amazing Shoemaker — Fairy Tales and Legends about Shoes and Shoemakers,” which will run until March 31, 2014.

“It’s the first time the museum takes on such an important and intricate subject,” said Salvatore Ferragamo chairman Ferruccio Ferragamo, referring to the theme chosen by curators Stefania Ricci, Sergio Risaliti and Luca Scarlini for the exhibition. It revolves around the key and magical role of shoes in fairy tales, myths and legends from ancient times to the present day. Of course, a significant space is dedicated to the story of Salvatore Ferragamo.

“When they asked me to do this work, I was scared because I usually don’t do books based on real people. I was scared about the realism,” said Espinosa, whose father was a cobbler. “But when I read Salvatore Ferragamo’s story I realized it’s a myth, and it turned out to be easier to put together than I thought.”

Espinosa revealed that “before working on this project I just knew about the shoes, which I’ve never bought due to the price range — I’m an artist. But reading the story, I discovered he was an artist, a real creator.”

“Salvatore Ferragamo was born just 30 kilometers [19 miles] from my village, and we share the same roots in the antique culture of our region, the Campania,” said artist Mimmo Paladino, who created various works for the exhibition, including an installation of 40 aluminum shoes, a two-meter bronze sculpture and 10 drawings, which served as inspiration for a video he directed.

A highlight of the exhibition is “White Shoe,” an animated short film directed by famed storyboard artist Mauro Borrelli. The movie takes inspiration from an episode in the life of the young Salvatore Ferragamo, who created in one night a pair of white shoes for his sister’s first communion.

“I was honored to play this role, and I was amazed by how creative and talented Mr. Ferragamo was,” said Reese Gonzales, who played the part of Salvatore Ferragamo.

California-based Gonzales, age 11, was making his big-screen debut. “As Mr. Ferragamo always dreamt about being a shoemaker, I’m dreaming of being an actor,” he said.

At the opening cocktail party for the exhibit, Salvatore Ferragamo’s current creative director, Massimiliano Giornetti, said the show fits in with the present mood. “Currently there is a lot of buzz around shoes,” he said. “Until a few seasons ago, it was all about the “It” bags, which have recently been replaced by shoes.”

Giornetti, who also said that he always starts designing his collections from footwear, revealed that in addition to the main resort line, he is designing three resort capsules, dedicated to Capri, Monte Carlo and Honolulu, respectively. “I think these three locations represent the key destinations in the world,” he said. “Capri embodies the brand’s essence; Monte Carlo is an extremely international place, and there we will organize a big event in collaboration with the local yacht club; Honolulu is the Chinese people’s favorite beach-resort destination,” Giornetti explained.