Santoni is unveiling an exclusive women’s capsule collection during Milan Fashion Week, which runs from Sept. 22 to 28.

For the new project, the Italian luxury footwear brand tapped shoe designer Andrea Renieri, who is expected to collaborate with Santoni for several seasons.

An industrial design graduate of Milan’s Politecnico, Renieri cut his teeth at Bally before working at Costume National for seven years, and then at Dolce & Gabbana and Fendi, where he joined the men’s leather design team. In 2014, the designer made a comeback to the women’s field, kicking off a successful six-year collaboration with Marco de Vincenzo, whom he met at Fendi, where de Vincenzo is still head designer of the leather goods division.

“Andrea and I met through a common friend and we immediately clicked. We both share a deep love for beauty and excellence, which are the key features of the Santoni brand, that I don’t see as a fashion-oriented project, but as a luxury label offering modern, elegant, timeless products that are designed to last,” said Giuseppe Santoni, chief executive officer of the footwear company that his father Andrea Santoni established in 1975 in the Marche region. “I think that Andrea [Renieri] has the right qualities, skills and vision to further develop our cultivated and contemporary idea of femininity, in collaboration with our highly talented artisans, who have the ability to create anything we ask them.”

Renieri will be dedicated to the design and development of the women’s capsule, which will represent the top-of-the-range of Santoni’s women’s collections, which will continue to be created by an in-house dedicated design team coordinated by Giuseppe Santoni himself.

Featuring prices 30 percent higher than the rest of the collection, the capsule designed by Renieri “will be instrumental to highlight our brand’s positioning in the luxury, exclusive segment of the footwear market,” explained Santoni, revealing that Renieri is already working on the fall 2021 capsule collection.

Established as a men’s footwear label, Santoni is investing a lot in the development of its women’s division, which accounts for 35 percent of the company’s total business. “When we started with the women’s line, our products featured shapes and details closer to the men’s range, but now I think that the women’s line has found its own very clear identity, which will be amplified by the capsules designed by Andrea,” Santoni said. “I think that since he started collaborating with us, Andrea has been able to immerse himself in our world, finding a very personal interpretation of it, while sticking to our own DNA.” 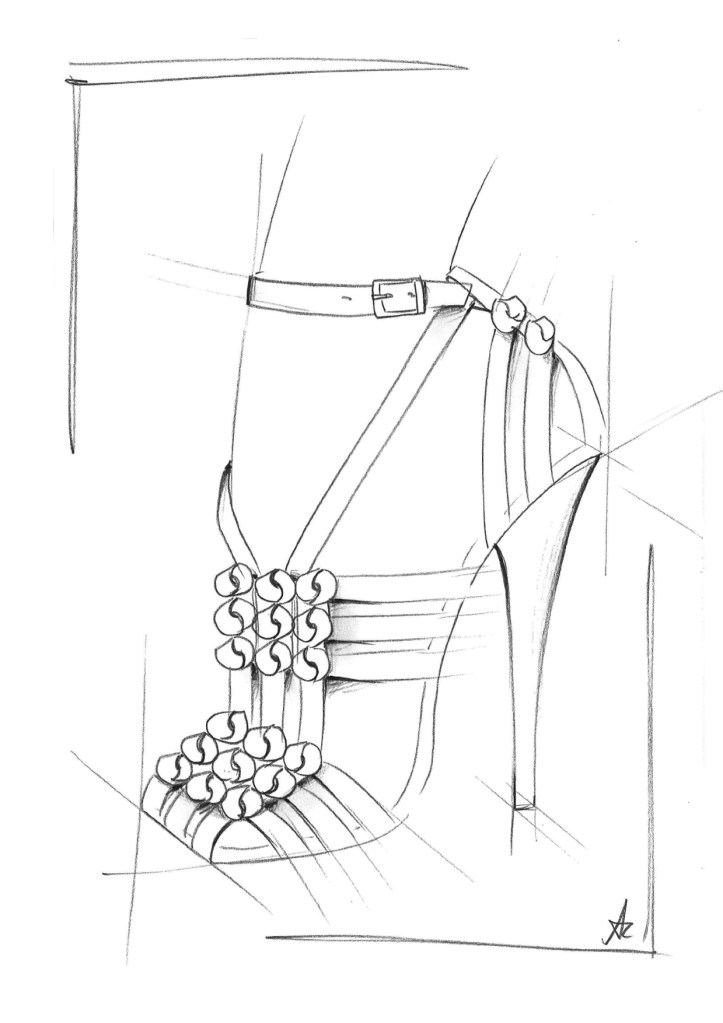 A sketch from the Santoni spring 2021 capsule designed by Andrea Renieri.  Courtesy of Santoni

Expecting at the end of 2020 to post a sales decrease of between 15 and 25 percent compared to 2019, when the company registered revenues of 83 million euros — “this will be the first in our history that we are closing with a drop” — Santoni, like the majority of luxury brands, is suffering from a lack of international visitors in the cities where it operates flagships, including Milan, Paris, London and New York.

“Local retailers are performing better and we are compensating parts of the lost sales in our stores with the e-commerce, which we relaunched last year with an omnichannel strategy,” Santoni said, revealing that the directly operated online store accounts for 5 percent of the company’s total business. A wholesale-focused brand, Santoni generates 20 percent of its revenues through its retail network, which is expanding in 2021 with the opening of a flagship in Milan’s Galleria Vittorio Emanuele II luxury shopping arcade, as well as with four stores in China, in Beijing, Shanghai, Hangzhou and Chengdu.

“China currently accounts only for 5 percent of our business, which means we have huge potential to grow in that market,” said Santoni, revealing the brand will launch a store on Tmall in November.

Santoni generates 20 percent of its business in the U.S., where in May it introduced the omnichannel strategy, and the rest of its sales are mainly finalized across Europe and Russia. “Considered the overall complicated scenario, sales are going pretty well in Germany and Holland, where we are seeing a small growth,” the entrepreneur said.