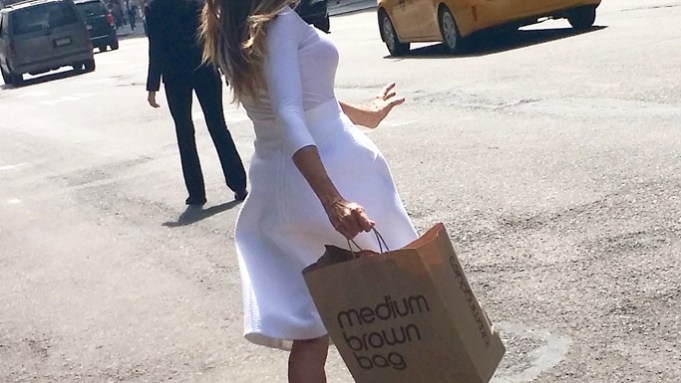 Speaking about the new retailing venture exclusively to WWD, Parker said, “We are a New York brand and since we launched just over a year-and-a-half ago people have been asking us, ‘I’m coming to New York, where can I buy your shoes?’ Now to be able to point them in the direction of 59th and Lex is thrilling.”

Parker, who is based in New York, said the Bloomingdale’s deal affords her the opportunity to check in with the brand’s consumers and affiliated sales staff on a more frequent basis.

“I don’t think people realize how small we are, it’s just me and George — I’m in every meeting, every conversation, every sales meeting, every market week, every sample comes through my hands — having the change now to drop by a New York store whenever I can instead of having to travel is a huge opportunity.”

The actress, who is currently developing a pilot with HBO, said she plans to take advantage of the store’s proximity to her home base. “I’ll speak to people on the sales floor, talk about fit talk, about comfort — all really important things to the brand.”

On Monday, initial excitement for the partnership was spurred when a crowd of fans and passersby assembled to watch Parker pose for promotional images outside the 59th Street flagship. Paparazzi flocked en masse as well, snapping shots of the actress as she preened atop a taxicab and, later, on top of the store’s famed Art Deco marquee. The resulting tabloid articles claimed that  Parker’s shoot was further proof that a third “Sex and the City” movie is on its way.

Parker said this couldn’t be farther from the truth. She exclaimed: “The fact that people read into it definitely took us by complete surprise — there is just nothing to say on the topic [of “Sex and the City 3”], and if there were something to say if we would share, but right now, there is nothing to say at all.”