Serena Williams and Stuart Weitzman have teamed up again on an advertising campaign, but this time Williams shares the limelight with a little helper. The tennis star poses in photos for the brand’s spring 2021 collection alongside her daughter Alexis “Olympia” Ohanian Jr., age 3, who is shown wearing some of the brand’s new styles that, while now oversized, may fit in a few years’ time. It is the first fashion campaign that the mother-daughter duo has been featured in together.

The new photos of the Williams women were taken by Ethan James Green with styling by Gabriella Karefa-Johnson.

Speaking with WWD this morning, Olympia by her side, Williams said that “it’s a special campaign. I just felt like it was an opportunity because Olympia and I have been spending so much time together. Olympia is trying on my shoes all the time, it’s so fun — she loves to try them on and we play in them. I have a red pair of Stuart Weitzman shoes that she loves and there is the new Lyla style with a toe ring in leopard print that’s one of her favorites.”

While some of those designs may not be totally practical for the COVID-19 stay-at-home lifestyle, Williams says she has been trying to rotate between different styles during lockdown but is “definitely looking forward to dressing up again.” 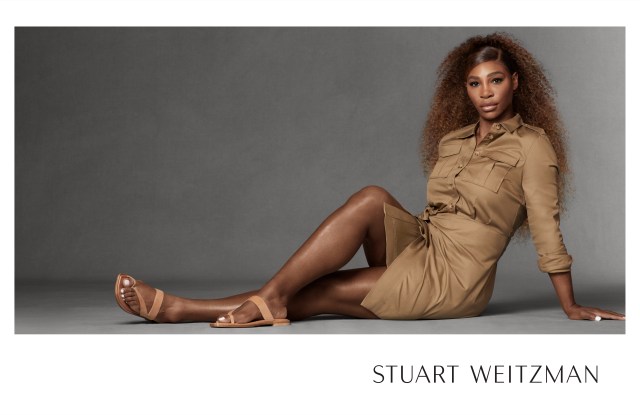 Spending more time at home and less time on the grueling travel schedule required of WTA players has afforded Williams more time to spend with her daughter. “I just feel like we have gotten closer; we spend time together, we play together, we have a little schedule now. I love being able to play with her and just make up games. When I grew up, I had such a great imagination and so I’ve been teaching her about imagination and making up things — it’s very fun,” Williams said.

Like most parents, Williams and her husband Alexis Ohanian are facing difficult decisions relating to in-person learning while also juggling a demanding job. “Lately my schedule has been still revolving around training, but I’m also just trying to decide if Olympia is going to go to school. There are so many decisions with school and COVID-19. But mostly I train and have been in a little bit of a bubble. My training group is a bubble — we are just hanging around each other and are just forever in this state,” she said.

A lot of Williams’ newfound free time has been dedicated toward revamping her fashion line Serena, which launched in 2018. She also confers with her sister Venus, whose own fashion line Eleven by Venus Williams has been steadily growing since its 2007 founding. “I’m working really hard on my other company, the Serena fashion brand. We have a couple new releases that we’re working on — we are revamping it and working on new photo shoots, which in the COVID-19 world is a little different. Venus shows me her designs and wants my opinion and I really value that. Her designs are so successful.”

As for summer plans, Williams says that she “doesn’t see a world” in which the Olympics will not go on as planned, particularly with the roll-out of vaccines. “It would be wild,” she said.