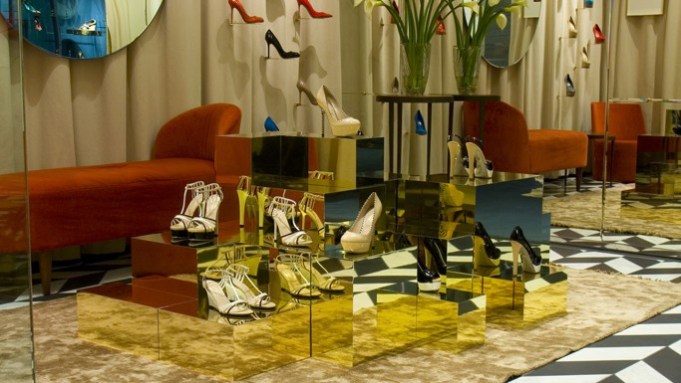 Sergio Rossi is taking a big step forward in the U.S. with the American debut of its new retail concept this month at The Forum Shops at Caesars in Las Vegas.

Underpenetrated in the U.S. compared with its competitors Jimmy Choo, Manolo Blahnik and Christian Louboutin, Sergio Rossi views the 1,381-square-foot store as the beginning of a serious effort to capture market share in the luxury footwear segment here. On June 1, the brand is also unveiling a refurbishment of its store at Bal Harbour, which it bought back from a franchisee last year and is the only other store Sergio Rossi directly owns in the country.

“The [U.S.] sales of the brand are not connected with the potential of the market. I have a stronger presence in all the other continents,” said Christophe Mélard, president and chief executive officer of Sergio Rossi, which is owned by Kering, formerly called PPR. “I have a leadership position in Europe and in Asia, and I have no doubt that I can do much more in America, but it will be done by step-by-step sustainable and profitable development.”

The Sergio Rossi store at The Forum Shops introduces American consumers to a retail concept that was launched in Rome in 2010. Developed with London-based interior design studio Studioilse, it has a “front stage,” where shoes are displayed in multilevel, brightly polished brass cubes, and there is black-and-white herringbone-patterned marble flooring, a red velvet chaise longue and flesh-toned curtains covering the walls, and a “back stage” featuring a darker, more intimate setting with velvet curtains wrapping the walls, a velvet sofa and a plush carpet, all in shades of blue.

Mélard likened the store to an “Italian apartment that presents the Italian lifestyle,” adding that the “back stage” is akin to a woman’s boudoir that’s bathed in velvet to give it “a real sense of luxury.”

The Forum Shops appealed to Sergio Rossi because of the sales productivity of its stores and the exposure a brand can achieve there. Although Mélard said he is being cautious about forecasting sales in Las Vegas because “we have such a small presence in America,” Forum Shops stores can generate more than $1,400 per square foot in annual sales. Based on that figure, Sergio Rossi could reach nearly $2 million in yearly revenues at the shopping center.

“Las Vegas represents an essential step for our U.S. retail strategy. It is a market where the demand for luxury accessories — especially footwear — remains robust,” said Tim Crout, president of Sergio Rossi Americas, who noted the store is carrying women’s, leather goods, bridal and men’s.

Asked about the possibility of future stores in the U.S., Mélard mentioned the brand would consider the important areas for luxury retail, but that it doesn’t have a long checklist of spots where it expects to locate. “I want to take care to grow gradually and keep in mind that, being a top-end luxury brand, we need to stick to a limited number of direct-operated stores in America,” he said. “We will be observing and talking about the opportunity for expansion in New York. I hope in the coming years to be in Beverly Hills, but we will also be working closely with our key historical partners, the department stores in America. We are in close relationships with Saks, with Barneys and with Neiman Marcus. We have a very exciting project with Bergdorf Goodman.”

Mélard suggested Sergio Rossi’s retail performance worldwide, where it has 84 stores, 30 of which are operated by franchisees, provides a solid basis for its retail spread. “The trend all over the world is quite positive, both in terms of absolute and relative figures. We are growing in all regions and after a year of growth in 2012. It is very encouraging to observe,” he said.

Sergio Rossi’s dive into the U.S. comes as its creative management is transitioning. Earlier this year, the brand parted ways with Francesco Russo, who was its creative director since 2008. “We arrived at a certain stage where both sides were thinking about the future. The future of the brand is to speed its visibility,” said Mélard. “The brand needs to be consistent all over the world, but more and more, it needs to pay attention to local needs in terms of slight adaptations. I’m speaking about colors. I’m speaking about fabrics.”

Mélard emphasized that Sergio Rossi hasn’t exactly replaced Russo, but has restructured how it handles its creative and marketing functions to have them interact more closely. Angelo Ruggeri has come on board as its collections and design director responsible for the women’s, men’s and handbags collections. He reports to Susanna Nicoletti, chief marketing officer of Sergio Rossi.

“When we are developing a collection, immediately we think about the visual merchandising in the store, how we will promote the star product of the season to the press, how we communicate about this product online,” said Mélard. “It is not just designing collections, it is about how to promote collections.”