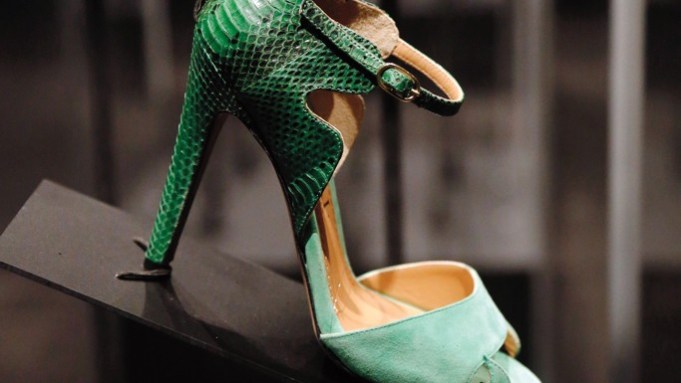 NEW YORK — Valerie Steele, director and chief curator of the The Museum at The Fashion Institute of Technology, was on her third pair of shoes before Thursday’s fete for the new “Shoe Obsession” exhibition and corresponding book was even halfway over.

After slipping out of the black vertiginous Noritaka Tatehana wedges — made famous by Lady Gaga and standing at eight inches — Steele changed into a pair of more modest 5-inch black platform Nicholas Kirkwood sandals to welcome guests to the show, which will run through April 18.

For Steele, who cocurated the show with associate curator of accessories Colleen Hill, the obsession with shoes has “ratcheted up to a new level.” Hill found that the average American woman has two times the amount of shoes she did a decade ago.

“During ‘Sex and the City,’ there were a handful of fanatics who knew about Manolo [Blahnik], but there’s been exponential democratization [here.] They now know Nicholas Kirkwood and Charlotte Olympia — and people are buying them,” Steele said. “Accessories are no longer accessories. They are the central picture.”

Castillo, who had two pairs of shoes featured, agreed. He called shoes “the” object of desire, noting that styles labeled “sky-high” 20 years ago are now thought of as average heel height.

“What was considered unwearable and impractical by many people is now a typical part of the selection of shoes at most retailers,” Castillo said, citing technology as allowing for the evolution of unique and artistic footwear that is still often wearable.

Birman, who had three pairs of shoes on exhibit, said the past four years have brought a tremendous change to the footwear industry.