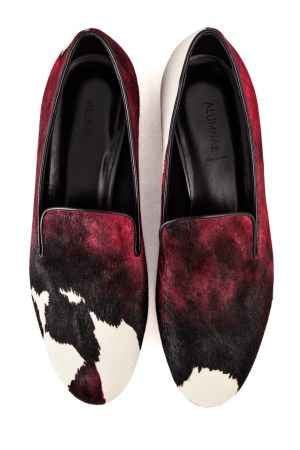 A Footwear Icon Is Making a Comeback: Scholl’s Wooden Clog

Sigerson founded the Sigerson Morrison label with Miranda Morrison in 1991, and the two quickly attracted a cult following. In an effort to expand, the partners took on big-business backer Marc Fisher in 2006 — a deal that led to the duo parting ways with the company in 2011.

But the Sigerson Morrison brand — known for the rubber, kitten-heel flip-flops that make it the “It” label of the early Aughts — is a ways different from Alumnae’s earthier vibe. While Sigerson Morrison lent itself to bright colors and spiky shapes, Alumnae is largely informed by textured neutrals and Italian craftsmanship. The brand’s first collection, resort 2016, includes an array of flat styles — both closed-toe and sandal designs — each accentuated with artisanal flourishes like hand-tied knotted leather mesh. The label’s mantra, “remember the woman, not what she wore,” underlines its mission of creating shoes that offer a unique, understated nature.

Speaking of the then-and-now contrast that defines each label, Sigerson said that since starting Sigerson Morrison, footwear has become “a lot more cleaned up, not nearly as sky-high with crazy platforms and bells and whistles. I think people want something more sensible and are looking at their closet and say, ‘Do I need 50 pairs of shoes?’”

That reassessment of the market has spawned designs like spotted calf-hair smoking slippers, asymmetrically laced, ankle-high oxfords, and a gamut of impressionable gladiator styles. Product will retail between $395 and $650 per pair — a price point that Sigerson and Axelson-Chidsey call, “wide open.”

With these offerings Alumnae, a name that for Axelson-Chidsey denotes “the sense of an accomplished woman, something with a little bit of weight to it and a little substance,” is after the creative class. “Our ideal girl is probably a design professional — someone who is involved in industrial design like Lindsey Adelman or someone like that who is a tastemaker but not a fashion hound,” said Sigerson.

The label’s inaugural offerings were previewed to buyers earlier this summer at The News showroom, but will officially open for market orders in September for spring season deliveries. Stella Ishii, president and founder of The News, projects that the label is poised for $1 million in sales in its first year. Ideal retail partners, she said, include specialty boutiques and forward-thinking department stores.