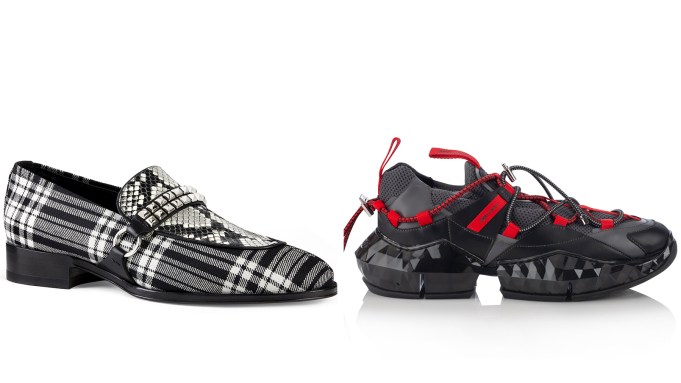 Sneakers are not going away any time soon — at least not judging by Milan. However, brands were inventive, decorating these must-haves with glitter, polished, formal or retro touches, while they also played up more formal designs to respond to a shift in market trends.

Jimmy Choo‘s creative director Sandra Choi was inspired by the 1969 moon landing, the pursuit of new frontiers and Texas culture seen through the eyes of a Sixties Japanese rock band. The result was a colorful, fantastical collection featuring sneakers with angular chunky soles that recalled moon rocks, others that shone with silver glitter like space dust, and small blue studs like gemstones adorning the heels of elegant lace-up shoes. Accessories included silver foil backpacks, and red, white and blue small leather accessories. The colors of the American flag also flashed from the tassels of slip-on loafers.

Prada-owned Church’s both played up its British heritage and flexed its athletic muscles launching new Ch873 retro runners with a Union Jack motif at the heel and adding a sneaker to its archive-inspired Shanghai line. The Northampton-based brand also debuted a range of six formal styles in distinctive grained St. James leather including novel double-buckle loafers.

Cuban heels at Giuseppe Zanotti came similarly stacked to 25 centimeters high. The season’s threefold inspiration, Cuban meets British meets “Miami Vice,” played out with tartans, animal prints and embossed croc panels on mixed material dress shoes. This renewal of his label’s formal category is the designer’s response to current shifts in the market. “Sneakers are part of our culture, but I don’t want to completely forget about tradition and put it in the garbage,” he said. There were also new sneakers, a less intense skater style with textured soles like the scales of a sea urchin.

At Santoni, the brand’s collection of classics got a contemporary spin with slick hand-colored shoes and ankle boots with bright-orange, non-slip rubber patches on the soles. The Italian label also updated its sneaker collection with retro style runners that featured wooden veneer detailing on the soles. “I definitely see more formal wear coming back but sneakers are still a big part of our group,” said chief executive officer Giuseppe Santoni.

Inspired by traditional American workwear, Barbanera offered its signature take on the classic engineer boot, revisited in super-supple luxury leathers. The brand also showcased variations of its iconic cowboy boots, peppered with contrasting graphic intarsia, as well as eye-catching David Bowie-inspired Chelsea boots with the elastic side band in the form of a lightning bolt.