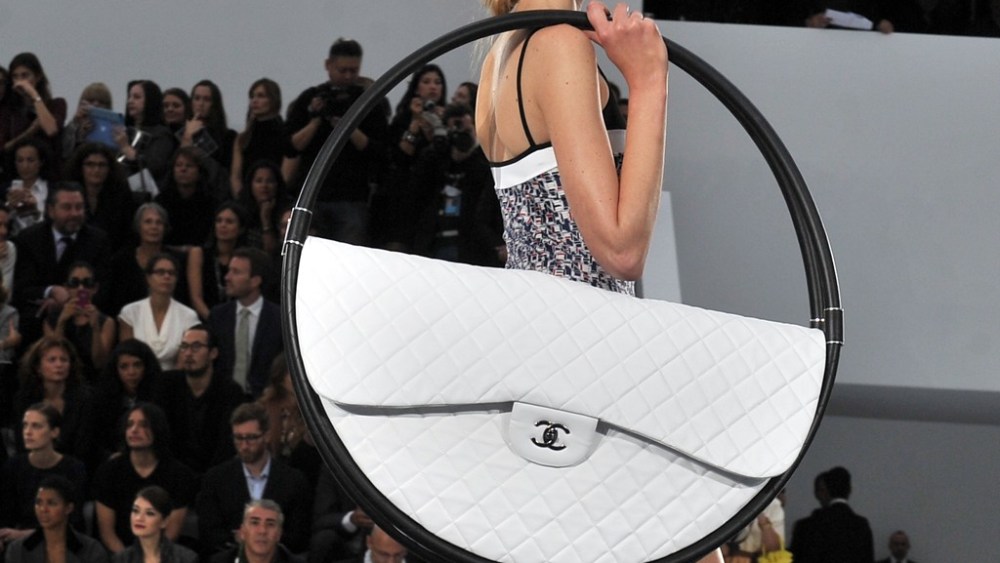 The Twitter and Instagram feeds of anyone who remotely follows fashion were inundated with images of Celine’s fur footwear and Chanel’s hula-hoop bag Sept. 30 and Oct. 2 — the respective days of each brand’s spring runway show during Paris Fashion Week.

Social media is not only starting to dictate trends, it also influenced the accessories that buyers purchased for spring, according to retailers from Fivestory, Holt Renfrew and Kirna Zabête. And if consumers bite — which engagement across the social platforms shows is likely — the upcoming season will bring loads of furry feet thanks to Celine; hula-hoop-style bags à la Chanel, and aspiring Playboy Bunny wannabes chez Maison Michel.

Instagram is even becoming a powerful selling tool for retailers.

Claire Distenfeld, owner of six-month-old Fivestory on the Upper East Side in New York City, calls Instagram “far and beyond a selling tool.”

She cites a resurgence in the classic Birkenstock silhouette for the season, and while she didn’t order any of Celine’s fur styles, Distenfeld did buy Giambattista Valli’s subtler black version of the flat sandal with rounded studs bordering the perimeter of the sole (which also came in gold). Even though it will be several months before they arrive at the store, Distenfeld has already presold six pairs of $850 sandals via Instagram.

“Birkenstocks are making a total comeback,” read her caption on Instagram alongside Valli’s reinterpretation of the German brand’s classic double-strap sandals, which gained popularity in the Sixties.

Distenfeld thinks it’s mandatory for any buyer to be active on the social platform. She recalls the response her photo of the Giambattista Valli shoes garnered. “I put them up and it was nuts. My sales staff called me in Paris and said, ‘What are these Birkenstocks customers are calling about?’ It’s obvious to me that people are going to wear them,” Distenfeld said. “I always sell a ridiculous amount of product on Instagram and it doesn’t stop at jewelry or $850 shoes. It can be Balmain or big things that you don’t put your credit card on the computer to buy but you call the store and order over the phone.”

She compared “liking” photos on Instagram to consumers making impulse buys. To her, a “like” on the medium is parallel to a shopper seeing something in a store and saying, “I want that. I need that.”

“The furkenstocks went above and beyond my wildest imagination, I could not have loved them more. When I think back on the entire spring season across the board, that is the one item that really sticks in my head as cheeky, new, innovative and fun and comfortable,” Buccini told WWD. “We ended up not getting the all-fur pump — we really debated it. But at the end of the day, you really are going to wear fur Birkenstocks over fur pumps.”

Buccini deemed shoes the “It” accessory for spring, from the flat fur sandals at Celine — the store ordered them in three colors (red, black and baby blue) and they will retail for $895 — to Joseph Altuzarra’s $1,600 nude-colored, knee-high gladiator boots (and although they won’t be carried at this store, Barneys New York will carry a $2,715 version).

“It’s such a strong shoe season. I don’t feel like the jewelry was really strong,” Buccini said.

Seeing photos of Tom Ford’s knee-high gladiator boots online sent seven of Holt Renfrew’s customers into such a frenzy that they called the store making inquiries as to how they could preorder the $3,800 shoes, according to Holt Renfrew’s vice president of fashion direction, Barbara Atkin.

Of the Celine fur slides, Atkin said, “We had to buy them because when you have that kind of reaction from customers worldwide, it would be a mistake for the retailers to leave it out.”

She noted that the obsession with fur was fueled by the black-and-white mink coat seen at Prada in Milan, which she anticipates will be a must-have item. “We started looking at fur as a seasonless thing. We started tracking it; our eyes were peeled on fur. Our buyer thought that I was insane,” she said.

Rather than dictating trends, Atkin believes social media supports them. She explained that before fashion week even starts, her team puts together a tightly edited document of the direction and strategy of the retailer’s projected buys. But now, the buying process is starting to evolve because of consumers’ accessibility to the shows immediately after they happen — and even as they are happening, thanks to Twitter, Instagram and Facebook.

“Runway is so much about the ‘right now,’ wanting [that item] immediately and the fact that everyone sees things online at the same time, we have to listen to that voice. It actually positions a store in a really important way because if we can see critical mass through Instagram, then we know the direction our customer wants to go in,” Atkin said.

She goes so far as to call the consumer and retailer partners. The customer has become a voice that helps in the decision-making process when stores like Holt Renfrew go into market to finalize buys. For the first time, Atkin is letting consumers make judgment calls in the moment — decisions historically left to members of the business.

Referring back to Ford’s nearly $4,000 boot, Atkin pointed out the retailer wouldn’t ordinarily buy a lot of an item like that. But she said the consumer response after discovering the boots online and via social media “gave us confidence in buying that shoe” — so much confidence that the store will sell them in both black and nude.

She also cited Marc Jacobs’ livestream of his show as “changing the silhouette of footwear” in seven minutes. His declaration that flat, pointy shoes are the style of the moment was a strong one, and Atkin spotted women in London, Milan and Paris all taking Jacobs’ lead.

“We used to sell a million ballerinas, now you’re going to buy that pointy flat or a smoking slipper. The classic ballerina — it’s there but it’s not as of the moment. That’s an example of what social media can do,” she said.

Another item that Fivestory’s Distenfeld, Kirna Zabête’s Buccini and Holt Renfrew’s Atkin were in unison about was Maison Michel’s bunny- and cat-ear headbands. The brand is a hot seller at all three retailers; Distenfeld said the $355 lace cat ears have sold out and there is just one pair left of a $265 gray felt style.

Then there was Chanel’s hula-hoop bag. Printemps purchased the enormous runway style, as well as a more modest 28 centimeter version. The retailer’s chief merchandiser of accessories, Elisabeth Miquel, described the bag as part of a trend she’s coined “the new normal” — meaning that a designer takes a very basic item — like the classic 2.55 Chanel bag or a flat, strappy sandal, in the case of Celine — and reinvents it by altering the size or adding fur to make it crazy and over the top.

Miquel added that the Paris retailer has also bought the Celine fur shoes.

Barneys New York senior fashion director Tomoko Ogura confirmed that the department store purchased the Celine fur slides as well, in black and baby blue. But it’s the knee-high gladiator’s strong emergence on runways — and social feeds — that the store projects will resonate with consumers. The store bought styles from Altuzarra, Proenza Schouler and Alexander Wang.

Despite Barneys’ adoption of such novelty trends, Ogura stressed that classics will always be a mainstay at the department store.

“We like to have the thing that draws attention, whether it’s neon or fur or an item that will draw the customer to the display area, but at the end of the day the volume driver is the [Proenza Schouler] PS1 or the [Alexander Wang] Rocco bag,” said Ogura. “It’s nice to have that [novelty] even though the customer may buy the black tote.”