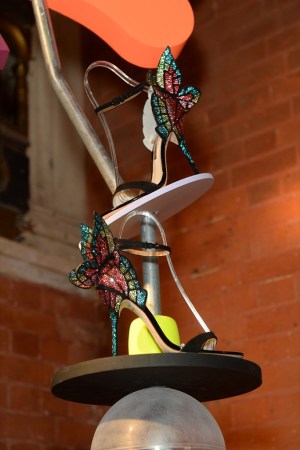 Sophia Webster’s Freak Like Me collection was a carnival of delights presented in an old chapel near Piccadilly Circus. Inspirations were variously old No Doubt albums from Gwen Stefani’s Nineties ska era, Victor Vasarely’s optical-illusion artwork and Cirque du Soleil or “Cirque de Sophia,” as the designer put it.

Set designer Shona Heath created a giant carousel with models wearing costumes inspired by a Bauhaus ballet while other installations featured elements of nearby Piccadilly Circus ranging from giant pigeons to a new take on the Eros statue, incorporating those trademark butterfly wings.

More From the London Collections Fall 2015 >>