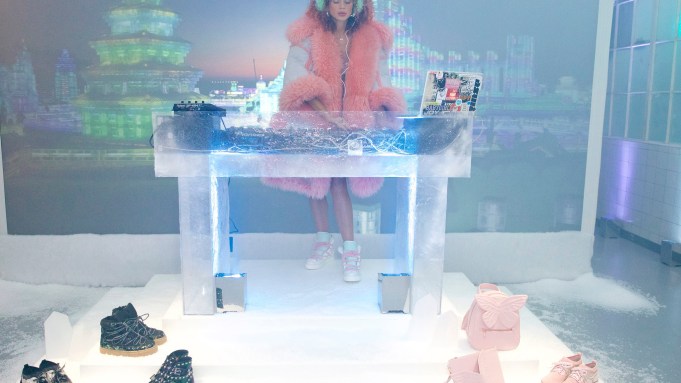 LONDON — Sophia Webster was inspired by tales of Ice Queens for fall and she translated her inspiration in the most literal way there is, transforming Soho’s Vinyl Factory into her own version of Narnia, complete with artificial snow, icebergs, fairy lights and white fur galore.

The result was an enchanting collection that brought a sense of joy and innocence, reminiscent of one’s childhood.

“I’ve got a little girl so we have ‘Frozen’ playing a lot in our house. I also found out about this ice festival in China called Harbin festival; they make a village out of ice and they light it up in multicolored lights. Funnily the main square there is called Sophia Square,” said Webster, explaining why she chose Ice Queen as her muse of the season.

The inspiration was translated into oversize crystals, fur trims, velvet fabrics and an icy palette of pale pink, silver and white; an unexpected choice for the designer, who is known for her love of neons.

“As a brand known for color for some time, I’ve wanted to use a more minimalist backdrop and the snowy landscape was the perfect scenario.” added Webster. “It’s unexpected territory for me to showcase products against white, but visualizing this gave me a new perspective.”

Among the highlights was a pair of thigh-high crystal boots which were embellished with multicolored crystals by hand and a pair of pink velvet pumps with diamanté stones in the shape of a crown, that brought “Frozen’s” Queen Anna to mind.

Webster said that the brand’s success on the red carpet got her more interested in using crystals; “I love the way they reflect on camera, so it’s something I’ve been thinking about a lot.”

A year after launching handbags, Webster updated her key bag styles to fit her vision for fall. A cross-body bag with flamingo-shaped hardware was re-created using white fur; a butterfly-appliquéd backpack was done in a frosty pink, while the brand’s crystal-encrusted box clutches — a best-seller in the range — fit right into the snowy landscape.