On Nov. 28, the company is launching a crowdfunding on Kickstarter to make the project happen.

MILAN — The appetite for sneakers does not appear to be waning, with customers spending around $192 for the category in 2019, 39 percent more than in the previous year, according to fashion search platform Lyst’s “Year in Fashion” research.

Taking advantage of the category’s global resonance, footwear start-up Acbc is launching on Thursday a fund-raiser through Kickstarter with which it aims to build a community and launch what’s billed as “the world’s most sustainable shoe.” Concurrently, a $5 million capital increase bringing in additional backers will allow the company to invest in marketing, workforce and enhance its direct-to-consumer approach.

It’s a comeback to the popular crowdfunding platform for Acbc, which went direct-to-consumer with a Kickstarter campaign in 2016 that raised $700,000 and allowed the company to produce the patented modular sneaker they’ve become known for. The shoes are engineered with a zipper system that ties together the sole, available in 10 variations, with around 100 upper parts, also tapping into the customization trend. The concept has generated hype and provided Acbc with cobranded collaborations with Emporio Armani’s EA7 line and Moschino.

Since cofounders Gio Giacobbe and Edoardo Iannuzzi, who hold the chief executive officer and creative director roles, respectively, have established the company, two additional rounds of investments have followed. The first took place in November 2017 when the company moved to Italy from the U.K. and Compagnia Digitale Italiana, the main shareholder of Triboo Digitale, an Italian consultancy and tech-enabler that spearheads its clients’ digitalization, joined Acbc. In April the second round helped the footwear firm to open 22 doors, among directly operated and franchises, in Europe and China.

Through the latest Kickstarter fundraiser, Acbc’s aim is to take to the production line a modular sneaker with the lowest environmental footprint. During a conversation at the company’s headquarters in Milan, Giacobbe and Iannuzzi explained that the Made2Share sneaker’s production releases 9 kilograms and 4.5 kilograms of carbon dioxide for the sole, and each skin, or upper part, respectively. According to data released by the Massachusetts Institute of Technology, each individual usually purchases three pairs of shoes each year, producing 40.5 kilograms of carbon dioxide emissions, which compares to 22.5 kilograms for an Acbc’s sustainable outsole and three skins. 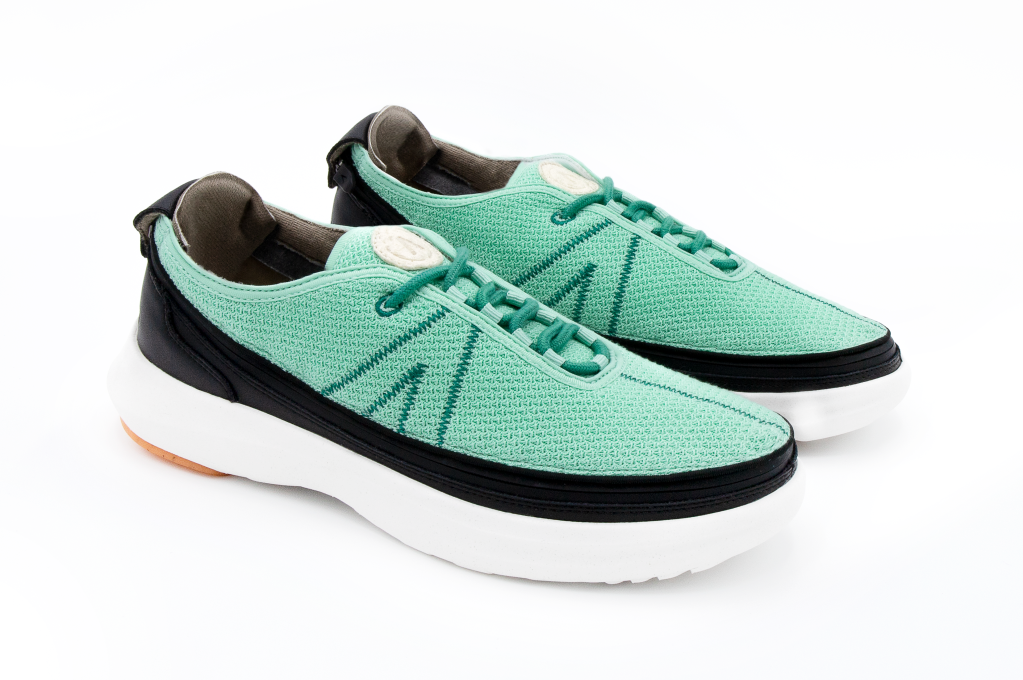 Acbc’s sustainable sneakers boast an outsole made of the trademark Bloom Algae Foam material, an insole crafted from cork, and comes with skins available in a range of eco-friendly materials, including Tencel, Pignatex, derived from pineapple leaves, and Coronet’s Bioveg, a synthetic leather that combines 20 percent recycled PET with 80 percent bio-polyols derived from plants.

“Our vision for the future is to create a company and a label that can be the most sustainable possible, although at the same time to be able to offer product in line with global trends in terms of design. Today, but even in 2017, it would be crazy to launch a company that’s not sustainable,” said Giacobbe.

The shoes will be priced at 180 euros for the one-sole-three-skins pack, slightly above Acbc’s traditional price point of 120 euros and while the two ranges will coexist for a while, the company plans to shift to the eco-friendly solution almost entirely in six months.

Kickstarter was the place of choice to go direct-to-consumer, the cofounders explained. “It’s a platform where we think we can find the right target of customers, sensitive to innovation and to the value proposition we offer,” noted Giacobbe, adding it will also allow to keep prices accessible.

“We were born on Kickstarter and going back there, claiming to be 100 percent sustainable is a great story — to be continued,” said Giacobbe. Iannuzzi added the Made2Share shoes can boast not only sustainable materials and processes but also the “‘shared-sole’ technology,” he noted.

With already 40 percent of revenues generated on the company’s online store — significantly above the average 5 to 7 percent benchmark estimated by PwC — Acbc is committed to grow that figure further.

“When we established the company in 2017 we had to look ahead of time to the following 10 years. I consider e-commerce as a fundamental asset that is going to account increasingly more. At the same time the interaction between on- and off-line will strengthen,” noted Giacobbe. “It’s been always about [catering to] the client’s needs rather than the technological value of e-commerce,” said Giacobbe.

The strategy encompasses a range of omnichannel initiatives, such as a delivery from store service that is encouraged through a discount policy, which also allows the company to collect data on its clients and cut storage costs.

In addition, the footwear label will soon debut a “Netflix-style” rental service, with three subscriptions spanning three to 12 months, with which Acbc provides the outsole for free and delivers a new upper each month to the customer’s door. The label is evaluating the opportunity to debut an installment plan service, through which customers will be charged 9.90 euros each month for one year.

“We’re offering alternative methods of purchase as traditional models are going out of fashion and we need to find new ways to engage with our end-users,” said Giacobbe, noting they are all intended to drive sales rather than just offer enhanced experiences.

Acbc’s plan to increase its direct-to-consumer business model will also address the company’s retail network. The store located inside Milan’s Malpensa airport is the only directly operated unit and Giacobbe said he is committed to convert the 11 European franchises to direct retail in 2020 as he aims to “spread our message consistently and avoid diluting our DNA.” 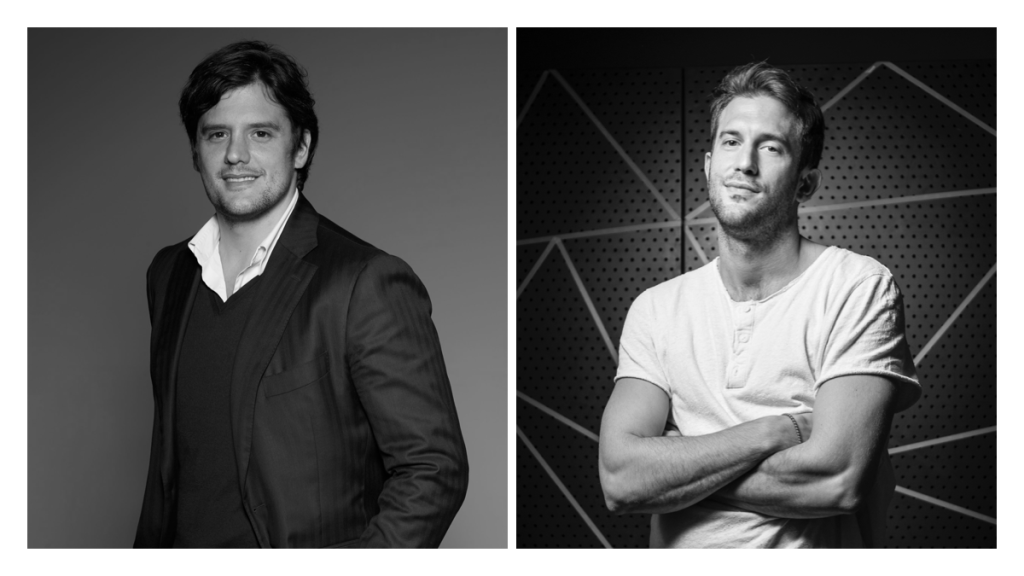 In 2019 the company expects to generate 9 million euros in revenues, up from 1.2 million euros last year. In 2020 Giacobbe forecast to double Acbc’s sales and reach the 70-million-euro threshold in 2023, with direct retail accounting for 80 percent.

Italy and Germany are the markets where Giacobbe wants to increase the direct-to-consumer business, while looking to expand Acbc’s presence in China through the opening of additional franchise stores. In order to penetrate the Japanese market the company is negotiating with a local distributor while the U.S., he said, “is a market we’re looking at despite being cautious because of the numerous difficulties in trading.”

Setting up a traditional wholesale distribution is not in the pipeline, while online wholesalers might represent a target for the future. “Our fear is that the message gets diluted as you end up among other brands with no spotlight on your DNA or explanation on the concept,” Giacobbe noted. “Our product requires an immersive experience to be understood,” echoed Iannuzzi.

Although focused on footwear, the cofounders said their travel-oriented, multipurpose approach could easily be transferred to other product categories, such as backpacks and clothing. “We always think about products that can make one’s life easier and dynamic: modular, flexible, adjustable on-the-go, smart and sustainable,” noted Iannuzzi.