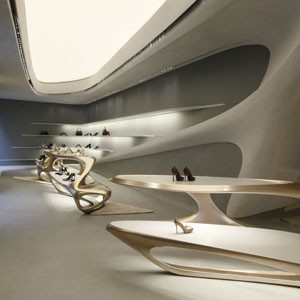 Stuart Weitzman is entering a new phase of growth.

With a sleek, splashy store designed by Zaha Hadid set to open in Milan Monday and at least 50 new doors in the works by the end of 2014, Weitzman is on the move. As part of the brand’s expansion strategy, former vice chairman Wayne Kulkin has been named chief executive officer, effective immediately.

Kulkin started at the New York-based firm 23 years ago, and has held various positions through the ranks, from salesman to brand president.

“He came to me in shorts,” Weitzman told WWD. “He was a young kid. I’ve found that when you have someone in your business that has worked in every aspect of it, you can’t find someone else like that. He’s basically had the ceo position for the last five years.”

Kulkin will continue to report to executive chairman, Weitzman, who said that the new ceo’s mandate is to facilitate the rapid growth of the $300 million business via new hires. The brand, which also just hired former Chanel Ltd. head of marketing Roberta Lee for the new post of vice president of marketing, is still on the hunt for a president and head of retail.

Lee, who will report to chief marketing officer Susan Duffy, will focus on the Asia-Pacific region, as she did in her previous job.

As it is for many brands today, Asia has become a vital source of growth for Weitzman, who will open 20 stores there by 2014, half of which will be located in China. According to The Jones Group Inc.-owned firm, even though Weitzman’s business has been built on wholesale operations, it is now emphasizing direct-to-consumer growth.

Boutiques are not only a way to show the company’s full collection, but they also allow the brand to capitalize on tourists’ dollars, Kulkin noted.

“Our business was really domestically based,” the ceo said, adding that seven years earlier, 80 percent of its business came from North America. Today, the business is split evenly between international wholesale sales, North American wholesale sales and global direct-to-consumer sales.

With the brand’s international business over the next two years expected to expand at a 50 percent rate and its U.S. business anticipated to increase at a 5 to 10 percent rate, the company looks to derive growth from its nascent handbag line.

According to Kulkin, Weitzman is reinvesting in handbags, a category it has tried to build out in the past. Currently, handbags make up just 5 percent of sales, but the brand is looking to build the business to 20 percent by using its own stores as a “laboratory” for new styles. Once the collection is on firmer ground, it will begin selling bags, which will retail from between $595 and $1,200, to its retail partners.

What’s different this time about Weitzman’s handbag line is that there is a now a comprehensive team of designers and merchants behind it, which is in the process of creating its collection for fall 2014.

In the immediate future, the brand is turning its attention to its Milan store plan, which, according to Weitzman, marks a new chapter.

“We really started a season or so ago to make some big moves to make our company well-known around the world,” the designer said, explaining that after launching a recent advertising campaign by Mario Testino, featuring Kate Moss, the brand looked at further revamping its image.

“We wanted a unique design,” he said, referring to the company’s stores. “We wanted to make some noise. I definitely didn’t want a traditional architect.”

As a result, Weitzman approached Hadid to design the company’s 2,500-square-foot bi-level flagship on Milan’s Via Sant’Andrea.

At first Hadid, who has designed noted buildings such as The London Aquatics Centre and the MAXXI National Museum of the 21st Century Arts in Rome, declined the project, which would mark the Weitzman’s 100th standalone store.

“I think it was easier to get my shoes into Bergdorf Goodman than to convince this woman,” Weitzman said with a laugh, but over time, Hadid’s “nos became maybes and her maybes became yeses.”

With creative control of the store’s interiors and exteriors, Hadid and her team created an environment where customers can interact with the product and displays in a unique way.

According to Weitzman, shoppers will be able to sit in the fixtures, which house some of the display shoes. Hadid and her team also came up with a sales concept to go along with the fixtures. Essentially, when a customer is waiting for a salesperson to retrieve a pair of shoes, a store clerk will monitor which shoes the customer is admiring as she waits. The clerk will then radio down to the salesperson to bring along that pair of shoes as well.

The brand intends to use Hadid’s design and sales technique in stores in Hong Kong, Rome and in the Weitzman Madison Avenue flagship, as well as potentially in Paris, London, Shanghai or Beijing.

Calling her designs “living architecture,” Weitzman seemed equally impressed by Hadid as he was optimistic for his brand’s future.

“I think my next project is to get her to design a shoe for us,” the designer said of Hadid. “We fill a white space. We’re the first price in the [designer] salon and it just seems to be getting to be more and more of an advantage for us. Many of our customers from all over the world need the trends of the moment….They just don’t need them from designer shoe brands, they need them from us, too.”