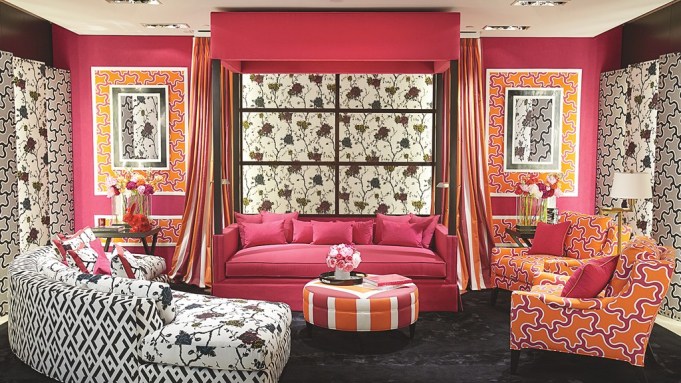 As DVF heads into its fifth decade, the company is banking on accessories — and it has big plans to make them a powerhouse category.

“Accessories are extremely important,” said Joel Horowitz, the company’s cochairman. “When I came to the company two years ago, I presented a business plan that called for significant investment in the accessory business of what we would do internally, as well as licensing.”

Horowitz estimated that, upon his arrival, accessories made up less than 10 percent of overall sales. Today, that number has risen to 15 percent, and it continues to grow.

“The plan calls for it to be almost 50 percent of the total business in a five-year period,” said Horowitz.
“Accessories are a significant part of our future.”

Handbags and footwear are expected to be the driving factors; the categories are tied for biggest sales-
generators among the brand’s accessories offerings.

“They will probably remain fairly equal in size [in terms of sales] because I think they have equal importance,” said Horowitz. “However, if you include small leather goods in the handbag category, then that would outrank footwear.”

In the coming seasons, footwear will receive a major push, with new offerings in the casual market.
“Up until spring 2015, we’ve been 80 percent, if not more, focused on evening,” said Horowitz. “The whole world — not just in footwear — has been moving to a more casual look. So, a big expansion for us will be on the casual-footwear side of the business. For spring, the collection will be [split] 50-50 between casual and dress. Footwear is a license, and it’s such an extension of the ready-to-wear that we already do. I would like to get it to the point where we are selling, at least in our own stores, a couple of pairs of shoes for every dress.”

“There are a few reasons to do something with a license versus in-house,” explained Horowitz. “First, [it’s about] who is the best to design, produce and execute the business. When you look internally at what your core competencies are, you have to be realistic from a personnel standpoint, an expertise standpoint and a financial standpoint. When it came to handbags, we felt it was something we wanted to control internally. We were able to have the relationships from sourcing and creative standpoints. That became the natural product expansion for us to focus on internally. Footwear is much more specialized. It’s a much more complicated business. There are much more sku’s.”

“One thing Diane always says is, she loves her legs but counts on her feet, so she loves working with us on shoes,” Schwartz said. “The shoes are very much like her key phrase: sexy, effortless and on-the-go.”
Marchon’s senior vice president of global marketing, Mark Ginsberg, attributed DVF’s success in eyewear to the designer’s wide appeal.

“It is trans-generational, attracting women from 18 to 80,” he said. “The DVF woman is successful, independent, feminine and fearless — all attributes that are easy to identify with.”

Haskell Jewels, which produces DVF costume jewelry, is the latest addition to the licensee roster, with initial product due out for spring. The category, according to Horowitz, was a no-brainer for the brand.

“Any category that we go into has to be a natural extension of what the brand stands for,” he said. “Diane has one of the most extensive jewelry collections in the world, and we have this long relationship with H. Stern for fine jewelry, so it just made sense to do a fashion jewelry line that’s more affordable for most consumers out there. It also gets more product of ours onto the main floor in department stores, which gets you more of an entry-level customer, which you can then move to other categories, such as ready-to-wear or handbags. The fashion jewelry just expands your consumer base.”

Horowitz noted that while fine jewelry is not a significant contributor to overall sales, the category remains important to the company.

“It is so well-placed for the brand,” he explained. “Just a couple of weeks ago, they sold a $98,000 bracelet. When you get items like that sell and have such a waterfall effect on the whole brand, it does very nicely. It will never be a big percentage of the business, but, as an add-on to the brand, it fits in perfectly for what the brand stands for.”

Synergy between DVF rtw and accessories remains a constant driving factor, especially when it comes to future expansion.

“The most important question that you have to ask is: Is the brand legitimate to be in that product category to begin with?” said Horowitz. “You don’t want to put your name on different products just because you have a brand name that people like. You can sell virtually anything with a good name, but you want it to be legitimate to the brand. I wouldn’t go into men’s neckwear tomorrow. We could probably sell a lot of DVF printed ties, but men’s wear is not something that is on our radar.”

Beyond the products themselves, DVF plans to ramp up the accessories business by investing more in marketing and public exposure. “We will add accessories to national advertising,” said Horowitz. “We have been featuring handbags, and we will be including footwear as we move forward, as well as other licensed products, like jewelry. There will also be a much bigger effort online with digital marketing, where we can focus on special categories of business, which you don’t tend to do in national ads.”

“DVF accessories convey the whimsical and sophisticated appeal the brand is so well-known for in ready-to-wear,” said Erica Russo, Bloomingdale’s operating vice president of fashion direction, fashion accessories. “[The DVF customer] is a worldly, fashion-forward female who identifies with the cultured
lifestyle that Diane lives personally and inspires us [to live] through her designs.”

To illustrate just how serious the company is about building the accessories business, Horowitz points to recent changes within DVF’s own stores.

“One of the major investments that we’re making in all of our stores is the square footage dedicated toward accessories,” he said. “While accessories is now 15 percent of our overall sales, we’re allocating approximately 40 percent of square footage in our stores to accessories because we believe that, in order to build the business, we have to do it ourselves. To show that we’re a real player in the space, we have to do the investment ourselves. Therefore, we’re allocating a disproportionate amount of square footage to the size of the business today, but, eventually, that is our goal. I want accessories to be 50 percent of our revenue.”