Italian accessories brands pay homage to tradition and craftsmanship while pushing boundaries with innovative techniques and touches of color. 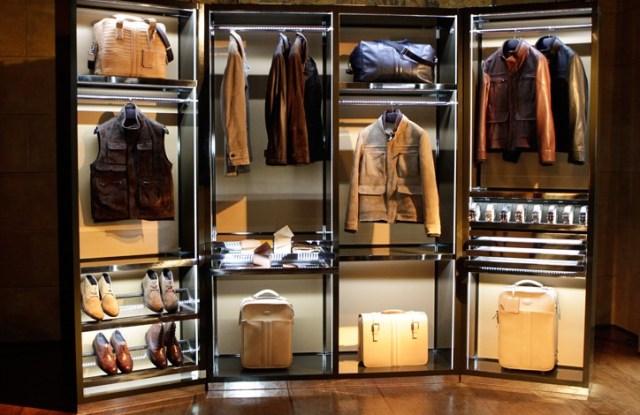 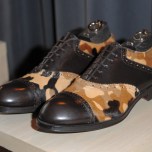 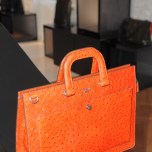 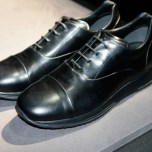 Italian accessories brands paid homage to tradition and artisanal craftsmanship, while managing to push the boundaries with innovative techniques, touches of color — from red to purple — and quirky combinations of materials and hides.

This story first appeared in the January 19, 2011 issue of WWD. Subscribe Today.

“We are specialists in the treatment of leather,” remarked Diego Della Valle, Tod’s chairman and chief executive officer, highlighting the company’s distinctive feature. And from this axiom, Tod’s reworked its timeless Winter Gommino in supple variations of brushed suede and vintage calfskin or ponyskin in sand, stone, honey and chocolate hues. In tune with a more formal trend, the brand showed a black patent loafer with a wedged rubber sole in lace-up and slip-on versions. IPad cases in a range of hides, including crocodile and python, and luxurious shearling jackets also were hits among the functional range of products.

Elsewhere in the Tod’s stable, Hogan’s collection was dubbed “Future Roots,” and was just that: a combination of traditional and artisan treatments and high-tech innovation, said group vice president Andrea Della Valle.

The brand, controlled by Tod’s SpA, showed sneakers crafted using a technique where the leather that makes up the upper is lined on the reverse side then turned inside out and hammered out hiding the stitching. “It’s informal and modern, clean and essential, in sync with Hogan’s urban-chic tradition,” said Della Valle.

At Sergio Rossi, creative director Francesco Russo played off the house’s tradition, while selectively adding more contemporary touches. Mixed-media pieces, as in the oxfords with camouflage-printed pony inserts were standouts, as were the gold-coated calfskin moccasins.

Valextra introduced its calfskin cover for BlackBerry’s PlayBook in colors such as smoky London gray, royal blue, ocher and the brand’s signature pergamena white. “This is a practical object, yet it’s luxurious, high quality and stylish,” said chairman and ceo Emanuele Carminati Molina. “Here is a synergy between two brands that share the same vision and combine functionality and creativity.”

Church’s put a new spin on its classic oxford brogue and the focus is on the sole made with scraps of discarded hides, which has a polychrome effect. In suede, often treated to look aged, it allows a less formal look.

Fratelli Rossetti president Diego Rossetti said customers are “returning to companies that have a specific know-how.” Building on that strength, the firm is rejuvenating its product offer with the help of designer George Esquivel. Hence, the use of more color, such as loafers in blue and red; textures that appear “not so perfect,” and pumps and moccasins put in washing machines to achieve a used look, said Esquivel. “There is more playfulness to the collection. Shoes don’t have to be so serious,” he said.

Drawing inspiration from the late Fifties and Tom Ford’s “A Single Man,” Furla owner and chairman Giovanna Furlanetto said the collection is about “versatility.” Structured and linear ostrich-printed leather folder cases take center stage in orange and ocher, but also more basic sand and gray hues. Totes in crocodile-print leather or ponyskin combined with napa add a contemporary edge to the collection.