The Polarizing Allure of Sneaker Culture

May has been Jordan-mania in the sneaker world.

In the wake of the ESPN and Netflix documentary “The Last Dance,” sneaker activity around Michael Jordan’s Air Jordan brand grew to a fever pitch, supported by nostalgia and its heritage. Sneaker prices skyrocketed as resellers hoped to capitalize on the superstar’s legacy, and resale sites reported increased searches and traffic for Jordan sneakers. A pair of Air Jordans also set a new sneaker auction record at Sotheby’s, selling for more than a half million dollars.

But amidst the moments, there was an anomaly.

On the one hand, Rally, the alternative investment app, saw the value of its game-worn and autographed Air Jordan 3 sneakers from 1988 leaping by more than 250 percent. Then Vice on May 25 released the documentary “One Man and His Shoes,” which looked at how Air Jordan sneakers have been the center of criminal activity that have cost young people their lives. The documentary was originally planned to debut during SXSW in March.

Clearly, there are two sides to the Air Jordan sneaker phenomenon, which began in 1985 when he signed the deal with Nike. There is the sneaker that was almost exclusively for play and fashion and became a valuable commodity comparable to a vintage Rolex or Hermès Birkin bag. Then there is the sneaker that is often at the center of tragedy and crime.

The stark contrast is a phenomenon in itself. One could look at the sneaker and marketing world as “before Jordan” and “after Jordan,” in that after the introduction of the Air Jordan brand, the perception of sneakers and their worth ascended — for better and worse. People have been subjected to theft over items like expensive jewelry and handbags, but robbing someone of their sneakers was a new realm. This sad reality doesn’t fall squarely on Nike and the Jordan brand, as unfortunately, many people were harmed for wearing other sneaker brands and sports memorabilia as well. Sports Illustrated reported on the phenomenon at length in its May 1990 cover story “Your Sneakers or Your Life,” which prominently showed the Air Jordan V sneakers.

“One Man and His Shoes,” the documentary by filmmaker and journalist Yemi Bamiro, begins with the history of Air Jordan, delves into the release and marketing of his first signature sneaker and Jordan’s marketability. Later, the documentary looks to the consumer.

“The entry point [for the documentary] was always Jordan collectors,” Bamiro said. “[But the documentary] became about telling a bigger story and a look in-depth at this sneaker from a racial, historic and business perspective.”

Bamiro, who hails from southeast London, is not a collector of Air Jordans or any sneaker brand, but admitted an affinity for “trainers.” “I’ve always understood subconsciously [that] the Air Jordan is the Ferrari of sneakers,” he said. “It’s like the pinnacle, the highest.”

He started his interview process seven years ago with collectors such as Jumpman, who appears in the documentary and shows cases of size 13 and 14 Jordan sneakers lining his basement walls and positioned in the center of the room. The collector from Detroit also has unopened Wheaties boxes with Jordan on them and old bottles of Gatorade. The insurance policy for his collection is in the seven figures.

“As a journalist,” Bamiro said, “I wanted to explore everything great about this sneaker and the unfortunate history of this sneaker, [too].”

One tragedy is discussed in the film through Dazie Williams, whose son, Joshua Woods, was murdered in 2012 over a pair of Air Jordans. Williams and her daughter walk viewers through the murder and the trial.

“The audience would be surprised that it still happens,” Bamiro said. “They associate it with something that used to happen in the Eighties and Nineties. When you think of culpability, it becomes a different film about social policy and economics.” 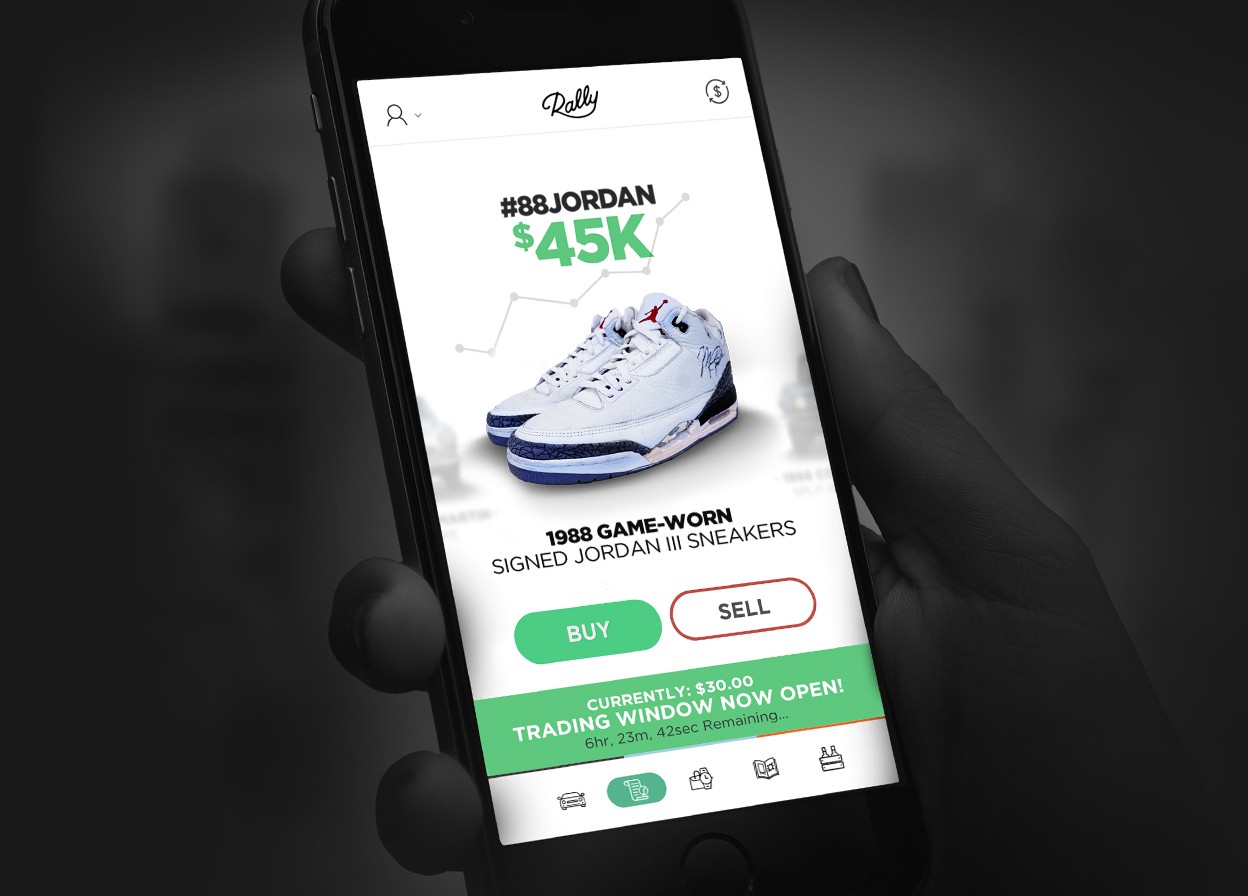 Unlike Bamiro, who describes himself as a Londoner fascinated with American politics and pop culture, Rally cofounder Rob Petrozzo has always been deeply immersed in New York City sneaker culture. “When I was young, my parents weren’t buying me Jordan sneakers, but there was this idea you were going to get robbed,” said Petrozzo, a Brooklyn native from Sunset Park.

Petrozzo saved money from his first job as a teenager to buy his first pair of Air Jordan sneakers, because his parents declined to. In the mid-Aughts, he immersed himself in the sneaker world, building relationships with retailers and eventually gaining access to limited-edition drops before the general public.

He started Rally with cofounders Chris Bruno and Max Niederste-Ostholt in 2015 to democratize auctions that, at the time, were reserved for a small group of buyers and sellers. He said Rally’s SoHo showroom space in Manhattan developed from the sneaker culture of the Aughts.

“We realized everyone follows the headlines,” Petrozzo said, adding that the app is for people who “don’t have the money to buy outright the things they want, but have a knowledge of what they want to invest in.”

There are 100 items on the Rally app, including Jordan’s game-worn jersey from 1998 when he made 5,000 career assists and a Jordan PSA-10 rookie trading card. (The IPO for the card was planned for June, but moved ahead with “The Last Dance” documentary.)

The jersey was listed on March 13, with shares selling out in minutes, and two months later a buyer purchased it, which resulted in more than a 200 percent annualized return to investors. The rookie card was listed on May 8 with a $40,000 value and sold for $90,000. But the most notable movement on the app surrounds the Air Jordan 3 sneakers that had shares increase 250 percent in recent weeks.

“A lot of buyers grew up and see the hype around the sneaker space,” Petrozzo said in explaining the app. “The market has been coiling like a spring over the years. I can save now and can actually spend it to get a piece of what I lost when I was younger.”

Petrozzo got more into sneakers around when Nike and Jeff Staple’s collaboration Nike Dunk sneaker made headlines. Since then, the sneaker community has gone mainstream, booming due to streetwear’s rise to prominence in fashion, the launch of national and global resale platforms, and stories of millionaire sneaker traders that brought mystique to the subculture. It also boomed from celebrity participation, including Kanye West’s public rants about Nike and the launch of his Yeezy line, Rihanna’s Fenty Puma collection and luxury labels looking for their signature silhouette, such as Balenciaga’s Triple S sneaker and Louis Vuitton’s Archilight.

“I think the community around sneakers and around fashion has a much wider reach now,” Petrozzo said. “The community is based on access, and secondary markets, and everyone has the chance to be a collector. I think that expansion of the community and the mainstream nature of collecting has made it safer as a byproduct.”

It’s basic economics: A small product supply catalyzes increased demand, and in turn increases a product’s value. But the perceived value of rare and hyped sneakers supersedes the products themselves. For instance, Woods’ sister says in the documentary that she received a pair of Air Jordan 28 sneakers before their release date, in condolences for her deceased brother. But she waited a month after the sneakers hit retail to wear her pair.